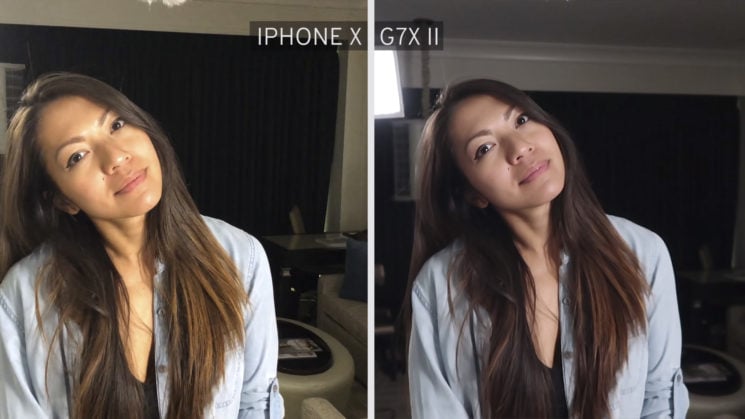 There is no doubt that increases in smartphone camera technology has made a huge dent in the sales of compact cameras. Compact cameras, also known as point and shoots, vary wildly from very low end to fairly high. And for stills photography, there’s no doubt that most of the current top smartphones can easily keep up, and even beat, the selection of compacts that are out there.

But what about for video? That’s what Potato Jet aims to find out when he puts his shiny new iPhone X up against vlogging staple, the Canon G7X Mark II. Perhaps not surprisingly, the iPhone actually won in some areas, although the G7X II definitely shone in others. Ultimately, it looks like you’ll mostly be good with either, although specific needs may demand one over the other.

While aimed more at vloggers than cinematic video, it’s a great test. After all, nobody’s shooting cinematic stuff with something like a G7X Mark II. And many vloggers are using both that camera or an iPhone. So, it’s a pretty fair and reasonable comparison. So let’s see how they did. 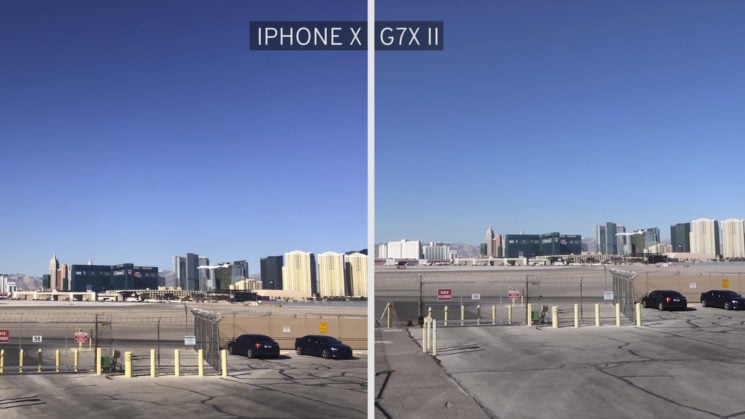 It’s probably not that much of a surprise that the iPhone X wins out when it comes to detail. After all, it shoots 4K whereas the G7X II is limited to 1080p. That extra resolution, despite being a smaller sensor is most definitely noticeable. Where it does start to fall apart, though, is when you zoom in. This is basically because the iPhone uses digital zoom where the G7X actually has a real zoom lens. 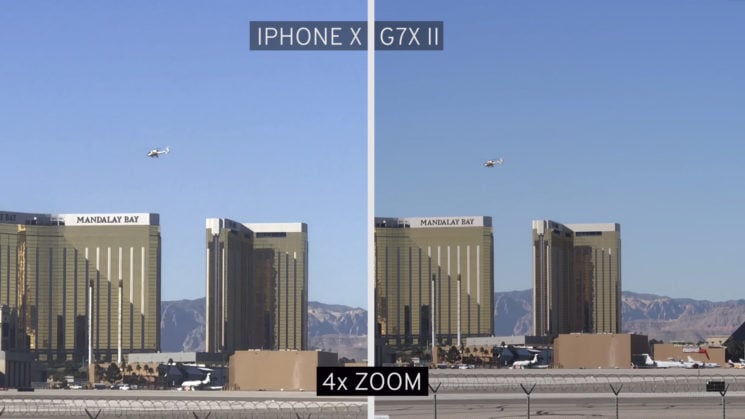 One thing that was particularly interesting in this bit of the comparison was how much better the iPhone seems to handle sunset scenes. There’s a lot more colour in the sky as well as brighter shadows with a little better colour and detail. 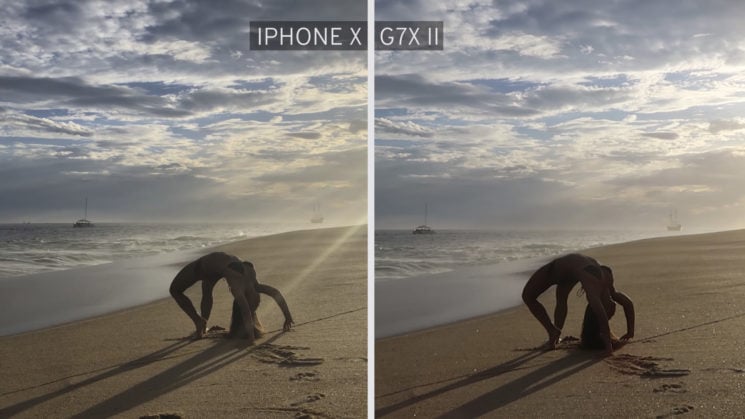 Well, this is where we see a huge difference between the two, and where the G7X II’s sensor shines. The “larger pixels” of the G7X II’s bigger sensor allow it to see much better in the dark. It also manages it with less noise, fewer compression artifacts and smoother colour, too. Both cameras were set to automatic exposure for this test, which is typically how a vlogger might use such a camera. 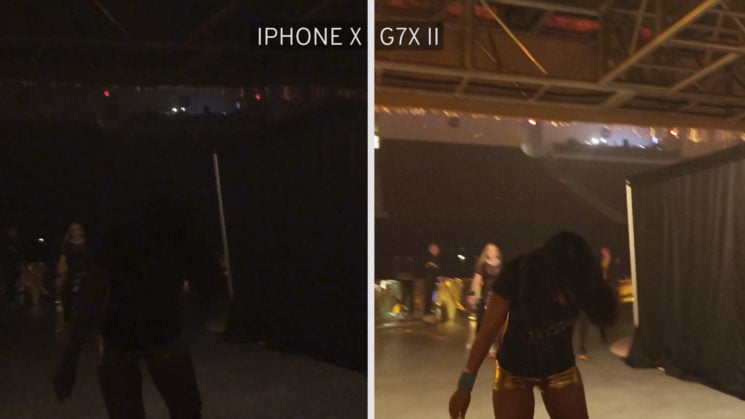 Interestingly, when the cameras are outdoors at night, rather than in complete blackness, the iPhone actually seems to do a better job, generally making for a lighter scene with more vibrant colour and, obviously, more detail. 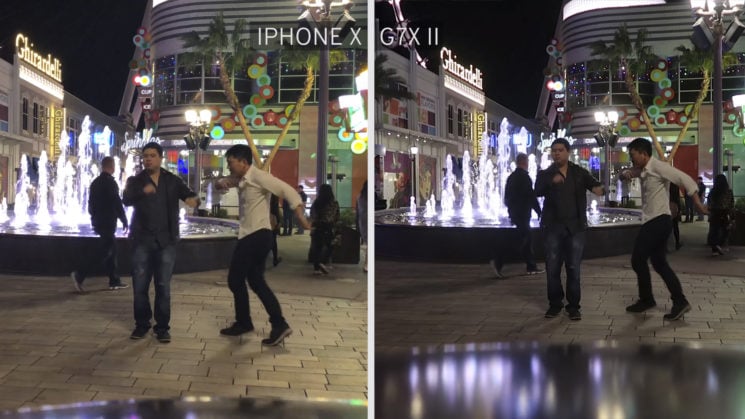 This is another area where the iPhone X absolutely kills it. After all, it can shoot up to 240fps at 1080p whereas the G7X II can only do 60fps. Of course, for probably 95% of the slow motion shots most vloggers will ever need to do, 60fps is plenty fast enough. If you’re playing back at 24fps, that’s a 2.5x slow down on your footage. And the bitrate is probably a little higher on the G7X II, too

But, if you’re regularly shooting fast moving subjects that you really want to slow down, say BMXers or skateboarders, then that 240fps might be an important feature. And don’t laugh, Braille Skateboarding has over 3 million subscribers on YouTube, and all of their slow motion footage is shot with iPhones.

This is an important one if you’re filming yourself. Highlight roll-off. With the G7X, the slightly flatter appearance retains a lot of the detail in the brightest parts of the skin. On the iPhone, though, the bright bits tend to suddenly pop to brightness rather than transition gradually, giving the impression that skin is very oily or sweaty and shiny. 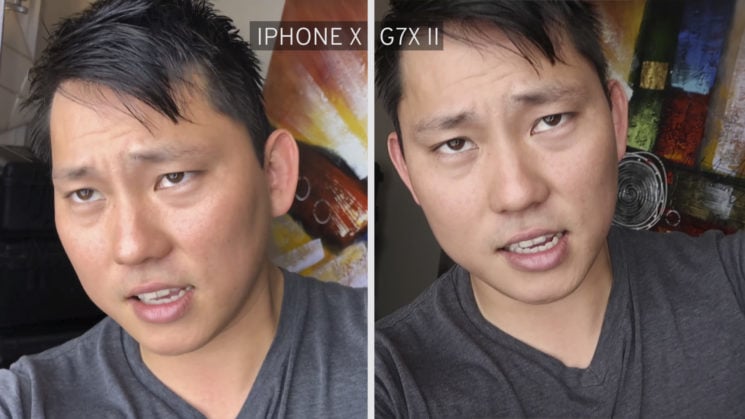 The iPhone uses tiny lenses, as it’s a tiny camera. As such, any kind of stabilisation also has a very tiny range of movement. So, it’s only going to work well when you’re really trying to steady yourself. If you’re just handholding and walking around, it’s not going to perform miracles. The larger lens, sensor and mechanics of the G7X Mark II easily seem to win out here.

Of course, this is going to be subjective, and it’s going to vary a lot depending on the conditions in which you’re shooting. In an indoor environment, especially if it’s somewhat treated for sound, or just a room full of things not bouncing sound around, and you’re close, they both sound quite good. Personally, I prefer the cleaner sound of the iPhone in this particular test. The G7X II sounds a little hollow.

The other thing to think about, especially if you’re taking it outdoors, is that the G7X II has no microphone input. At least with the iPhone you can hook up a Rode smartLav+ or VideoMic Me to get some better quality audio, and hopefully cut out any wind & environment noise.

Potato Jet goes through a few more differences between the camera and his conclusions.

But, ultimately, it’s going to depend entirely on your needs.

« Kendrick Lamar bans pro photographers from his concerts, only fans can take photos
For the first time in years, camera and lens production actually increased in 2017 »