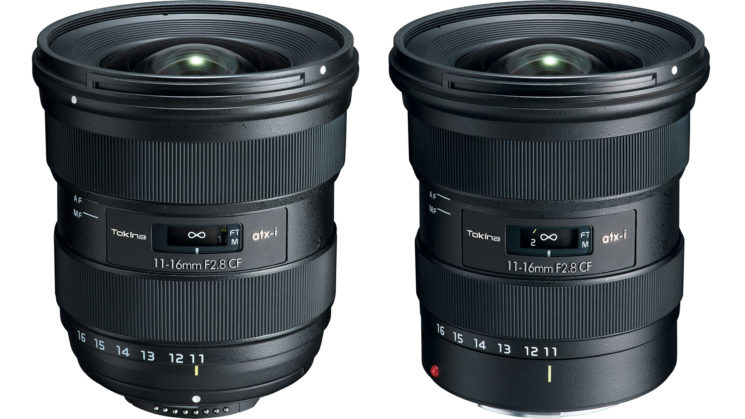 Tokina’s line of 11-16mm f/2.8 lenses for APS-C DSLRs have been pretty regularly recommended for years. They weren’t perfect, but they were rather good for what they cost. Tokina has now announced an update to this lens, in the form of the new Tokina atx-i 11-16mm f/2.8 CF for both Nikon and Canon.

The new lens promises increased clarity and sharpness as well as greater contrast, coatings to prevent flaring and ghosting and aspherical and low dispersion elements to combat chromatic and other aberrations.

This lens marks the first in a new series of “atx-i” lenses. Continuing on from Tokina’s AT-X (Advanced Technology-X) lenses, the new “i” means “interactive”, apparently. Exactly what that implies is anybody’s guess. But it also comes with a more modern looking simple design, that’s somewhat reminiscent of Sigma’s Art series.

As with its predecessors, it’s an autofocus lens offering the full-frame equivalent field of view to a 16.5-24mm lens if you’re shooting Nikon or 17.6-25.6mm for Canon. Neither lens has built-in stabilisation, but with a lens this wide, it’s hardly needed.

Traditionally, I’ve not been a massive fan of Tokina lenses, but the 11-16mm f/2.8 has always been one that’s stood out to me. It had a bit more barrel distortion than I’d like (certainly more than I saw with the Sigma 10-20mm f/4-5.6), but I always found it rather sharp and that wider consistent aperture is very nice. If this newest version doesn’t have the barrel distortion I’ve seen in the past (which the new aspherical elements might fix), then I might have to add this one to my shopping list.

Interestingly, only because it’s rare on a new lens these days, when you switch the lens over to manual focus mode, you actually get hard stops at each end of the focusing range. This could be very handy for video shooters who rely on having repeatable focus wheel movements.

The Tokina atx-i 11-16mm f/2.8 CF lens is available to pre-order now for Nikon or Canon for $449. Shipping is expected to begin around November 8th.

« Lightcore is a 5800 lumen LED light for video that’s smaller than a speedlight
Olympus announces the OM-D E-M5 Mark III with up to 6.5 stops of stabilisation and IPX1 waterproof rating »