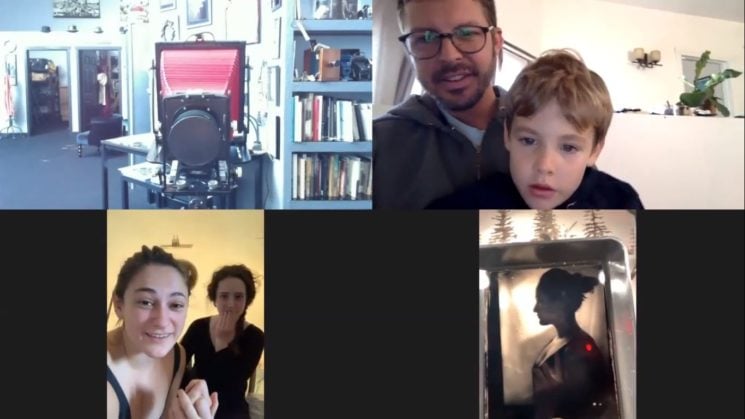 To keep themselves busy and creative in isolation, some photographers are turning to alternative shooting methods such as video chat. Shane Balkowitsch is one of them, and he did something that I find pretty extraordinary. He didn’t only conduct a portrait shoot online via video chat, which is amazing on its own. He created a wet plate portrait from his US home, photographing his friend in the UK via Zoom video call.

Shane called this portrait “A Long Distance Exposure In Isolation.” He and Morgan Barbour organized the shoot through Zoom video call, and as far as they (and I) know, this is the first-ever wet plate portrait taken this way.

Morgan had to find a good place to pose, and her friend set up a light and a white sheet behind her. She had to hold still for 60 seconds and Shane captured her portrait from his computer screen at his studio. “Our mutual friend Josh Withers was on the line with us offering his expertise and support,” Shane writes. “Our idea was to capture her silhouette in silver on glass.”

Here’s the photo that they ended up with. There’s even a mouse cursor in the upper left corner, which I don’t find to be a problem. The way I see it, it’s a witness of the different way of creating this wet plate portrait, as well as the circumstances in which it was created. In fact, I think that the mouse cursor adds to the whole story even if it wasn’t the original attention to have it in the picture:

Sean has also shared the video call between him, Morgan and Josh, so you can see what the long-distance photo shoot looked like.

I love seeing all the ideas people have during these crazy times, and this is certainly one of the ideas that I really like. Even though the global situation is quite gloomy right now, at least it will leave us with some fantastic and creative projects.