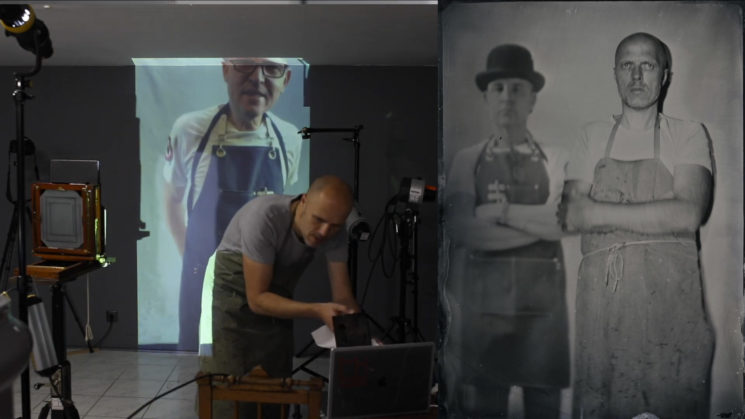 This is not about a technical perfect wet plate. This is about building connections from thousand miles away. Overcoming obstacles and being there for each other.

This 5-minute exposure captured more than just an image, it’s a short movie where the plate captured our thoughts and movements. Thanks to Shane Balkowitsch to be a part of it.

We couldn’t do a lot of things because of the pandemic, but I won’t let this get me down. I also didn’t want to wait for some things I wanted to do. That’s when I came up with the idea to do things differently. With that, I finally could meet Shane in a more direct way and we also were able to shoot a wet plate together.

For me, it was important to show that there are always ways to do something. The only limits we have are in our head. At this point, I want to say thanks to Pro-Digital in Vienna who lent me this wonderful Dedolight light head with the projection kit. This is an amazing tool! Without that, it would have been much tougher to make this happen. 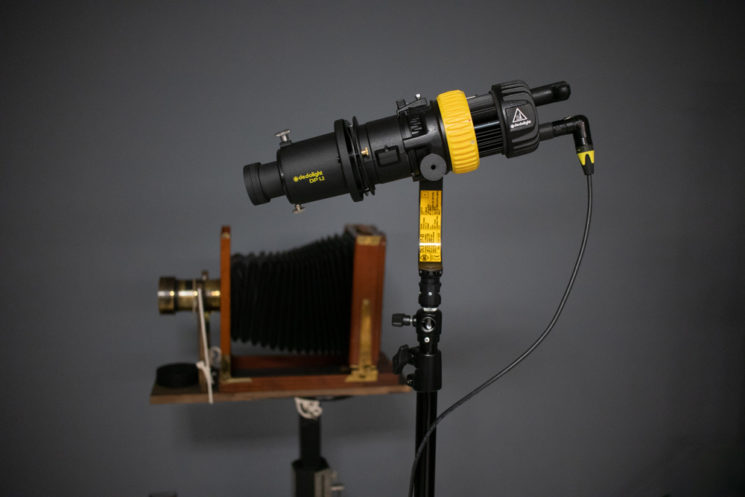 First I had to darken my studio because the tiniest light leak would be visible in a 5-minute exposure. I have blinds, but they were not enough. With a 5 minute exposure, a tiny light leak could make problems. that’s why I covered my windows behind the blinds with cardboard. 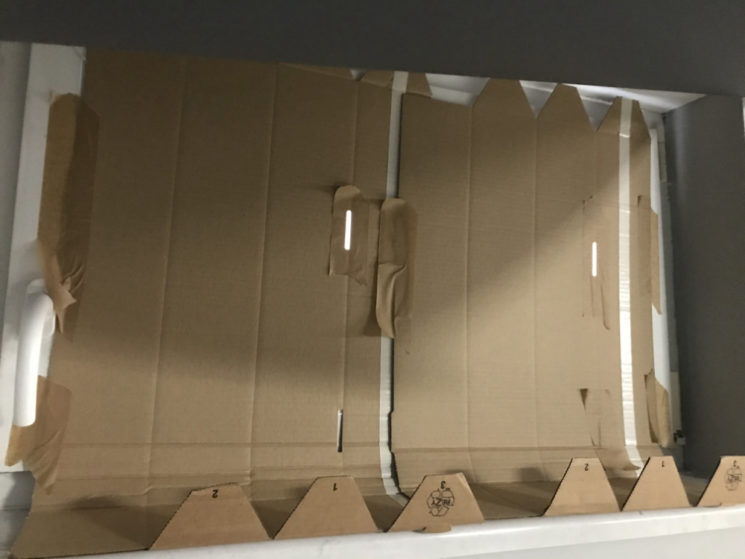 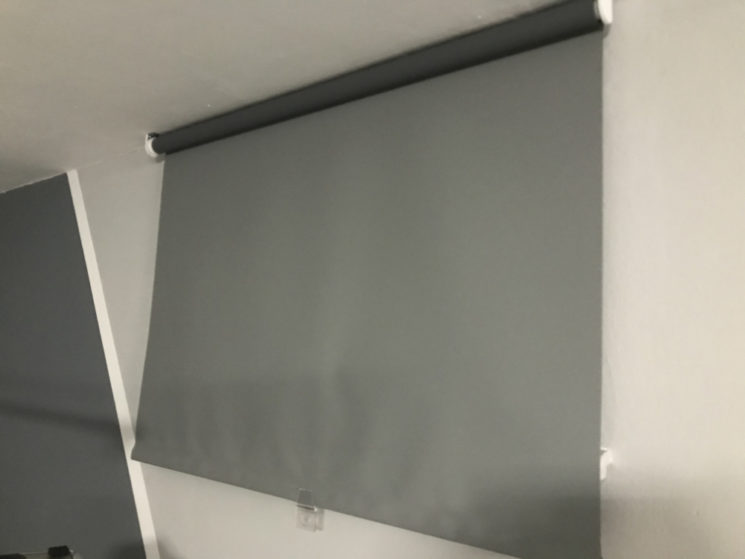 I wanted to have Shane’s background in my studio. That’s where things got tricky. As you saw, I used the projector on a gray wall to not overexpose the background and Shane.

During the test shots, I thought for a moment that I could use the projector light on me too – because on a digital image I looked as bright as Shane. But the wet plate process fairy was against me – The UV light just sees it differently. 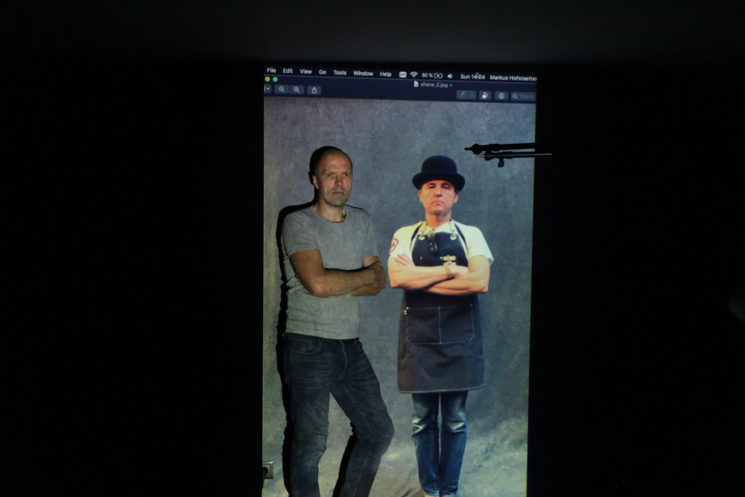 The digital test shot showed a well-matched level of exposure 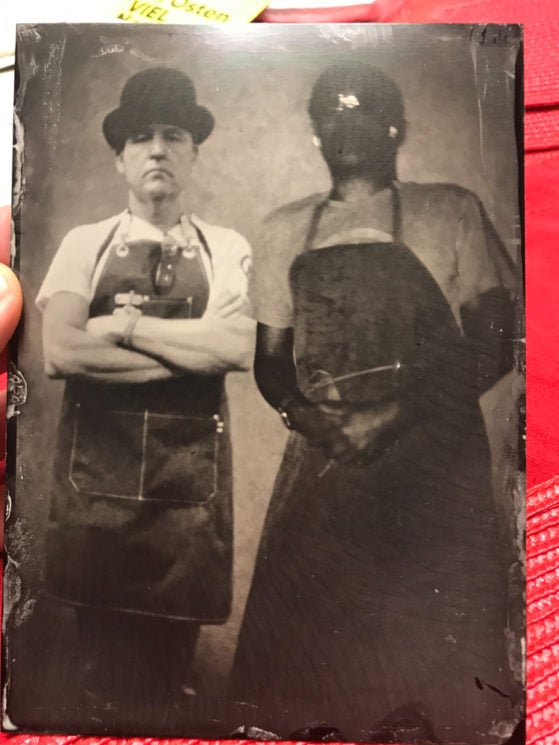 The wet plate test with the projector light didn’t turn out so well.

So I knew I needed an additional light source to get the exposure right.

I have a Hensel spot adapter for a strobe and tried this one first. But with the modelling light, the light was too uneven (it’s a 20-year-old strobe), it just works as a strobe. 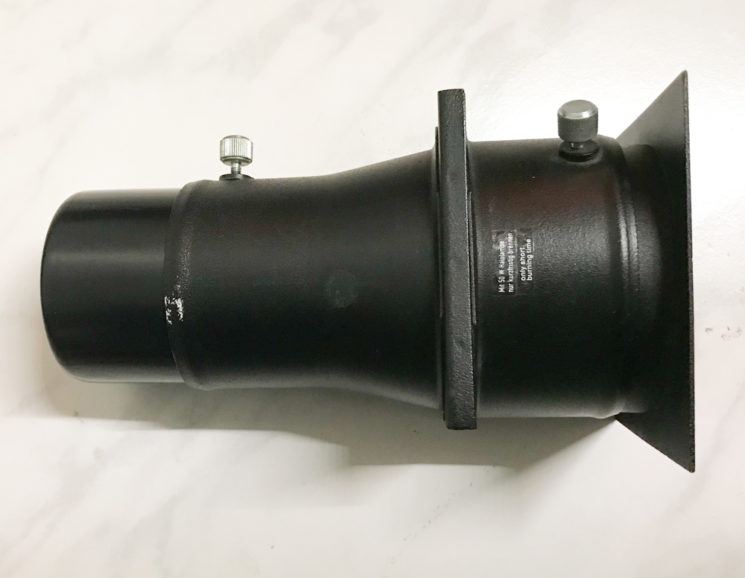 Then I tried it with the Light Blaster. This is a projector for speedlights where you can mount lenses on it to project images on as a background. But here I had the same problem, as soon as I used a flashlight, the light was too uneven. 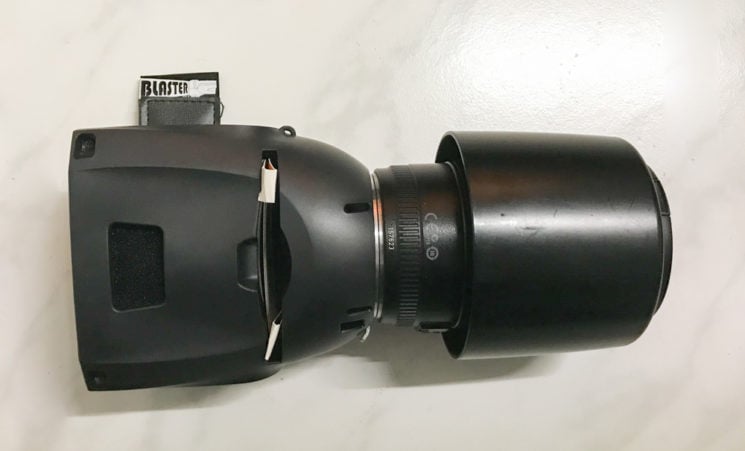 Then I remembered a workshop where the guy there used a Dedolight and that’s when I called Pro Digital and asked them if I can have one. Some days later, I went to their shop and Andreas explained all the possibilities I have with the light and showed me also the projection kit. From there I knew this is the right tool. Good to have local shops like that! 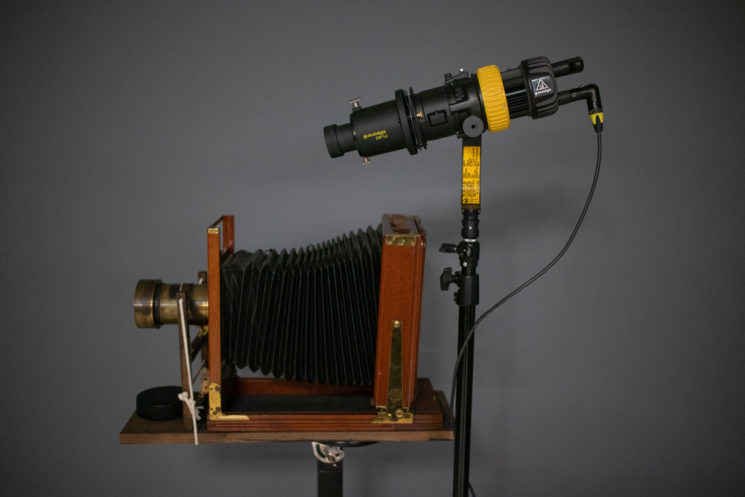 As soon as I got home, I made myself a gobo that looks like me. A gobo is a Graphical Optical Blackout.

I printed it and then I used a cutter to cut it out. 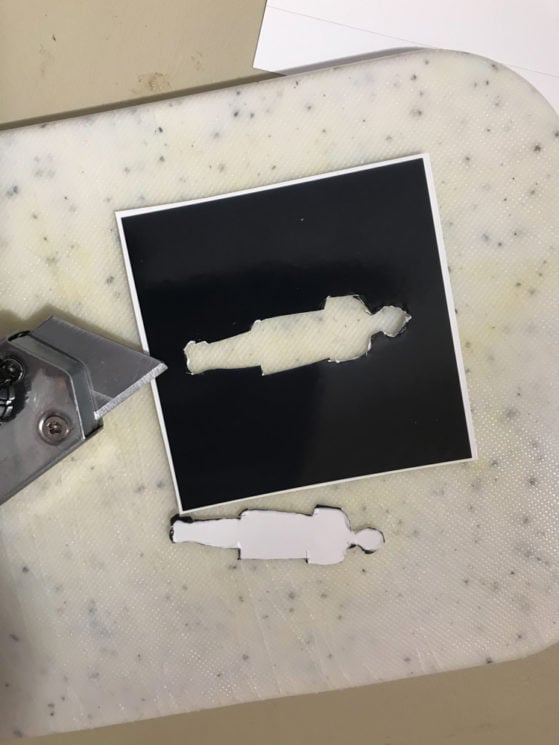 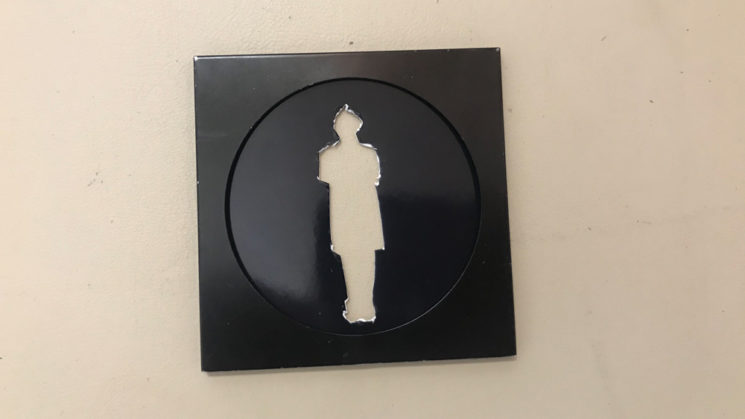 And with that, I could make a projection on myself that does not brighten up Shane and his background. 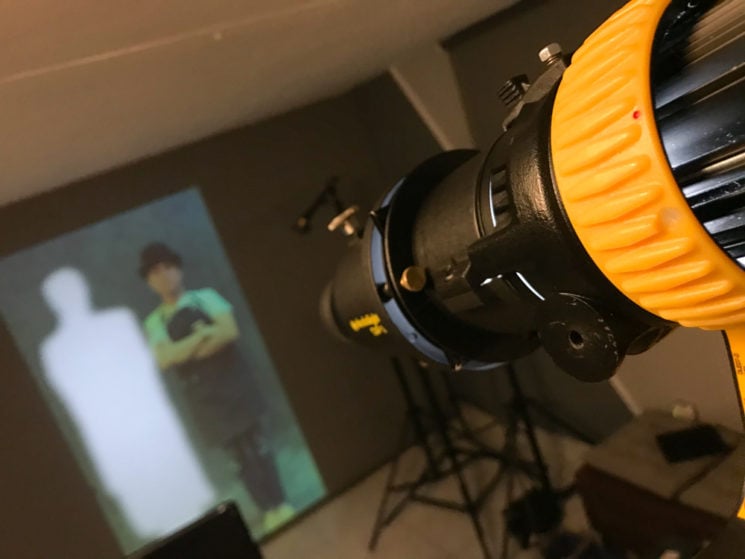 5 Minutes is very long for a portrait. And yet it was as short as I could get it. 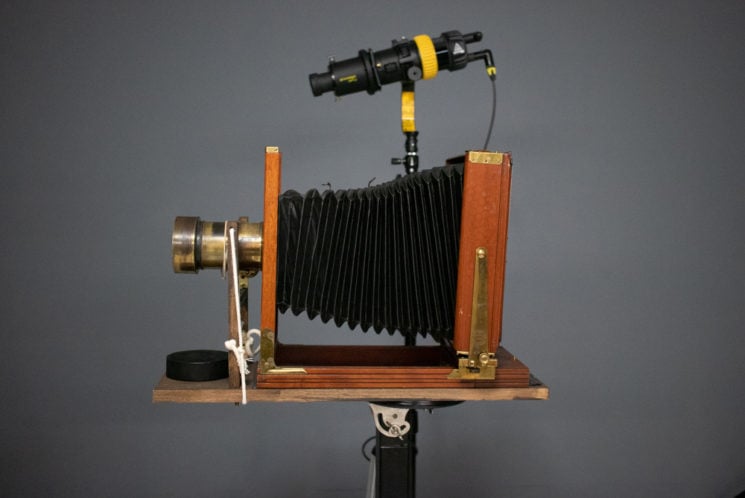 I could only shoot 13x18cm plates, because the camera would have been in the way of the projector for 8×10 plates (I had to go closer). 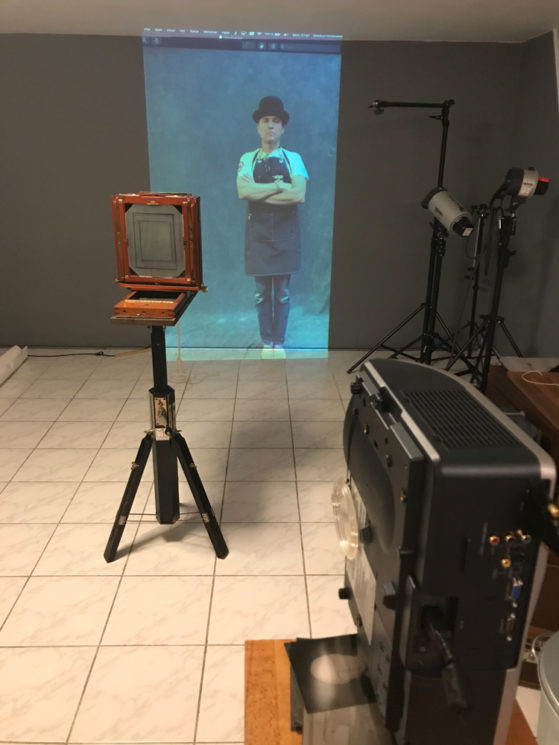 Using a longer lens would also have been an Issue, because then I would have an aperture of F4.5 or even F6. With that, the exposure times would have been twice or four times as long.

Aa you could see in the videos, I set the timer on my watch and released the lens cap with a string that I squeezed between the lens cap and the camera. An then it was only us two and 5 minutes in front of the camera.

Many of you have seen the apron I am using but only a view know that this apron is from my grandfather who used to have a shoemaker shop in this house. That’s the reason I like to wear it. Because it is part of our family. 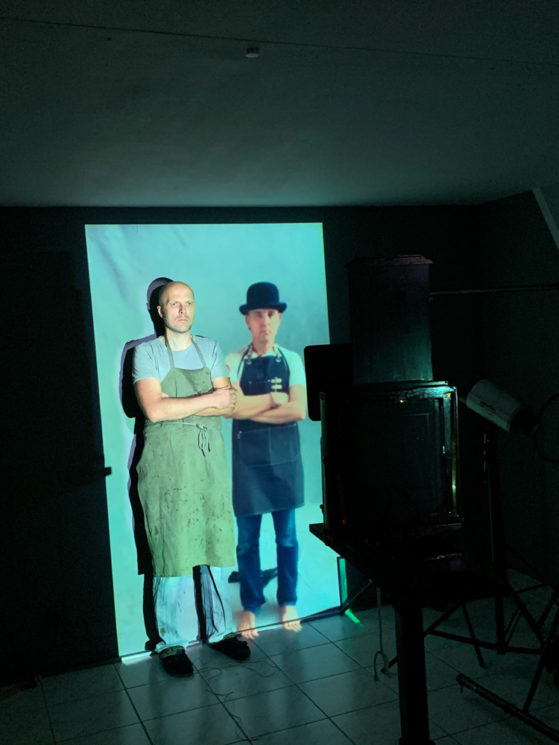 It was such a great experience and so much fun. I will for sure do it sometimes again. Maybe some people even want to do a portrait like that. It’s a great way to get memories during that time where we have to be at home. 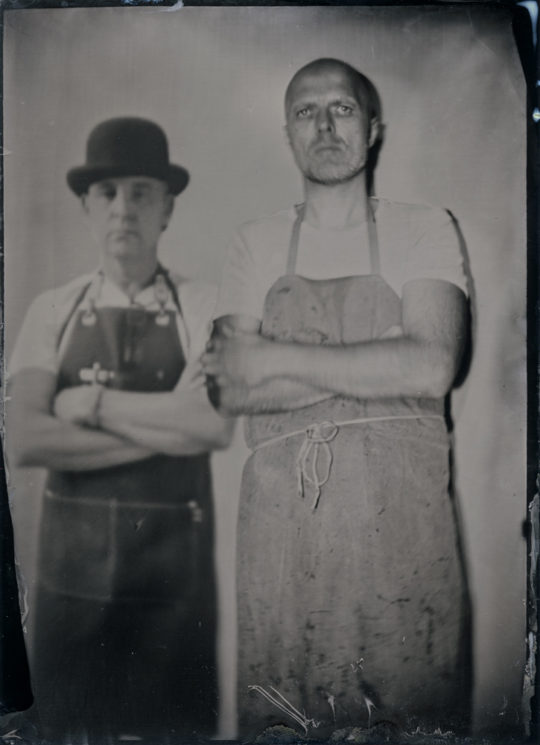 Markus Hofstätter is a professional portrait, events and sports photographer based in Austria. He has a passion for analogue and wet plate photography. He loves travelling to visit new places and meeting new people. You can find out more about him on his website or blog, follow his work on Instagram or Facebook or reach out to him through Twitter. This article was also published here and shared with permission.

This “long-distance wet plate portrait” was taken in isolation thanks to video chat
« New photographers, here are five things you should never buy
Nikon to exit Malaysian market in January 2021 »