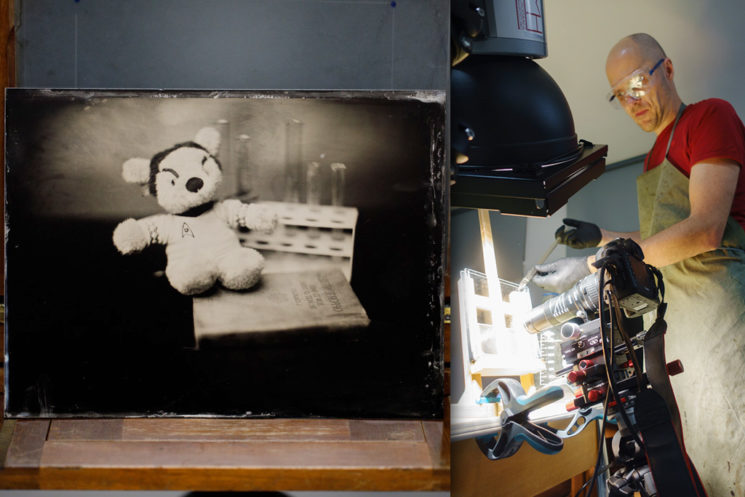 Normally I create photographs. This time, however, the final product is a video where you can follow the change of crystals/salts from the collodion wet plate process.

I have started this project because at my workshops I am often asked what happens when developing, fixing or sensitizing the plates. Of course, I have often tried to explain it, but a picture is worth a thousand words. That’s why this video was made.

But in the beginning, I was not aware that such incredible moving pictures were created. When we saw the video from the developer live, we were both mesmerized. Aja, we are Erich and me. Erich, a good friend actively supported me during the shootings. Thanks again! And because I’m at it, many thanks to Reinhold who made me the small glass tanks for filming – more on that later. Before I bore you with the technical details, here are the videos – yes, there are two, because I could not resist and additionally uploaded the ultra-macro videos as extra relaxation video.

First, the video explaining the colloidal wet plate process – all the close-ups of the chemicals contained in it were filmed with the Laowa Ultra 5x Macro including an intermediate ring on a Canon 5D MK IV – it’s not computer animations!

And now the relaxation video in 4K:

Now I can introduce our model, which could not have been better suited to the project. Science Officer Mr. “Teddy” Spock – sitting on the right book “opportunities and how to make the most of them”? 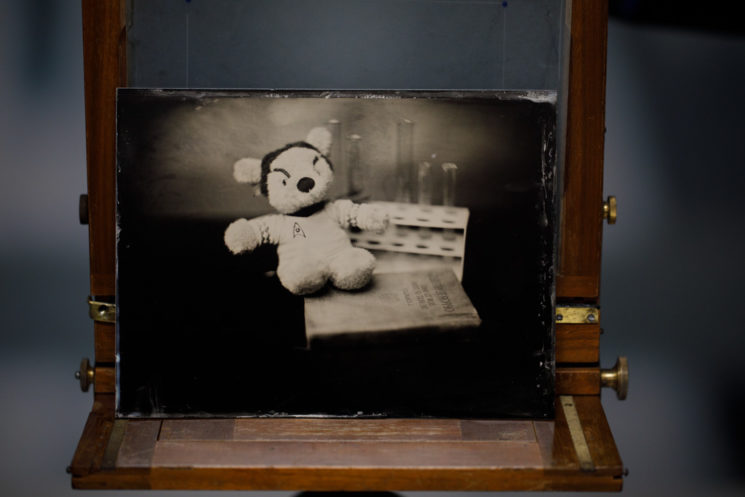 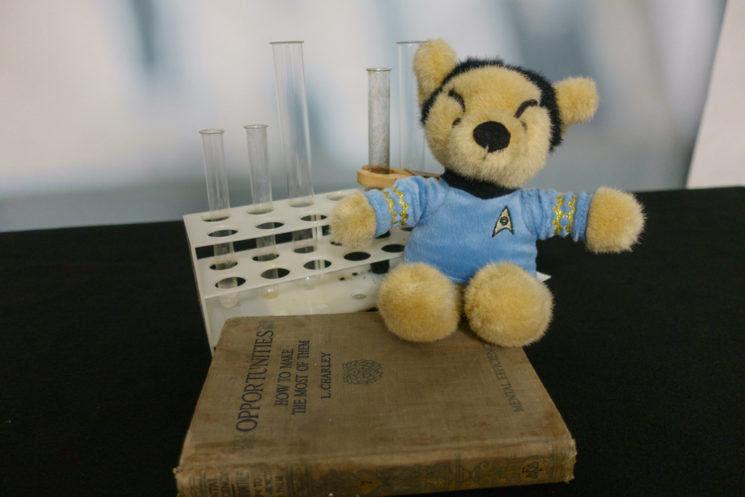 The effort to shoot this video was very high as the depth of field was limited to 1 / 10mm. So I focussed on a self-converted focusing slide, which was partly built from laboratory accessories. By HDMI cable, I have the image of the Canon 5D MK IV on a large display brought to better focus.

For this reason, I also used a lot of plates, because the plates were always offset by a few tenths of a millimeter after inserting and I did not want to readjust a lot, to keep the video as calm as possible – here’s a little taste of my consumption of plates. Somehow, even these scratched plates are a work of art in themselves. 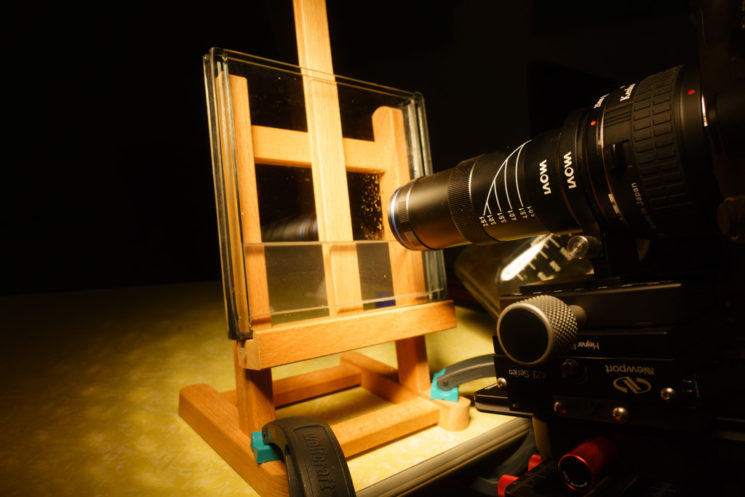 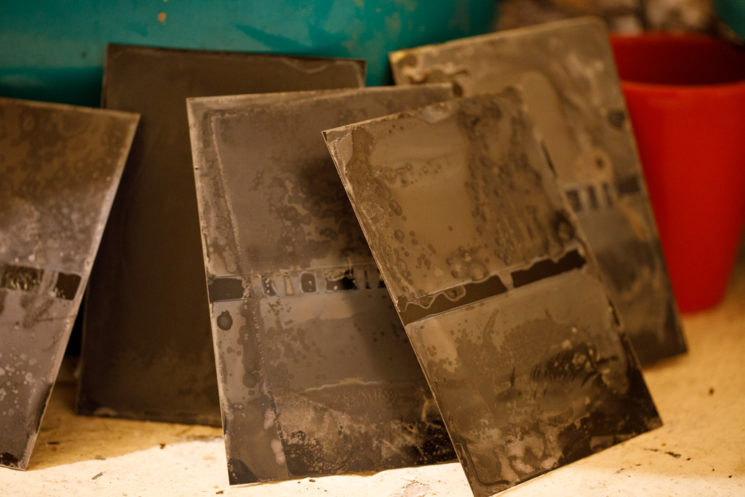 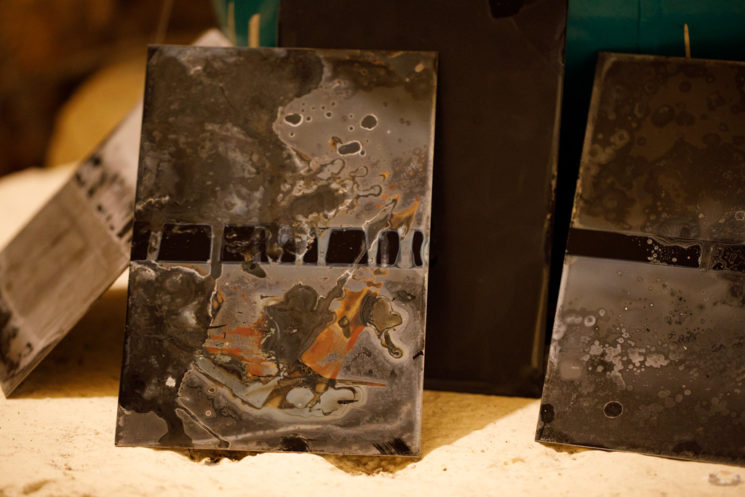 In addition to the depth of field, shaking was also a big problem. So if you see little movements in the video from time to time, Erich and I were standing. It is enough if a tile yields by 1 / 10mm. That’s why there’s little making-of material. Any movement carries the risk of vibration in the video.
Heat created by the lighting and heat produced small bubbles in the chemicals, so cleaning was more often called for. Short explanation of the process: 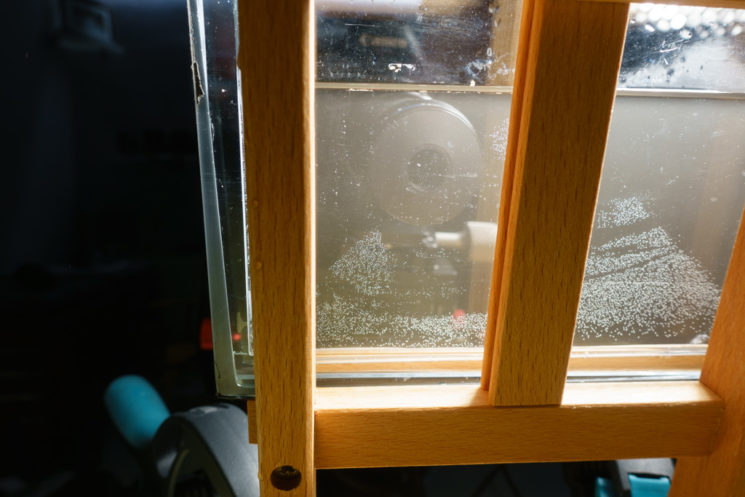 The process briefly explained again, I empty at the beginning a mixture of collodion, ether, alcohol and bromine salts (cadmium and ammonium) on the plate. After the plate has been immersed in the silver nitrate bath, silver salts become photosensitive from the bromine salts. Now the plate is placed under red light in the light-tight cassette. The cassette is then mounted to the camera and exposed. After exposure, the plate is doused with the developer. The contained iron sulphate adheres to the crystals which were charged with light during development. The development is stopped with water and then the plate is fixed. The fixer contains sodium thiosulfate, which dissolves the excess silver salts and gives rise to the image.

Here are a few more photos of the creation: 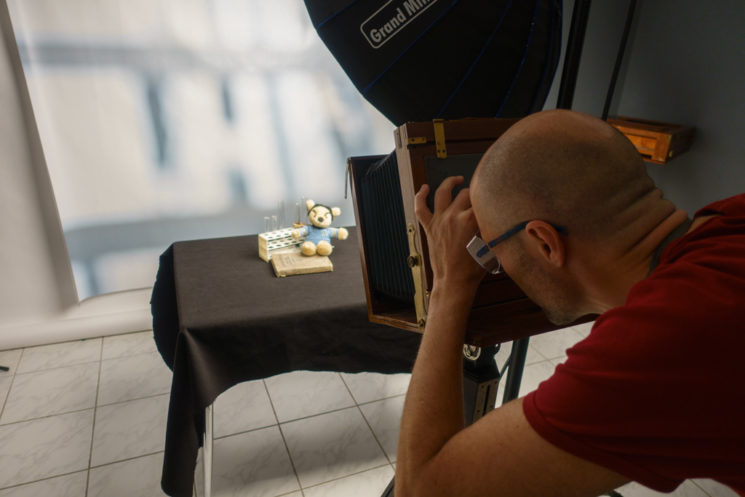 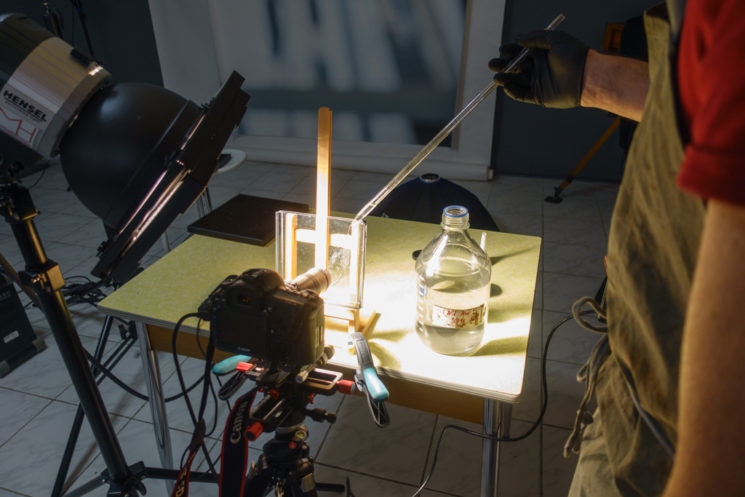 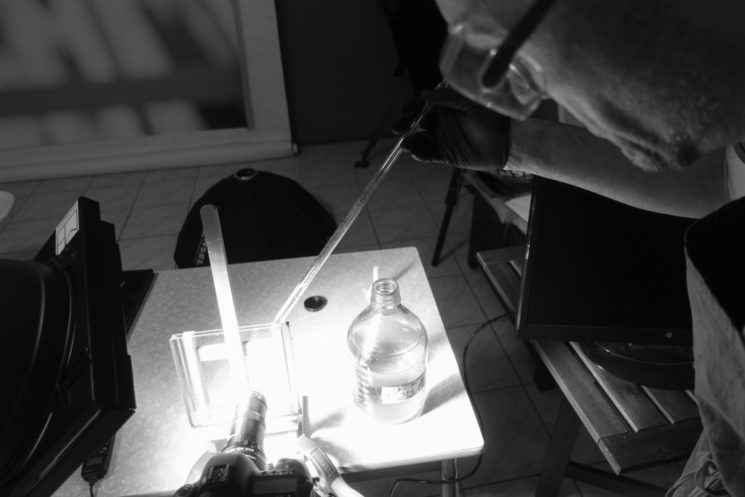 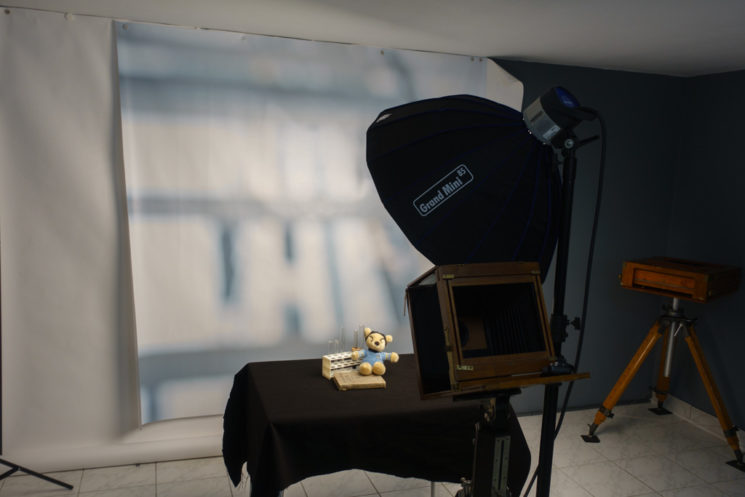 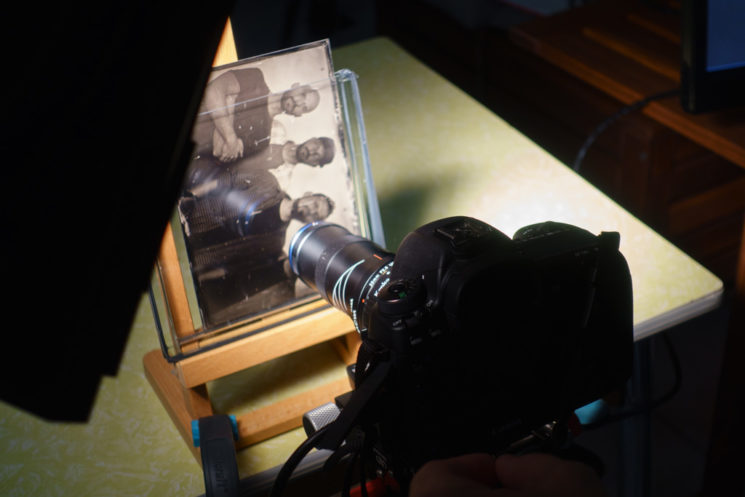 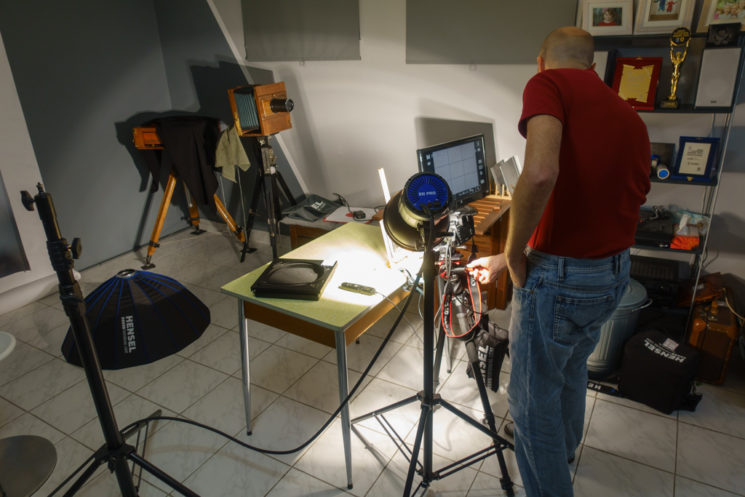 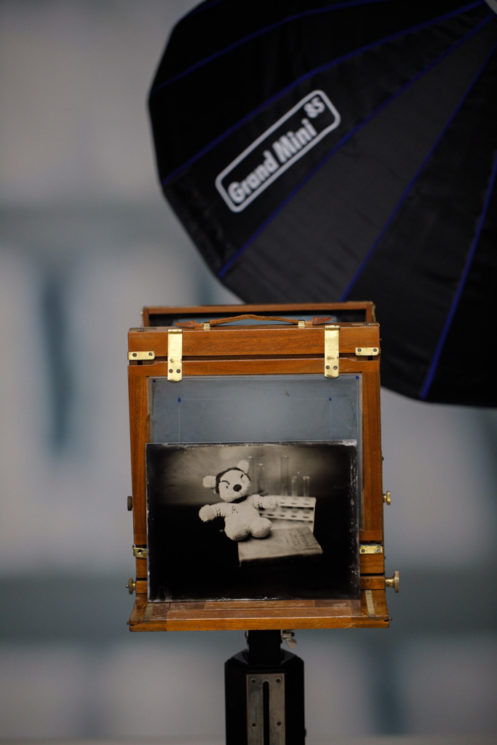 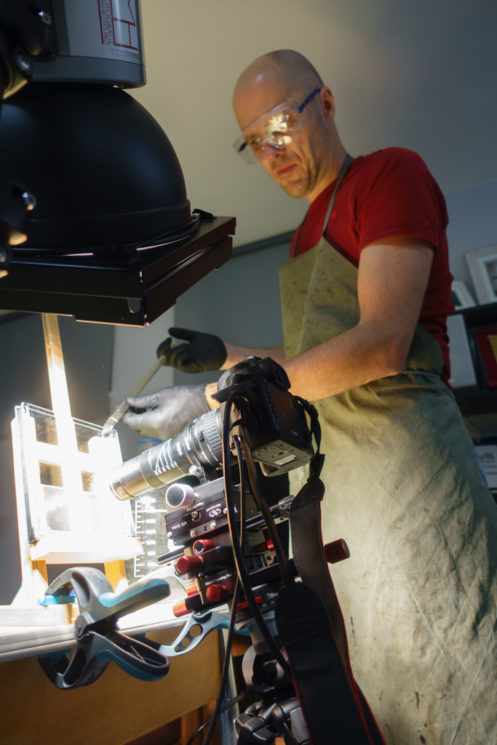 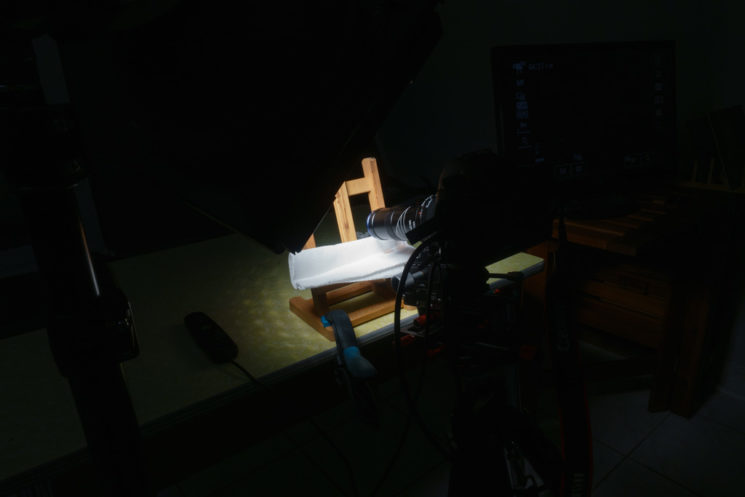 Markus Hofstätter is a professional portrait, events and sports photographer based in Austria. He has a passion for analogue and wet plate photography. He loves travelling to visit new places and meeting new people. You can find out more about him on his website or blog, follow his work on Instagram or Facebook or reach out to him through Twitter. This article was also published here, and shared with permission.

How to modify an 8×10 sheet film holder for shooting wet plate collodion
« Canon to use Sony sensor in upcoming interchangeable lens APS-C camera?
The RED Hydrogen One is “a $1,300 mess of a phone” »