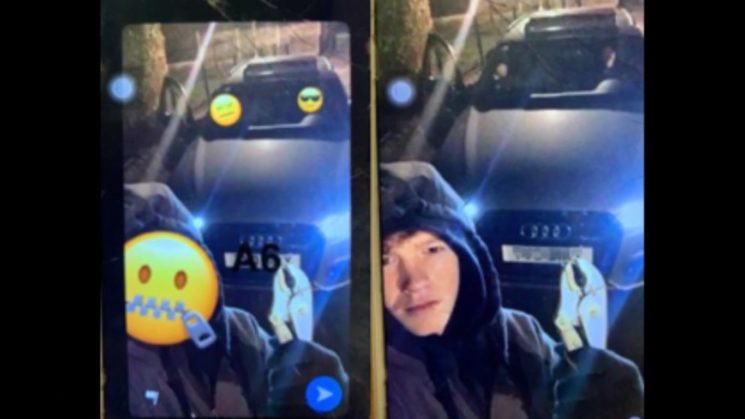 West Yorkshire Police recently arrested a gang in Leeds that stole luxury cars. The police reportedly found them thanks to Instagram, as they posted a selfie with a stolen car to brag about the theft. Furthermore, they even shared a video showing them driving around in the stolen car. Clever, right?

According to the police report, the gang of young men used a pseudonym “Mr. Dingers” on Instagram. Apparently, “dingers” is a British slang for stolen cars. On this account, they posted photos of the cars they’d stolen, bragging about their crimes anonymously. Or not so anonymously, as it turned out.

One of the gang members, Frankie Allwork, 21, posed in front of a stolen Audi A6 holding a pair of mole grip pliers. Two other guys are sitting in the car, and their faces are covered with emojis. However, the police report says that the guys also posted a video to their Instagram account. It shows the suspects driving along to music in the stolen car, again with a pair of mole grip pliers. The video dates back to 7 January this year, and it gained 33,000 views.

Still, it took a serious investigation to get to the suspects and put them behind bars. The officers investigated other car thefts in the same area, most of which happened between June and December last year. Eventually, DNA found on a cigarette but lead to Allwork, who was connected to multiple car thefts. The video he posted to Instagram was found on his phone, as well as messages about the crimes. The unedited image was also recovered from one of his compliances’ phone.

Along with Allwork, 20-year-old James Holroyd and Bryn Kerry, and 18-year-old Joel Cheetham were also connected to the crimes. All four guys were reportedly pleaded guilty to burglary and/or car theft charges in Leeds Crown Court. The police report reads that Allwork was jailed for four years and six months; Holroyd was sentenced to 34 months in prison; Kerry was jailed for 32 months, and Cheetham is due to be sentenced next month.

Gizmodo refers to an article by The Sun which warns about Instagram accounts of “crimefluencers.” Conservative MP Damian Collins told The Sun that “it’s appalling they will allow people to glorify criminal acts on Instagram and build an audience for people watching it.”

“They’ve got the capability to monitor what goes on even in closed groups on the platform and they should be closing these groups down. Content that depicts and glorifies criminal acts has no place on social media and these social media companies should be acting against it.”

The article was posted in February this year, but Instagram has changed its policy in the meantime, at least regarding self-harm and suicide-related content. Looks like photos of rifles and crime still easily go under the radar, but I’m hoping that will change, too. In the meantime, it’s good that some thieves are at least stupid and vain enough to brag about their crimes on Instagram and lead the police straight to them.

« Olympus denies rumors about shutting down its camera business. Again
Facebook fixes bug on iOS app that opened your iPhone’s camera in the background »