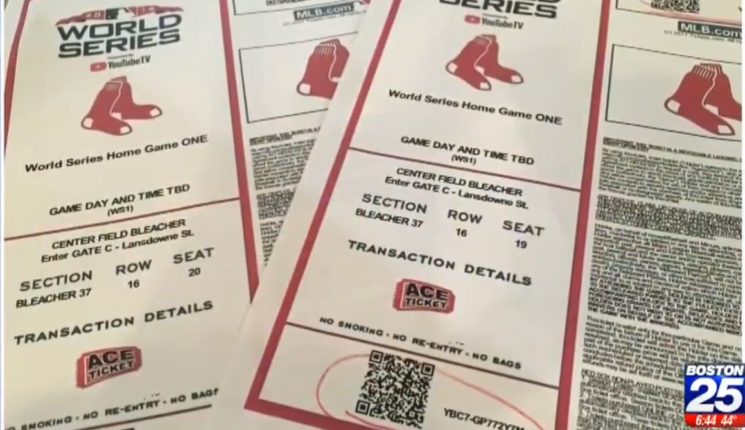 It’s not uncommon that Instagram photos end up being stolen and shared without credits. Some even got sold for big money (remember Richard Prince?). But, recently a Red Sox fan ended up having his $650 World Series ticket stolen – all because he posted it to Instagram.

28-year-old Robbie Johnson from Wellesley got a ticket for the World Series. And just like many people do, he took a snapshot and posted the photo to Instagram to share his excitement. But, he was far less excited when he arrived at Fenway Park and discovered that the ticket wouldn’t work. Johnson told Boston 25 News that this is when he went to ticket service, and they informed him that his ticket had already been scanned. I believe you can already guess how that happened, right?

When Johnson posted the photo to Instagram, he didn’t cover the unique ticket number and the barcode. Apparently, someone took an advantage of it and plagiarized the ticket. Reportedly, Johnson paid $450 for another ticket, so he got to the game after all. And he said that the person who had scanned his ticket never sat in the seat. But hey, at least he got his original seat.

April Martin of Ace Tickets told Boston 25 News that the ticket company recently began warning customers about this type of theft. She warns everyone to cover the ticket if they want to share it on Instagram, especially the barcode, and even their seating location.

I’d say that it’s plain common sense to hide the barcode and the unique number of the tickets you share on social media. But apparently, not everyone thinks so. Johnson has learned a very expensive lesson this way and has reportedly made his profile private after the scam. And in case you ever wish to share your excitement about an event – make sure to learn from Johnson’s mistake, so you don’t pay for the same ticket twice.