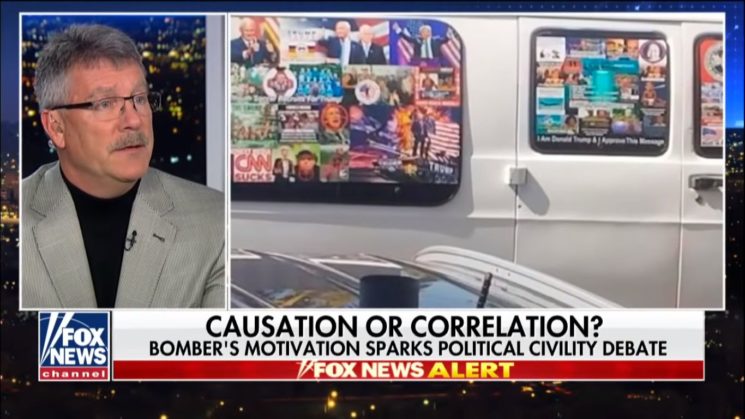 It’s not always easy to determine what falls under fair use of images. But if you ask for a permission to use a photo and get rejected, it’s pretty clear what you should (not) do, right? Still, sometimes people don’t realize that “no” means “no,” and they decide to use the photo after all. This is what Fox News did on 26 October when reporting about bombing suspect Cesar Sayoc.

Lesley Abravanel tweeted a photo from 1 November 2017 which shows a van that later turned out to belong to Sayoc. Abravanel husband took the photo and texted it to Abravanel, and apparently, Sayoc was delivering lunch to his office:

OMG. My husband just called and said "Remember that picture I texted you of that crazy Trump van that delivered lunch to my office? THAT WAS THE GUY!" This is the picture he sent me of the van parked at his office on November 1, 2017. #FloridaMan @FBI pic.twitter.com/18BimNzNhi

Shortly after Abravanel posted the photo, Fox News contacted her to ask if they could use it. She replied that the photo was taken by her husband and rejected, saying that Fox News weren’t “a reliable source of what’s going on in our country.”

Despite the rejection, the photo ended up on Fox News. Jared Loss notified Abravanel about it and she confirmed that she hadn’t given them permission to do it.

After learning that Fox News used her image after all, Abravanel turned to Michael Avenatti for legal advice.

@foxnews – you might want to stop using the picture. Where do you get your legal advice – Michael Cohen? Chuck “Never Went to Law School” Grassley?

I have worked in the media for a while, and I’m still not a copyright expert. There’s a lot to learn, there are many exceptions to the rules, and I have made my fair share of mistakes. It happens to everyone. But I don’t think it should happen to a large organization such as Fox News.

From what I know, news reporting falls under fair use as long as you give appropriate credits to the photographer. Still, it’s always clever to ask for permission just to be on the safe side. But if you do ask for permission and get rejected – then you simply shouldn’t use the image. So, I believe Fox is in the wrong here.

Abravanel told FStoppers that she hadn’t decided yet whether to take legal action against Fox News. She said that she still didn’t know where she stood “in terms of fair use of photos posted on Twitter.” As a layperson, I believe that she should file a lawsuit and that she could win it. What do you think?

He Said No, Fox News Used His Images Anyway