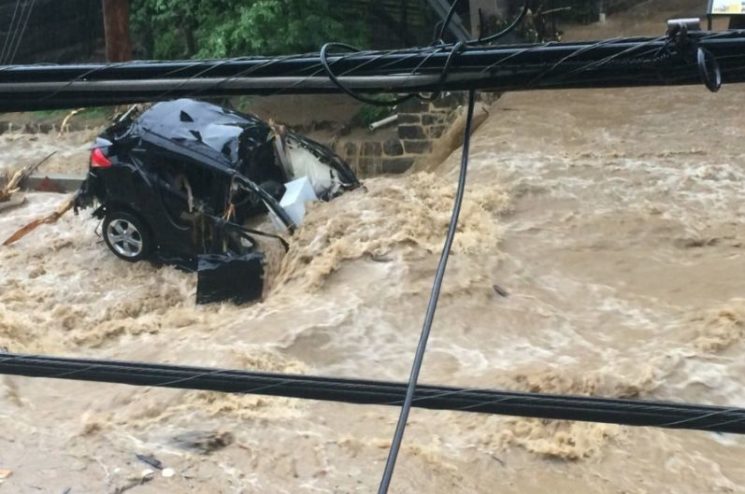 In the face of breaking news, smartphones have made everyone a frontline reporter, and social media has allowed users to become self-publishers. However, with a rare exceptions, most news content still relies on traditional media for mass distribution. Junior producers at large news gathering organizations often attempt to obtain licensing rights directly from individuals via social media for photo and video that might not be available through wire services like AP, Reuters and AFP. 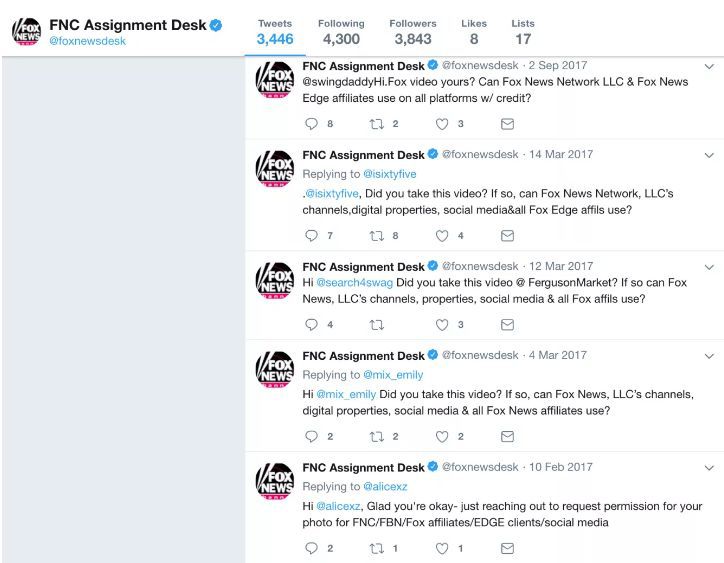 As previously reported, Max Robinson was trapped in the torrential flooding that swamped parts of Ellicott City, MD. His eyewitness photos, videos and accounts on Twitter quickly went viral and Robinson was soon inundated with media requests, including one from Fox News on May 27, 2018 at 5:23pm ET.

Robinson explicitly denied their request via tweet one minute later.

Then in a subsequent tweet, he granted permission to “Everyone but Fox News.”

Anyone but Fox News can use my photo or video

Does the tweet hold any legal weight? Attorney Leslie Burns says, “[W]ithout having seen the actual tweet, I think that one could argue that a tweet like that would be a license to anyone but Fox News. Licenses can be in writing, oral, or even implied.”

In the meantime, the AP contacted Robinson via Twitter to obtain distribution rights on his behalf. Lauren Easton, AP’s Director of Media Relations, told me that “AP reached out to Mr. Robinson via Twitter and he gave us explicit permission to use his content, both photos and video.” Unbeknownst to Robinson, Fox News subscribes to the AP Television News (APTN), a video news agency operated by the Associated Press.

At 9:06pm, Robinson’s video appeared in a montage on @FoxNews.

A Fox News spokesperson told PetaPixel via email that they used “APTN as the source for the images on all our coverage over the weekend – including the photo in question. We licensed the footage through AP’s licensing service, APTN, who made this material available to all their subscribers.”

A Fox News representative explained that it’s common in many newsrooms for multiple producers from multiple departments to simultaneously source first-person material for breaking news. One producer might have heeded Robinson’s request to not use the material, while another might have used the AP wire subscription a few hours later and found the video without knowing what had previously transpired. The representative couldn’t comment on the exact sequence of events in this particular case.

Max Robinson confirmed that he granted rights to the AP, but had “no idea that that allowed [Fox News] to obtain it.”

Many stock photography vendors have so-called “moral rights” clauses in their licensing terms that prohibit the use of an image to promote things like tobacco use, alcohol, pornography, etc without explicit consent. For editorial content, it’s common to see “MANDATORY CREDIT” call-outs in the metadata of news images along with restrictions regarding image size, duration of use and geographic distribution. The AP does allow contributors to place restrictions on content, but Easton said, “There were no restrictions on this occasion.”

Robinson subsequently requested removal of the content from AP’s network, and the AP has “withdrawn the video from customers and advised them they cannot use it.” Fox subsequently deleted the tweet with the montaged video.

The rapid unfolding of events has been discombobulating for Robinson. “This entire area of the law seems very vague and case by case. Especially when these usage questions are usually being pitched during high stress situations.” It’s unclear whether his tweet denying Fox News the right to use his video would be superseded by the ATPN subscriber agreement.

Robinson’s political persuasion undeniably influenced how he reacted to the events of the day. His hometown has been hit with two “1,000 year floods” in the past two years – a confluence of factors including topography, hydrology, and the town’s historic designation – and he remains unapologetic for taking a stand on the distribution and use of his photos and video. “Obviously what’s going on in my community is more important than Fox News using a video against my wishes but I hope this shows them that people are fed up with their dishonest behavior and tactics,” said Robinson. “I would feel personally responsible if footage I took was used in a segment to discredit climate change or attack my friends and neighbors, very real possibilities given Fox’s history as a network.”

As for any future legal actions, Robinson says, “Right now I’m focused on the recovery effort and helping as much as I can.”

He Said No, Fox News Used His Images Anyway

Fox News uses photo even after the owner rejects them