Camera gear talk is always quite interesting and often pretty amusing. So many are loyal to their brand, not that I’m pointing any fingers, and just can’t seem to look at things objectively. And while most brands these days have got things pretty good when it comes to stills, the sub-$5,000 camera market for video shooters is still a bit all over the place. Relatively speaking, though, it’s a pretty young sector of the market and everybody’s still trying to figure things out. One or two might have it almost right, though.

In this video, Caleb Pike looks at all of the manufacturers currently producing cameras for less than five grand to see how they really compare to each other, including everything from build quality to ergonomics and features to overheating issues and some 30-minute time limits in between. And while Caleb doesn’t really cite any specific camera models here, just the brands as a whole, it’s pretty interesting to hear his take. Even if it is still pretty subjective.

Included in Caleb’s comparison are Canon, Sony, Panasonic, Nikon, Blackmagic, Z-Cam, Fujifilm and Sigma (yes, they make cameras, too). And his initial assessment of the current situation of cameras as they stand for video shooters is pretty bleak. Ranking the brands from A to F, not a single brand made it into the “A” ranking. Of course, each brand has its perks, although some fall pretty short of the mark. Some of Caleb’s initial evaluations might seem a little harsh at first, but hear him out. 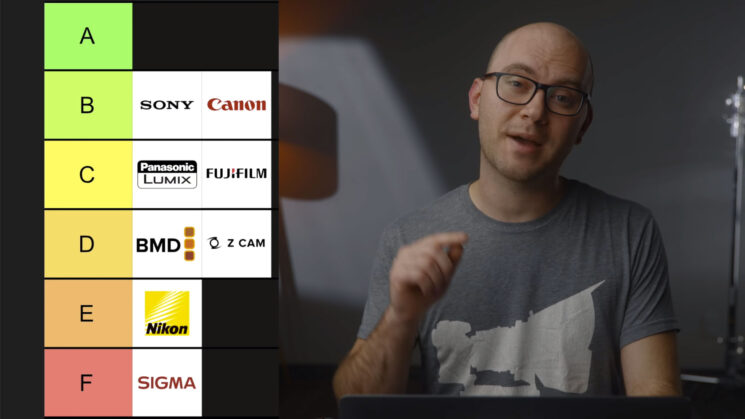 Bear in mind here, we’re talking about the sub $5,000 cameras. So, no, the new Nikon Z9 doesn’t count. Nor do the Blackmagic URSAs. And while I don’t necessarily agree on all of his wants and needs from a personal standpoint, I do largely agree with what he’s saying, objectively, looking at the market as a whole. Autofocus, for example, is a big sticking point with a number of the companies Caleb mentions (particularly Panasonic and Blackmagic), but for me it’s a non-issue because I’m almost always using either adapted, manual focus or cine lenses for video. But for others, it’s a priority.

Caleb does talk about how each of these brands can improve. How they can all get to that coveted “A” ranking, and while the suggestions might seem quite simple, manufacturers might find them not so easy to implement. Except perhaps Nikon. For them, it is easy. Just release a camera, any camera, that’s targeted towards video shooters. They (and Sigma and Fujifilm) aren’t competing against their own lines of video cameras like Sony and Canon are, so they could hypothetically put anything they want in there without cannibalizing their own sales. But for real, Nikon, any camera that’s specifically tailored towards video shooters would be a step up from what we’ve got not.

Do you agree with Caleb’s assessment? What do you think these companies need to fix?

Want to shoot 3D photos and video with your phone for $35? Well, soon you can… maybe