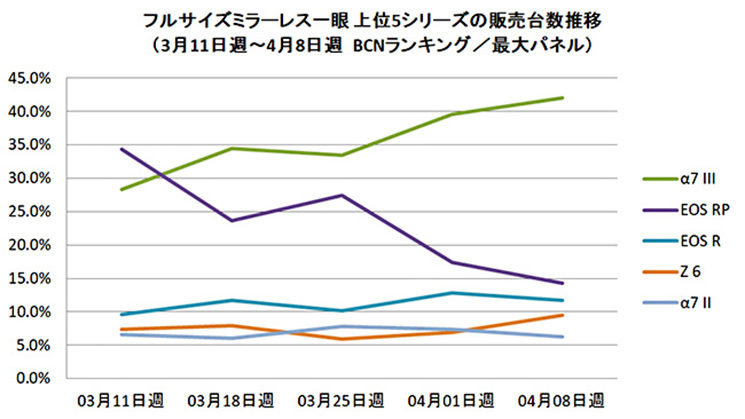 The latest data from BCN retail shows some interesting results of how the mirrorless market is looking lately in Japan. The image above shows sales volume for the top 5 selling full-frame mirrorless cameras in Japan through March and early April, with the Sony A7III growing in popularity against its suffering competition. The Canon EOS R, Canon EOS RP, Nikon Z6, and the A7III’s older sibling, the Sony A7II.

The EOS RP launched in March and had a very early lead in sales. But it rapidly dropped, allowing the year-old Sony A7III to take the top spot. By the end of the period, the A7III was selling more units than the EOS RP, EOS R, Z6 and A7II combined. And during the period as a whole, the A7III did indeed sell more units than all of the others combined.

BCN attributes the increase in A7III sales over the others as primarily being down to lens choice. There are still very few native RF or Z mount lenses for the Canon and Nikon bodies. While both brands now supply EF to RF or F to Z mount adapters, they believe people prefer to go native.

And despite the price difference, the A7III holds enough of an advantage over the A7II to justify the extra cost.

Canon plans to take more than a 50% share of the interchangeable lens camera market by 2020, although it seems unlikely in Japan. While Canon is still selling a decent amount of DSLRs, the move to mirrorless is all but inevitable now, and if Canon can’t keep up, they will struggle.

Sony, too, is also in the process of strengthening their position to increase their market share, and it seems to be working.

Nobody’s quite sure what Nikon is doing, although perhaps they’ll start to see some uptake when the new Z6 & Z7 firmwares are finally released.