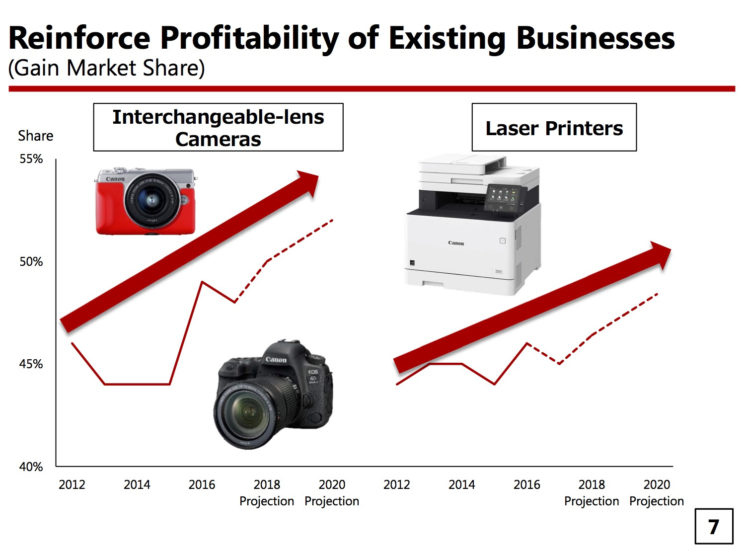 “We will go on the offensive” says Fujio Mitarai, Canon CEO, confirming that Canon are finally taking mirrorless seriously. The focus toward was confirmed by a manager recently, but it really only spoke about the entry-level. Now it looks like Canon is tackling the entire mirrorless market head-on if the slides and speech summary from Canon’s Corporate Strategy Conference anything to go by.

The speech summary talks about IoT and AI, and how Canon cannot be complacent and must continue to “evolve and always innovate“. They plan to increase automation to improve the production pipeline to keep up with demand and to reduce costs. More in-house production will also help to further decrease those costs. 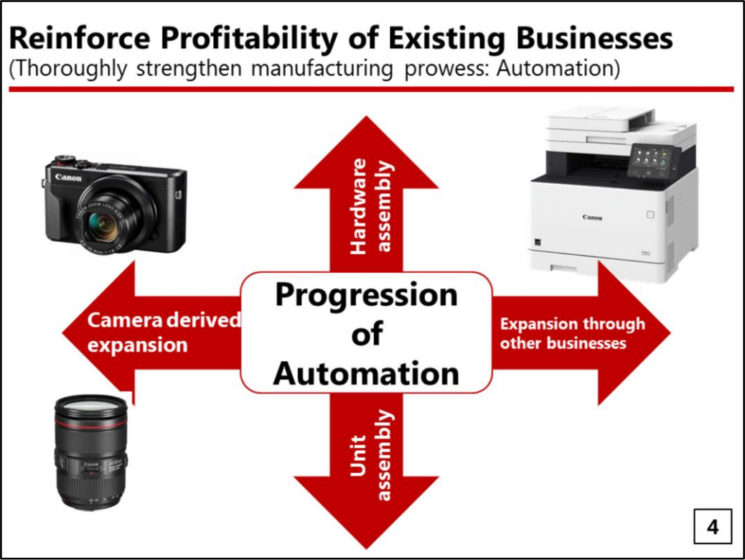 What’s particularly interesting, though, are their goals for interchangeable lens camera market share, which they expect to hit 50% by the end of this year.

Within existing businesses, there are market areas that are growing, such as color devices in MFDs and laser printers, and mirrorless in cameras. In these segments, by launching differentiated products that only we can provide, we will stimulate the market, grow our sales, and secure additional market share.

For example, in our core camera business, in addition to our overwhelming share of the DSLR market, we will go on the offensive and work to expand our sales in the mirrorless camera market, which is exhibiting remarkable growth.

This will allow us to reach our goal of 50% market share of the entire interchangeable-lens camera market.

So, basically, Canon wants back its share of the pie that Sony has taken. And it wants to try to keep as few people defecting as possible since the announcement of the new Sony A7III.

This is a great thing. Yes, Sony has led the way with mirrorless, and many have felt like Canon have become lazy. Nikon, too. But canon, at least, seem to be waking up to the idea that they need to get their act together and give people what they want. And if Sony sales are anything to go by, they want mirrorless. And if Canon are going at it full steam ahead, that will put pressure on Sony to keep innovating at the same pace shown thus far.

Hopefully, Nikon will take notice and follow suit. We’ve not heard any new rumours about the full frame mirrorless mentioned a few months ago, but maybe they’ll make some kind of announcement soon. I feel they have to, or they will become the last of a dying breed.

« Shooting travel videos with a drone: here are some do’s and don’ts
Adobe announces Creative Cloud price increase in the USA, Canada and Mexico »