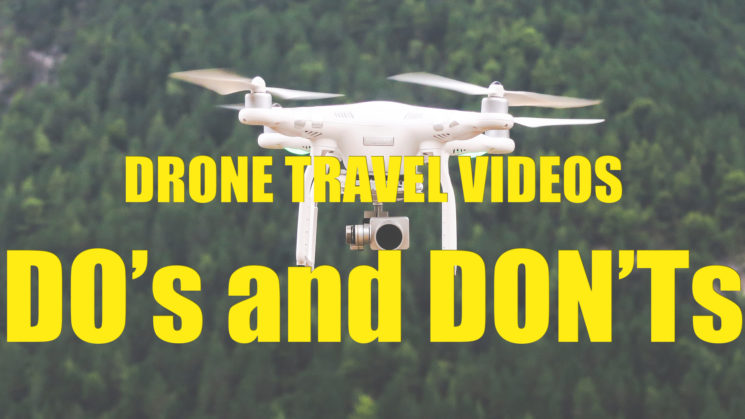 So, you want to take your drone to your travels and add a new perspective to your travel videos. It sounds like fun, but before you do it, you need to be prepared. Mark Wallace from Adorama TV has brought his DJI Mavic Pro to travels around the world and he’s learned a lot about shooting travel videos from the air. In this video, he shares his experience and the lessons he’s learned. They will not only help you get great drone shots on your travels, but also help you do it safely and legally.

Mark divides the “do’s and don’ts” into two categories: the first group refers to flying tips, and the second one helps you choose the additional gear to bring along. So, let’s get started.

The first and the foremost, although Mark mentions it a bit later: do find a big open field when you fly the drone for the first time. Even if you have used a flight simulator before (or have at least played video games), take some time to practice first.

Do hold your shots for longer than you might think. When you find the place you like, set the drone to the position you want and get a slow, consistent shot. It will give you more of the usable footage for the final video.

Don’t annoy the locals and the tourists. If you want to fly your drone above a beach or a city, make sure that people (and the laws) are okay with that. Don’t fly too low, but keep the drone high enough (around 100 feet) so it’s not clearly visible and noisy.

Do check the laws before you fly your drone. For example, a lot of world heritage sites or national parks don’t allow the use of drones. Flying a drone in some capital cities might even send you to jail if you film some government objects. So, do your homework before you travel and before your drone takes the flight.

Do pay attention to the gusty wind warnings on your drone. A strong wind might blow your drone out of the sky, and it’s a very expensive mistake.

Don’t fly a drone out of your hotel window. If you crash the drone while trying to get it through the window (and it is very likely to happen), it will crash onto the sidewalk and might hurt someone.

The second part of the video is dedicated to the extra gear you should bring along if you want to shoot videos with the drone. Mark suggests you buy a Fly More package because regardless of the drone you use, you’ll need extra batteries.

In the package, you’ll get the charger that lets you charge up to four batteries at once, which is handy and saves you time. It also has a USB port, so you can also charge the remote, smartphone or tablet.

You’ll also need spare propellers. They get damaged easily, and if you only damage one of them, you can’t fly the drone. So, it’s important to have the replacement propellers at hand.

When traveling with the drone, you also need a good case or a bag. Remember to protect the gimbal before you put the drone in the case so it doesn’t get damaged.

The final piece of advice is not to take your drone case as carry-on luggage, at least not before you check with the airline if it’s allowed. In many cases, the drone needs to be in the checked luggage.

Hopefully, you’ve learned something new and useful from this video that will make your travel and drone shooting comfortable, safe and successful.

The dos and don’ts of landscape photography

The photographer’s dos and don’ts of working with models

How to remove people from travel videos and photos without editing