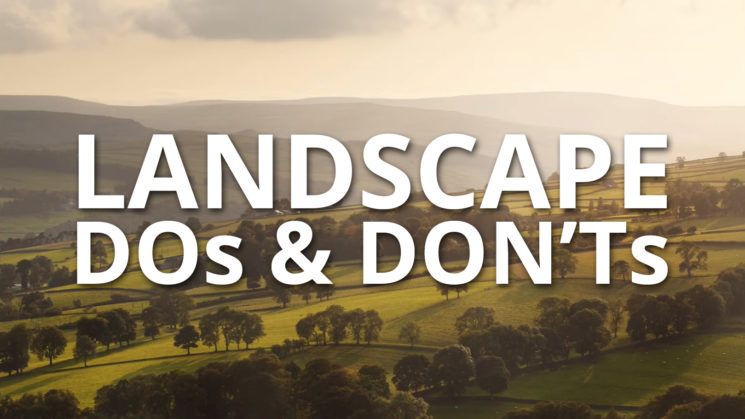 I find landscape photography to be a fun but challenging subject. I just often feel let down that the image just doesn’t do justice to the location. Part of the problem I think is that I don’t think a photograph ever can ever really compete with the experience of actually being there. Although, it may just be that I’m just not destined to be a landscape photographer.

Photographer Craig Roberts, on the other hand, likes shooting landscapes. And he’s rather good at it – certainly better than I’ll ever be. In this video, Craig goes through his “Dos” and “Don’ts” for landscape photography. And you may not agree with all of them, but that’s ok. Some of them boil down to personal preference.

Craig suggests just finding what’s local to you and trying to shoot it. It’s a lot cheaper and easier to make your local environment look good than to go off to some far flung corner of the world. If you don’t know what you’re doing, your photos won’t be great no matter where you go. But if you practise with your local area, you’ll be better armed for when you do go to more exotic locations.

As with just about every genre of photography, composition is king. It’s the one thing that can make or break an image, regardless of how good your exposure is or how the scene looks.

Not every landscape can handle an ultrawide view. Sometimes, you want to go longer and capture just a part of it in the distance. While I do prefer to go wide, one of my own favourite landscape shots was made at 200mm on a Nikon DX crop body.

Craig says that a good composition usually consists of a foreground, midground and background. You’re taking your viewer on a journey through the image. It also provides scale and context.

Most cameras are set to matrix or evaluative metering by default in order to figure out the best exposure for a scene. But cameras offer other modes, too, including centre weighted and spot metering modes. Experiment, learn how each reads your scene, and use them to give you what you want, not what your camera thinks you should have.

We all know that decreasing the size of your aperture increases depth of field. But you can get the most out of your lens by focusing in the right area. You don’t always need or want to focus to infinity, even if you have plenty of depth of field.

Focusing to infinity, even with tiny apertures, can leave foreground objects blurry. Focusing a third of the way in, though, can let you get both foreground and background objects razor sharp. To be sure, use your depth of field preview button or turn on liveview with the aperture locked to check that everything is as in focus as it should be.

Craig admits that this is more of a personal preference than a hard and fast rule. Craig actively avoids sunset and sunrise. In fact, he claims to have only ever shot three sunrise or sunset photographs. They just don’t appeal to him. He feels the sky actually distracts from the landscape itself. So, he prefers to shoot after the sun’s come up or just before it sets with it off to one side of the sky, or he’s shooting into it with the sun as a backlight.

I can’t say I completely agree with his feelings on sunsets and sunrises (especially sunrises, I love them when I can be up early enough), but I do like shooting landscapes during the day. Where I typically shoot, as I mentioned, is the Lake District. There’s all sorts of hills, mountains and whatnot, and when the sun hits them just right, with light grazing off almost parallel to their surface, I just find it beautiful. Whether photographing the landscape itself, or as a background for portraits, it’s what I like.

Polarisers and ND grad filters are a staple amongst landscape photographers. I have several of each myself. I tend not to use them too much with people in the landscape, as polarisers can do funny things with skin, and grads also affect flash and my foreground subject. But, I do dust them off each time I want to go and give landscapes a try.

Craig says that it’s rare he finds a landscape that doesn’t require one or the other. And while you can get around some of the issues in post, Craig’s a big believer in getting it right in the camera. It means more time out in the world shooting and less time sat at the computer.

I always keep a B+W 10 stop in my bag for landscapes, too.

Craig leaves us with a few extra ones.

That last one seems a bit counter-intuitive. But when it comes to shooting landscapes, especially once you get down to f/8 or f/11, they all start to pretty much look the same.

Do you agree with Craig? What are your Dos and Don’ts?

The photographer’s dos and don’ts of working with models

Up your landscape photography with these 5 hacks in 100 seconds