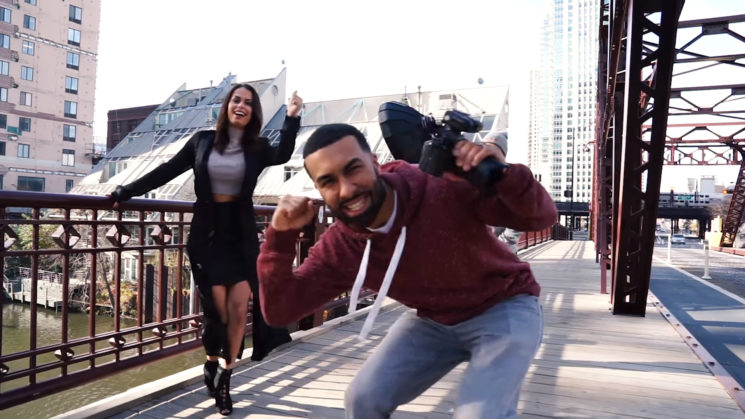 There are many rules in photography, but few of them are set in stone. When it comes to photographing people, though, there are a few rules that are simple common courtesy. As well as a few that are just a really good idea.

In this video from photographer Manny Ortiz, we learn 5 Dos and 5 Don’ts of working with models. The tips don’t just apply to actual models, though. Model in this context is really just any human subject. With the assistance of his wife Diana, we get to also hear things from the perspective of the person standing in front of the lens, too.

While not completely comprehensive, it’s a decent enough list covering common issues and questions that seem to regularly pop up.

Any negativity you show in front of your subject, even if it’s not aimed toward your subject will pass over. If you’re feeling down and negative about something, then so will they. If you’re not feeling the shot, or the light’s not giving you what you want, the subject doesn’t know this. They’ll assume they’re the cause of your negativity. So, be positive, keep them positive, and you’ll get great images.

2. Show them the good photos

This is often suggested, and hotly debated, by many photographers. Manny believes that showing the subject the great photos on the back of the camera will inspire and motivate them. My own experience tends to agree with this. When clients get excited by an image on the back of the camera, you can see that in the subsequent images. But it’s not something that all photographers do.

3. Play music that the model enjoys

I almost never play music on a shoot. I think this depends a lot on the type of shoot that you’re doing, though. Mostly, for me, I get what I want through conversation with my subject. But the principle is the same. Music, conversation, whatever puts your subject in the mindset that you want them to have. What gives them the expression and body language you want to come across in the photos.

Posts often tend to look stiff, even with experienced models. Because they’re trying to force themselves into the mould that you have made. Direct your subjects. Instead of having them pose mid-stride, have them walk from there to over there naturally. Tell them the feeling or emotion you’re trying to capture, and let them do it their own way.

5. Save posing/concept ideas to your phone

Put images that you’ve shot or like on your phone so that you and the model are both on the same page. The model can’t read your mind, so you need to show them. This isn’t to suggest that you simply copy somebody’s images, but to show then an image and say “this is the kind of feeling I want to create”, or “this kind of a look but better” can work wonders to inform your subject.

1. Don’t touch the model without permission

This one’s pretty much a no-brainer. Sometimes, there are times where, out of necessity, somebody other than the model will need to adjust something. Perhaps she’s in an awkward position that doesn’t allow her to free her hands. It might be some stray hair, or the way a dress hangs. But don’t just go up and start touching.

2. Don’t assume that the model can read your mind

We touched on this in Do #5. The model can’t read your mind. You need to communicate your vision. The look, style, feel and emotion of the shoot. If your model doesn’t know what you’re going for, they could turn up in completely the wrong outfit and makeup. And if they don’t know what you’re going for, they’re not going to be able to give it to you.

This might see like an obvious one, but given the number of times we hear about incidents on train tracks, perhaps not. But I do want to clarify something about this part of the video. Manny obviously values the safety of his subject, and informed consent is a big deal. Don’t just direct your model to do something risky. Ask the if they’re cool with it first.

The example used in the video is asking the model to shoot in the middle of the street. They say that if you ask them and they say yes, that they’re adults and they know the risks. The problem with this, though, is that legally this does not absolve you, the photographer, from responsibility. Photographers have a duty of care toward their subjects. Even if your subject understands the risks and agree, you’re still responsible for their safety while they’re under your direction and liable in the event of something happening.

So, bear that in mind. Don’t just go shoot some crazy risky idea, just because they agreed. Really think about the potential consequences, and if you’re prepared to handle what you’re asking of your subject. Your liability insurance (which you should still have when directing subjects in front of your camera, even if you’re not a professional) may depend on it.

5. Be careful with the terminology you use

This one, for me, largely depends on the context of the shoot. I think there’s also going to be some geographical and regional differences here in what’s acceptable and what’s not. Personality will also play a huge factor in what you can say to your subject.

But, when as a new photographer, or when you’re working with somebody you don’t know, always be polite. If you need them to stick their chest forward a little more, or lean their butt to the side, think of other ways you can make the request that aren’t so potentially personal.

What other Dos and Don’ts do you suggest for working with models or other portrait subjects?

The dos and don’ts of landscape photography

A beginner’s guide to working with models

Different Types Of Photographers As Seen Through The Eyes Of Models