For the second time in as many months somebody has tried to use my images to deceive models about their skill level in photography.

Because of this deception it’s certainly no giant leap to accuse these individuals of ill intent, especially if they are actively seeking out images of models in their underwear in their first messages of contact.

At the weekend I received a concerning email from somebody who follows my work. I have said that I will keep their name anonymous and they have kindly let me share the situation but I will change the models name in question to Sue for the purpose of this article.

It started when the model Sue was contacted by a lady on Facebook called Jess Nicholl who photographs under the name of Jess Nicholl & Michael Hunter Photography.

The conversation began as it usually does, but then Sue asked to see some pictures that Jess & Michael had previously taken. Jess sent some shots and that was when Sue first realised something was up. They’d sent pictures taken by me and Sue recognised them as such straight away. 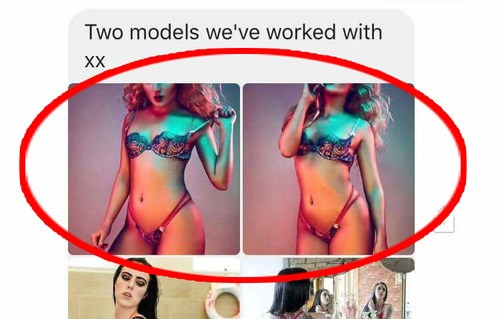 The above images were sent to Sue as images of models ‘we’ve worked with’. Although the wording is clever in that it doesn’t specifically state these images were directly taken by them Sue spotted the shots were not theirs and it was enough of a warning sign to prompt her to thankfully investigate further.

Jess then requested that the shoot details be finalised via email with her ‘partner’ Michael (I don’t know if this was a security risk on Facebook for them or wether moving to email was just a way to introduce ‘Michael’).  Once Sue had finalised a date via email, Michael then started to request images of Sue.

Then 11 minutes later Michael requested images of Sue in her underwear following it up with a statement that really made my skin crawl ‘or should I find another model?‘ A nasty little threat that insinuates that failing to send underwear pics could result in Sue loosing the shoot.

Below are the screen captures I have from the conversation between Sue, Jess and Michael. 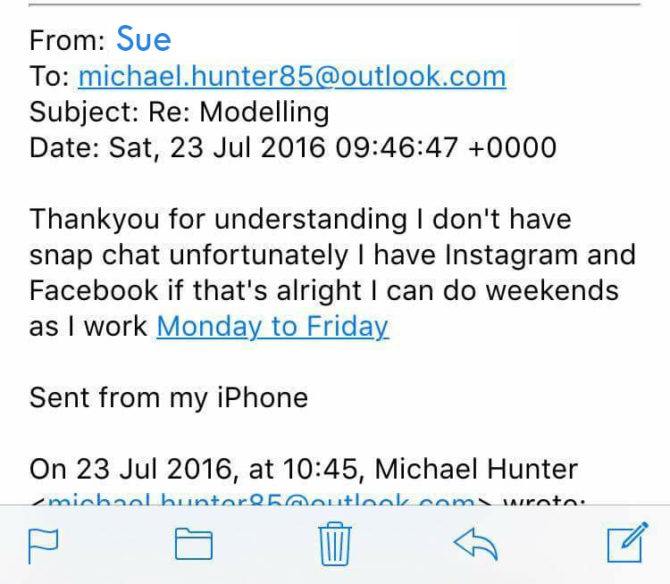 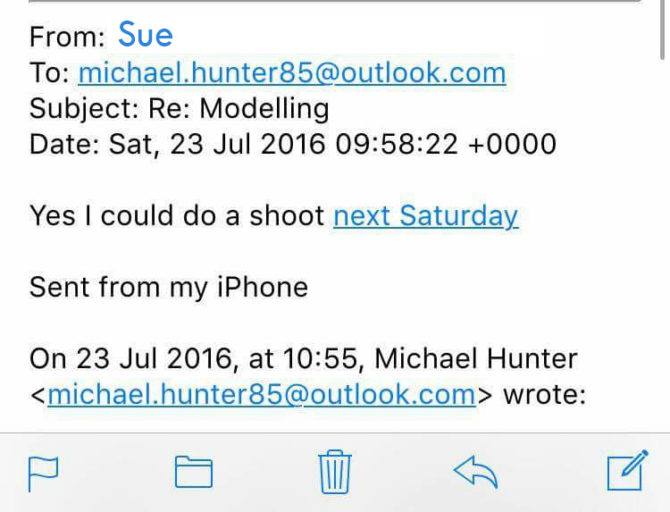 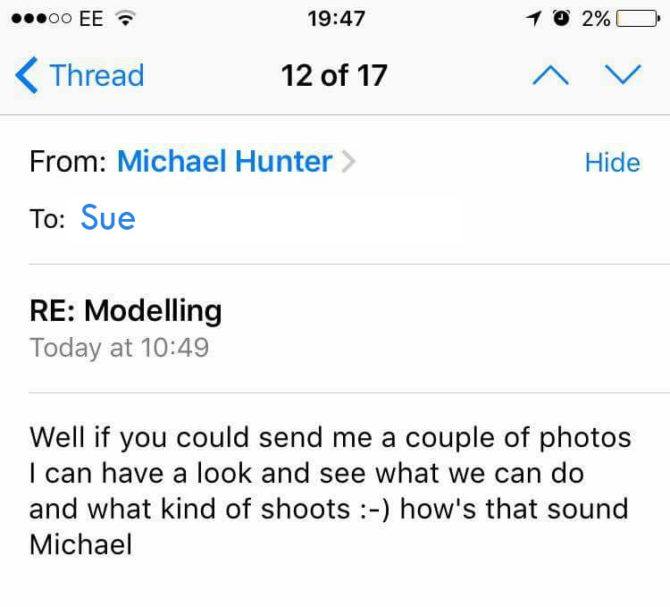 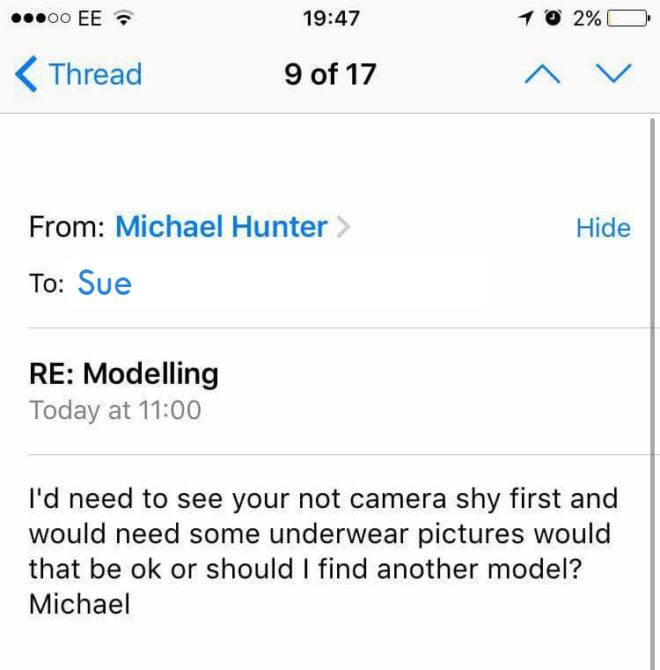 Now there are a couple of ways to look at this, firstly I’m sure there are photographers who would argue that if you were shooting a lingerie shoot that you’d require said underwear pics up front. Personally I don’t think that Michael went about this in anywhere near the right way and adding ‘or should I find another model?‘ is just a perfect example of how not to be professional.

Secondly I’m sure there are experienced models out there who are screaming ‘RED LIGHT’ at the absolute deluge of evidence to suggest that Jess & Michael are the very personification of dodgy.

Either way Sue, spotted the warning signs with the suspect images and Googled both of their names and found no reference anywhere to them shooting anything anywhere. As a result she confronted Michael about the stolen images and called him out as a fraud.

Neither Jess or Michael have yet to respond to Sue and she has either been blocked or all profiles and accounts have been deleted and taken down.

Whether you felt Jess (if Jess ever really existed) and Michael were real and just incredibly unprofessional and stupid it would seem that their response to being confronted could be perceived as proof enough of their guilt and ill intent.

We live in a digital age of photography and connectivity, rightly or wrongly it is now the norm for models to attend a photographers home for a photoshoot, I know I for one have photographed a lot of models in my home. But to others outside of our industry this seems like complete madness. A young lady attending a stange mans house alone?! Surely that is a recipe for disaster?! Well the good news is that 99% of the time it isn’t a disaster at all and that’s firstly because most people are inherently good and secondly with a little knowledge and experience any model can spot a fraud a mile away. 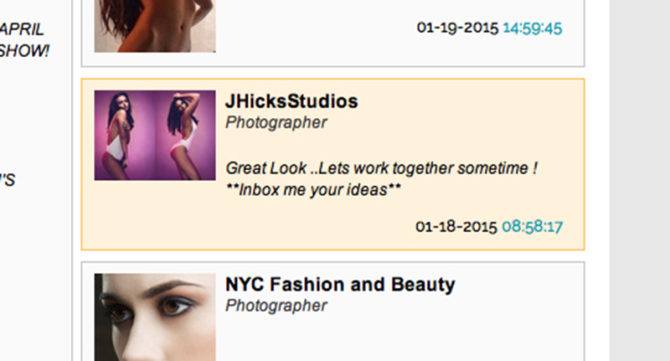 All models start somewhere and remember that at some point even the most experienced models had zero photos in their portfolio to begin with. So what are some of the things to look out for when starting out in modelling to give you the confidence to get some great first shoots under your belt?

Points that new models should bear in mind when organising their first shoots :

Simply Google the photographers name. If nothing comes up then this should be your first warning sign.

‘What type of lighting or setups will we be shooting?’, ‘what kind of styling are you looking for?’ and ‘what sort of makeup do you think will work best?’. If all you’re getting back is ‘whatever you think looks best just bring lots of lingerie’ then this photographer might require a bit more research.

3. Ask for examples and concept

Ask the photographer to send you example pictures of the ideas they’re looking to achieve. Remember when somebody says ‘I want to shoot boudoir’ images this could mean anything from suggestive well lit black and white shots or it could mean Playboy centrefold imagery. Make sure you’re both aware of what to expect from the shoot.

4. Meet in a public place

If you decide to arrange a shoot then you could also get them to meet you at a public place like collecting you from the train station or stay in your car until you’re happy they seem to be who they say they are. This is not ideal but it is something to consider if you have the option.

5. Ask about a chaperone

Reach out to other models who have worked with the photographer in the past. Message them directly, mention that you’re starting and get them to give you an honest and private opinion.

Use a model community site like Purple Port or Model Mayhem. They have a community of models that have worked with more well known photographers and you’re sure to find plenty of good ones that have a great track record.

The main reason I put this list together is because I know when you’re starting out as a model it’s tricky to get experienced photographers to work with you. As a result you end up working with less experienced photographers who don’t always have a strong reputation in the industry or a lot of testimonials.  Be smart like our model Sue and spot the frauds long before you organise anything.

Remember most of the photographers out there are just trying to get experience with photoshoots just like you are, they have no ill intent and most models go through a career without incident at all. These pointers are there to give you the best possible chance of a successful shoot and highlight some things to look out for when starting out.

If theres any more experienced models out there then please feel free to add any other pointers that you feel are relevant to new models. I’m not a model so I apologise if I’ve missed anything blazingly obvious. Also feel free to recommend any other modelling communities that you feel might be relevant to new models too and please feel free to share this with any model friends starting out and let me know your thoughts in the comments below. Many thanks indeed for reading.

Jake Hicks is an Editorial and Fashion photographer, an educator at Amersham Studios based in the UK, and the creator of the Jake Hicks Photography Gel Packs. You can see more of Jake’s work over on his webpage or training page, and interact with him over at Facebook, Instagram, 500px, Twitter and flickr. This article was also published here and shared with permission.

7 essential tips for safety on a filming set

Fuji re-issues warning over fake camera batteries and how to spot them
« Getty asks photographer to pay for her own photo, photographer responds with $1 billion lawsuit
Canon 5D Mark IV to come with a 30MP sensor? »