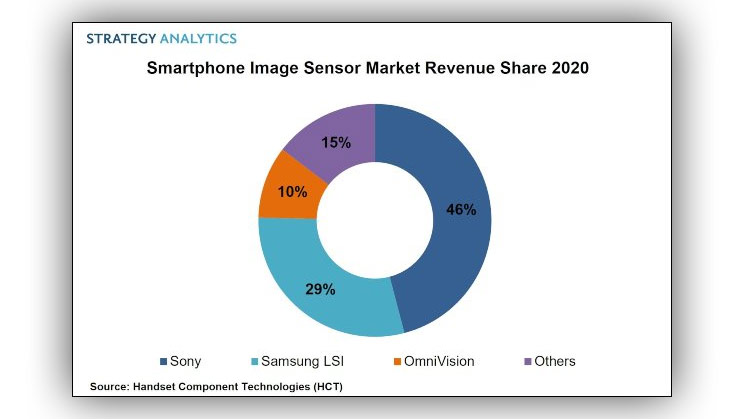 It’s probably not that much of a surprise, but Sony absolutely destroyed pretty much all their competition in 2020 when it came to the smartphone camera sensor market in 2020, with a 46% market revenue share, according to a report by Strategy Analytics. They say the global smartphone image sensor market recorded over $15 billion in revenue in 2020, up 13% year-on-year.

What’s perhaps equally as surprising as Sony’s huge 46% share is that 85% of the market was taken up by just three companies; Sony, Samsung at 29% and OmniVision at 10%. That remaining 15% is the entire rest of smartphone image sensor manufacturers worldwide. But according to the report, Sony’s share appears to be shrinking.

They say that “the pandemic did little to dent the image sensor market growth as CIS vendors observed strong demand from smartphone OEMs who aggressively adopted high-resolution sensors and higher sensor count across smartphone tiers in 2020”. Essentially, the number of cameras found inside modern smartphones is on the increase, as is the resolution of those cameras. Stocks of older chips just can’t keep up with the requirements of today’s tech demands.

Sony is losing some of that market share, though, Strategy Analytics says, to Samsung, OmniVision and SK Hynix, due to the sanctions placed on smartphone manufacturer Huawei. They expect that Sony will face more challenges and lose more business if trends continue the way they have been.

Between the competition and the semiconductor shortages, Sony has a battle on its hands. Of course, the latter affects all electronics manufacturers – which is why AMD and NVIDIA are having such a hard time right now.

For those of us outside of China, where Sony and Samsung are pretty much the only two real players in the game, I don’t think there’ll be much of an effect insofar as who makes the camera sensors in our pockets. But we might start to see slower release cycles if the shortages keep up. If we do, then maybe we’ll see some bigger leaps in tech as the duration between releases increases.