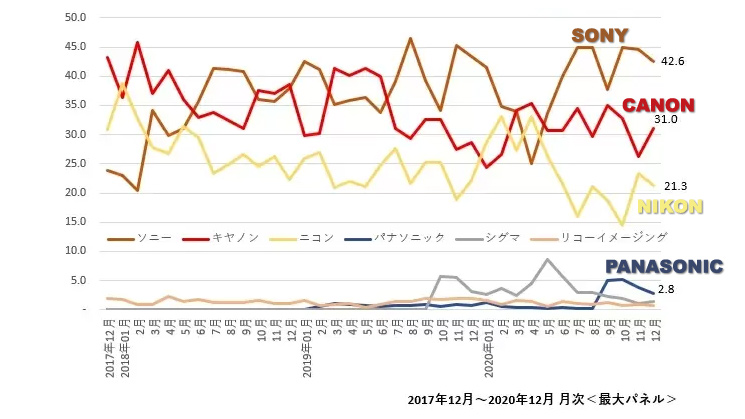 Despite the new models from Canon and Nikon over the last few months, Sony’s release of the A7C, A7S III and now the A1 have seen Sony take a massive lead in market share amongst full-frame mirrorless cameras in Japan. In stark contrast to the mere 25% share they held in April 2020, below both Nikon and Canon, Sony now holds 42.6%.

This is according to BCNRanking, who collates camera sales data from across Japan. Their latest ranking shows Sony actually dipping slightly from a recent high of 45% a few months ago, with Canon and Nikon both lagging behind at 31% and 21.3% respectively. Panasonic, the only other company specifically named in the chart is way behind at 2.8%.

It’s likely that the line which sharply rose in September 2019 and currently sits in second-to-last place, somewhere between 1-2% is Sigma, thanks for the Sigma FP. That remaining line in bottom place at less than 1% I suspect is Leica. Although my Japanese is a little rusty (or, non-existent), so, if you know better (or can confirm my guesses), let me know down in the comments.

Although Sony has made some great gains over hte competition in the last 18 months, last year still saw an overall shift down in sales of cameras as a whole. And they say that the market has definitely seen a shift away from DSLRs towards mirrorless cameras – a range for which Sony has been expanding quite nicely of late.

While Japan is not the world, Japan is the place that all of the full-frame mirrorless camera manufacturers (besides Leica) call home. The camera trends there often tend to drive each company’s direction and set the tone for trends throughout the rest of the world. And judging from what I’ve been seeing on social media lately, that seems to be the case.