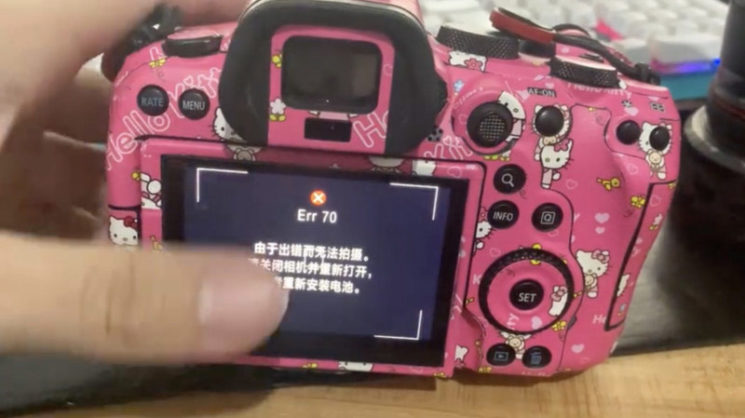 Canon released a bunch of new firmware updates last week for the Canon EOS R5, EOS R6 and EOS 1DX Mark III cameras. The EOS R6 v1.3.0 firmware update, was pulled within 24 hours of being published without any explanation or reason why. Well, it seems that the v1.3.0 firmware contained a not insignificant bug, which Canon was quick to fix. They have now released a new v.1.3.1 firmware.

A video posted to the Chinese social media site BiliBili illustrates the bug and exactly what causes it – using a rather fetching Helly Kitty themed EOS R6, resulting in “Err 70”. It appears that the issue is caused when shooting Full HD video in high-speed modes using EF-S lenses or cropped shooting mode.

While this is a situation that many EOS R6 users may not find themselves shooting in, it’s still probably a good idea to grab the new firmware update for the EOS R6 to prevent it from ever popping up. The v1.3.1 contains all of the features and updates of v1.3.0, but with this bug also fixed.

Although the v1.3.0 firmware wasn’t available to download for very long, if you did manage to get it and install it, you’ll definitely want to update your EOS R6 again with this one.