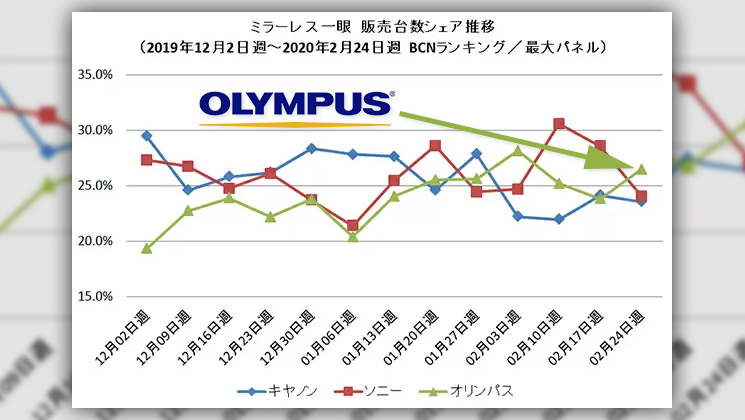 Well, this is interesting. According to the latest report from BCNRetail, Olympus has ousted Nikon, Canon, Sony and Fuji to top the sales in Japan for the month of February, thanks to pretty significant sales of the Olympus PEN E-PL9, taking 11.1% of the share and the OM-D E-M10 Mark III grabbing a further 5.2%.

The graph above shows mirrorless sales share in Japan by total number of units sold. Amongst the top ten camera spots, Sony claimed four of them, with Canon taking a further two, and Nikon & Fuji taking one each.

This is the second consecutive month that the Olympus PEN E-PL9 has topped the BCNRetail charts. The Canon EOS Kiss M (known to the rest of the world as the EOS M50) comes in at second place, followed by the Sony A6400 in third. The highest-ranking Nikon is the Z50 in sixth, while Fujifilm’s X-T100 just makes the list at number ten.