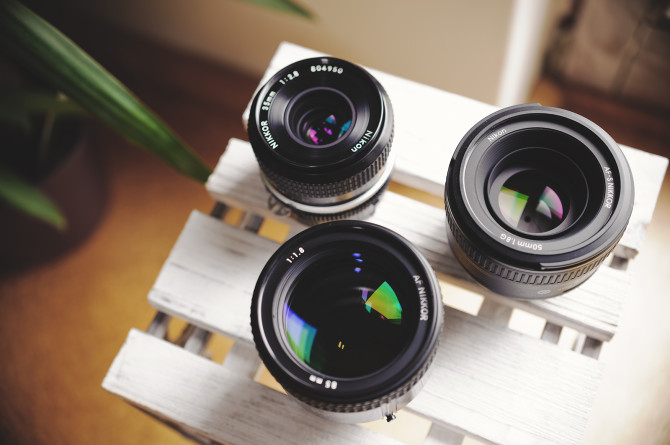 Winners are determined based on sales volume, calculated from data gathered from thousands of sellers throughout Japan.

Canon seems to be doing better than ever, while Nikon is just barely holding its ground.

Sony gets its first taste of victory (and a painful failure) and SanDisk maintains its top spot.

A bit of digging reveals why names like Think Tank, Lowepro and Manfrotto won’t make the list.

Canon and Nikon are the undisputable leaders with their duopoly reigning over 93.8% of the Japanese DSLR market. Ricoh (Pentax) comes in third with 4.5%, leaving Sony with less than a 2% market share.

Looking at the winners of previous years it become clear that while the duopoly remains strong, it is Canon that’s doing the heavy lifting. Controlling over half the market, Canon is up 5.5% from last year (best results since BCN started collecting info about DSLR cameras), while Nikon’s share plummeted by over 3%.

Sony was nowhere near making the top three, and seems light years away from the 7% market share it owned just two years ago.

I’m curious to see how Canon’s 5DS cameras, as well as the expected 5D Mark IV and Nikon’s new megapixel monster, will affect these number in the upcoming year.

You’ll notice that this info goes back only until 2012. That’s because up until then all interchangeable-lens cameras (DSLR and mirrorless) were grouped together.

This is a completely different ball game and while Sony has disappeared in the DSLR market, Olympus has been eating Sony’s dust this past year as Sony made its way to the crown.

Sony has been kicking butt with its Alpha 7 lineup (a7, a7 II, a7S and a7R) and it now has the numbers to back it up.

Sony’s success, together with Olympus’ disappointing performance, paved its way to the first place. It is Sony’s first time leading the Japanese mirrorless market, and the first time since 2011 that Olympus is not.

Considering the fact that CaNikon own the DSLR market it’s no surprise to see them take the first spots in this category as well, but it is by no means a knockout.

Nikon is at its lowest point in 6 years and Sigma took 3rd place once again. If Sigma’s ART lineup continues to expand, I won’t be surprised to see it get even closer to Nikon. We might even see Nikon down one spot, as we did when Tamron took the 2nd place in 2012.

Nobody is surprised to see Canon hold on to the top spot, with a market share just slightly smaller than that of both runners up combined, but notice tiny the gap is between Nikon and Casio.

Canon held onto the crown for a 10th consecutive year, and Casio almost made it back to what was once seen as its natural place in this category. What I find amazing is that not only did Canon almost double its market share compared to two years ago, but that it did so without affecting the 2nd and 3rd places. I don’t refer to Nikon and Casio specifically, as there has been very little fluctuation in the past ten years in the market share of 2nd and 3rd places no matter which companies help the spot.

SanDisk is quite possibly the most popular brand in the world when it comes to memory cards, so it seems quite natural to see it take the lead in Japan as well. Notice, however, that the difference between 1st and 3rd place is less than 5%. 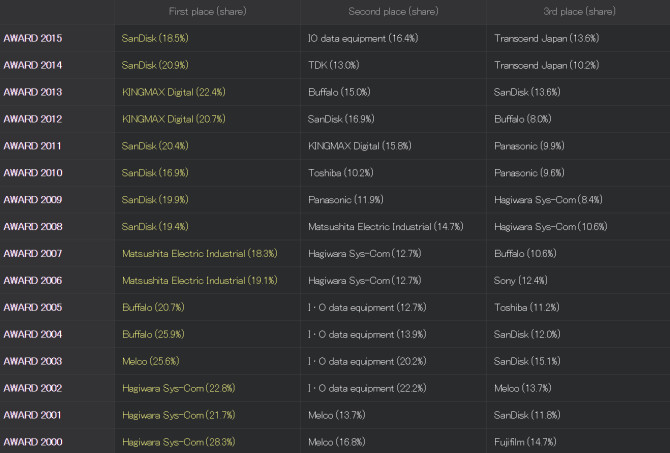 A quick look at the winners of yesteryears shows just how competitive this category is. Despite SanDisk winning six of the last eight awards, no company has come second twice in a row. In fact, every year since 2007 has seen a new runner up – that’s nine different runners up in nine years!

Also, the difference in market share between the top three is smaller than ever before. It’s a measly 5% today, compared to over 12% just three years ago.

No shockers as far as the top three brands (especially since WD bought Hitachi while Seagate acquired LaCie and Samsung’s HDD business), but I wasn’t expecting WD to be ahead by such a large margin.

This is the first year BCN has been gathering data regarding internal HDD’s so we’ve got nothing to compare it to. That being said, the recent discovery regarding the NSA hiding spyware in the top brand HDDs make me wonder if we will perhaps see a new name make this list next year.

The segmentation in this category is closer to what I’d expect to see in the internal HDD market.

Internal and external disks are often the same product in a different package. This is why I was surprised to see that WD, that so dominantly controls the previous (and closely related) category, has no presence in this one. 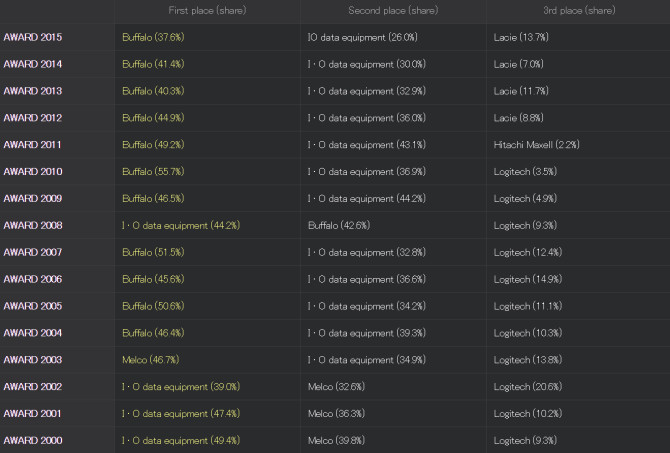 Looking back we see that other than a few rotations in the 3rd spot, this category has not seen many changes since 2000.

As I said, I do not know how come Western Digital is M.I.A. in this category. If happen to know why this is, please let me know in the comments.

Tripods and Camera Bags (or: Why You Won’t See Manfrotto and Think Tank in This List)

BCN does not differentiate between pro-grade gear and amateur gear in these categories. As far as its analysis goes, a $390 Think Tank International V2.0 carries the same weight as a bunch of the $6.75 camera bag that I found when I searched “cheap camera bag” in Amazon.

Same with tripods and monopods. Manfrotto’s $1,800 509HD video head and 536 carbon fiber legs have the same impact as whatever the first result is when you search for “cheapest tripod”.

This leads to a situation where high quality, professional grade products don’t have a chance of being ranked in the top 30, let alone the top 3.

Overall the statistics provided by BCN are rather insightful, but I would love to see the Tripod & Monopod and Camera Bags categories divided somehow into pro and amateur subcategories. Maybe even into DSLR equipment and equipment for smaller cameras. Anything would be better as the current information is almost useless.