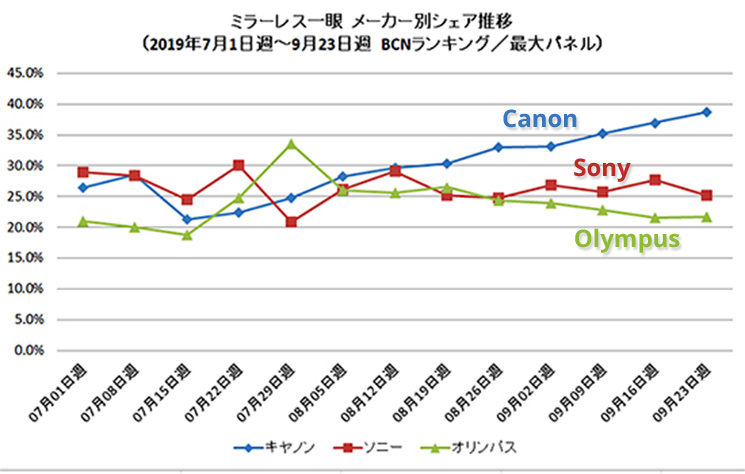 Even though Canon only makes two full-frame mirrorless bodies, they have been working on their EOS M APS-C mirrorless line up. And it seems to be paying off. According to the BCN ranking, which collections point of sale data at retailers throughout Japan, Canon is leading the way, at least for September.

Canon’s biggest seller in September was the “EOS Kiss M”. For the rest of the world, that’s the EOS M50. The new EOS M6 Mark II, released in September sits in 11th. Only two of Sony’s models, the A6400 and A7III ranked in the top 10.

According to the report, all three of the top manufacturers, Canon, Sony and Olympus, saw an increase in sales from the same month in 2018. Canon saw a 119.1% growth, Olympus at 119.2%, although Sony saw the biggest leap at 139.1% over the previous year. This was attributed to a buying frenzy before a consumption tax hike.

Despite pretty much all the major camera manufacturers being based in Japan, Canon always seems to do best in the Japanese market, regardless of what the rest of the world does. It will be interesting to see if this trend does play out elsewhere, though, given the expected number of bodies expected to be released over the next year or so.

« Skylum’s Luminar 4 is now out for preorders, coming to you in November
Seven tips to improve your documentary-style portrait photography »