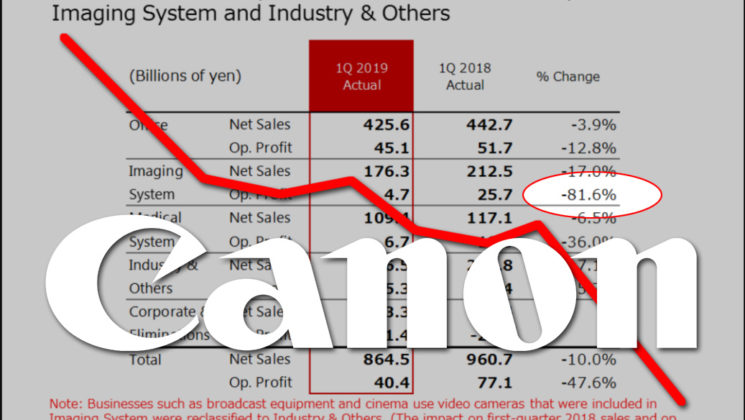 Canon has previously predicted a 50% drop in camera sales over the next two years, and it seems that they might be right according to their latest financial report from Q1 2019. According to the report, they’re already seeing a 23% decline in camera sales from last year, with an 81% drop in operating profit vs Q1 2018.

The report notes that unit sales are down much faster than expected, with entry-level DSLR sales falling rapidly along with an economic slowdown in China. Canon’s full-year prediction has been revised as a result. 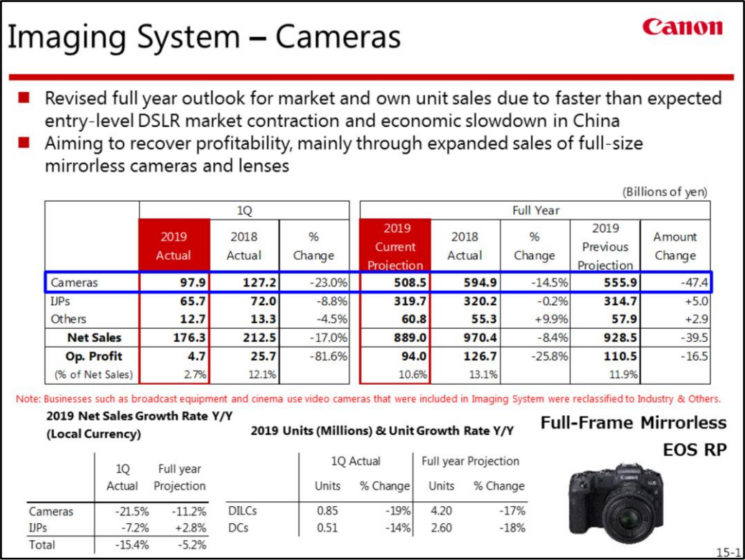 And while net sales in Canon’s Imaging division has only dropped 17% after taking into account items like Canon’s range of inkjet printers, this results in a more than 81% drop in operating profit for the department as a whole compared to Q1 2018. 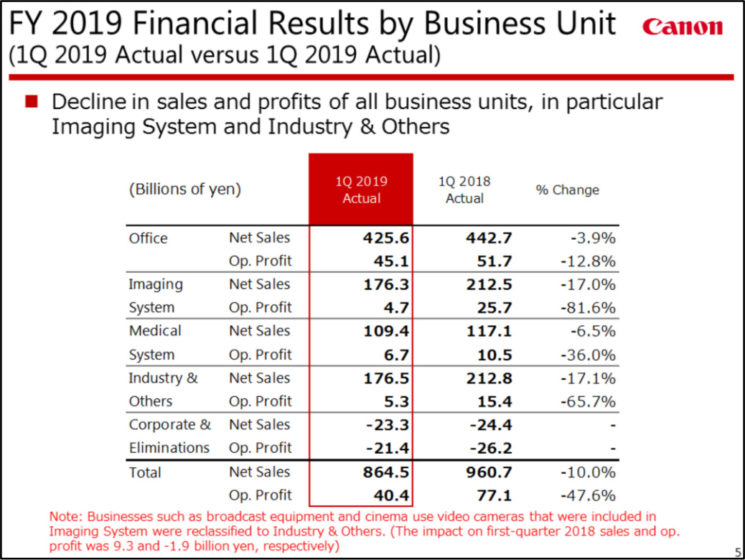 This drop in sales might hinder Canon’s goal of taking a 50% market share by 2020, although this will obviously depend on whether or not the other camera manufacturers are also seeing a significant drop in sales, even greater than Canon’s.

Canon expects the market to keep shrinking for another two to three years “due to the rise of the smartphones”. But it’s not only smartphones that are on the rise. With Fuji reporting 8.5 million Instax sales in just 9 months leading up to Q3 2018, this might be why Canon recently announced their own instant cameras.

They also see the benefits of mirrorless when it comes to their future sales, although they say that “sales of mirrorless cameras could not cover this drop”. More than likely due to the fact that many would-be-EOS R-owners are still put off by the specs of the current Canon mirrorless range. The 4K cropped video, the single SD card slot, and a number of other factors.

This will need to change in the future if Canon expects to attract more mirrorless customers to make up for the DSLR sales losses. Although Canon does say that their mirrorless unit sales grew “at a pace far exceeding the overall market”.

Mirrorless cameras, known for being small and lightweight, are increasing their presence in the market. Amid this situation, we will steadily shift our focus from DSLR to mirrorless cameras with the aim of maintaining our overwhelming competitiveness, which we have built upon DSLRs.

Canon didn’t go into any new products in the report, simply confirming what we already knew. That the EOS RP had recently been released, and that they’re planning six new RF mount lenses within the next year.

Additionally, at the end of the quarter, we further enhanced our lineup, with the launch of the EOS RP, a smaller and lighter mirrorless camera equipped with a full-frame sensor and the same new mount found on the EOS R. Additionally, we plan to release six new models of RF lenses within the year. Users have not only praised the performance of these bodies and lenses, but also expressed their high expectations for the R system overall having felt our sense of urgency in strengthening our lineup over a short period of time. We will work to maintain sales growth of the EOS RP, which got off to a flying start, while also successively launching new RF lenses as we work to further stimulate sales of our strengthened mirrorless lineup.

So, it seems like Canon is not worried, despite the substantial drop in sales and profit. They just need to shift their focus to what customers actually want.

You can read the full report over on the Canon website.