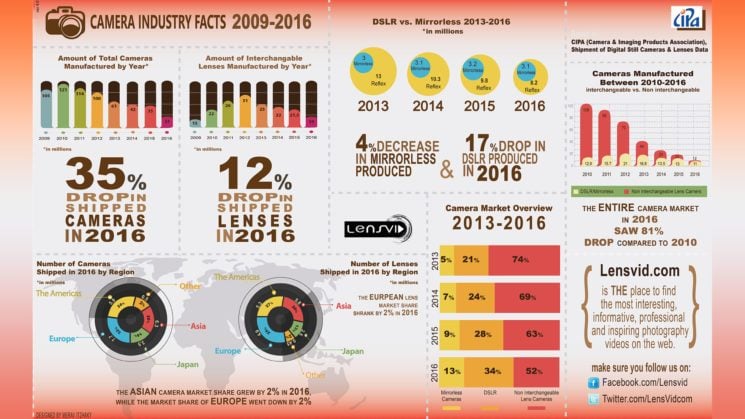 2016 wasn’t exactly the best year ever, and it appears it was also pretty bad for photography. LensVid has issued a report on the camera industry facts from 2009 to 2016. When you compare camera manufacturing, sales, and shipment, you will get pretty unexpected and drastic differences. 2016 seems to be the worst year for the entire camera market so far, with the total drop of whopping 81% when compared to 2010? So, what happened? What caused these enormous drops?

As you can see from the infographic, the amount of total cameras manufactured by year dropped from 121 million in 2010 to only 23 million in 2016. That’s a huge change, and the number of manufactured cameras was reduced more than five times in only 6 years.

The decline is found in other areas as well. Compared to 2015, in 2016 there was 35% drop in shipped cameras, which is pretty significant. There is also 12% decrease in shipped lenses. Between 2013 and 2016, there’s 4% decrease in mirrorless and 17% in DSLR cameras produced.

Between 2010 and 2016, a huge difference occurred between the production of DSLRs and mirrorless. The numbers dropped for both, but their ratio came to be completely different. Just compare these results: 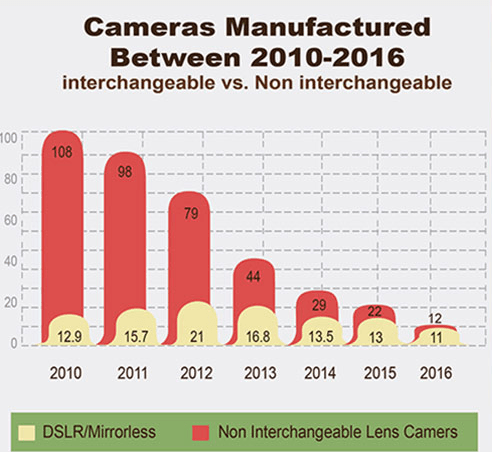 In 2010, there were 8 times more DSLRs than mirrorless. In 2016, the numbers dropped for both, but they almost got even: 12 million DSLRs and 11 million mirrorless cameras.

Why did all this happen?

There are several theories why there was such a significant drop in the entire camera market.

1.Smartphones killed the compact camera market – you’ve got to admit there are more and more smartphone photographers. Compared to 2015, there was a 5% increase in smartphone sales in 2016. And to be fair, phone cameras do get better and better. But we’ll get to this again later.

2. Mirrorless aren’t fulfilling their promise – as I’ve followed Nikon quite devotedly over the past couple of years, I still remember the fuss when their first mirrorless camera was released. According to LensVid, mirrorless manufacturers tend to make a lot of noise about these cameras, yet they stay stagnant.

3. The DSLR market is shrinking – this is quite obvious, but contrary from the common opinion, it’s not only because of the rise of the mirrorless. It’s probably the combination of reasons. Beginners rather choose to stick with their smartphone camera than buying a DSLR, which wasn’t the case only a few years back. As I mentioned earlier, the phone cameras keep getting better, and you can get a decent photo quality. And they are certainly going to improve even further. So, many people choose to keep on shooting on their smartphone instead of investing in a new camera.

4. Cameras are for older people – this is an interesting point of view. You can’t see it in the numbers, but look around you. Aside from professionals, a younger generation isn’t generally interested in cameras. They prefer using their smartphones for taking photos. This is not the case only when taking snapshots, but even at the point when they actually get interested in photography.

What does this mean for the future?

In the last report, Lensvid were too optimistic about the camera market and predicted that the market would grow in 2016. But after getting these results, they are more cautious with the predictions. So, their predictions for 2017 are:

1. The global camera market will drop below 20 million units.

2. Camera manufacturers will continue to cut jobs (and lose money).

3. We will see less innovation.

4. The focus will switch to professional segment and prices will increase. We even had a hint of this from Nikon’s plans for future, where they stated they will focus more on high-end cameras and lenses.Can all the existing camera manufacturers survive this change in the market? So far they’re holding up, despite the fact that the level of camera market is significantly smaller than at the beginning or middle of the decade. However, the last prediction is that some of the large camera manufacturers may disappear from the market by the end of the decade.

Numbers don’t lie, and we can see from the numbers that the camera industry didn’t give perform well in 2016. The fact is that the market changes constantly. Also, the notion of photography changes with the rise of new generations, social media, and improved smartphone cameras. If the trend goes on, there could be some significant changes in the market by the end of the decade. What I personally believe is that phone photography will continue to grow. And what are your predictions for the future of photography?

[What Happened to the Photography Industry in 2016? | LensVid]