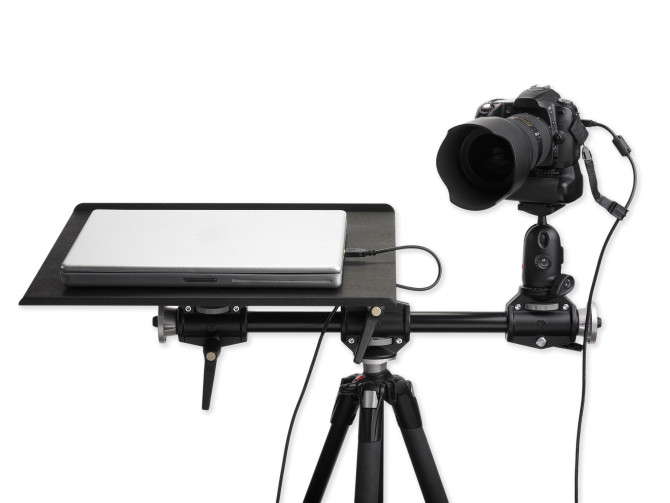 This article will take you through a journey to the perfect tethering solution. It is a curvy path, but the end is very fine tuned.

Before we even start, I would like to stress out three things:

So, you want to connect the camera to a computer and view the photos directly on a (hopefully calibrated) screen. This is called tethering or tethered shooting.

Fortunately, all (mid-level) cameras support tethered shooting and camera that do not support tethering are slowly vanishing from the market. This is true especially with the top dogs – Canon and Nikon – putting some effort into this and removing most glitches and problems with their newer models.

But why would you want to look at a computer in the first place?

Of course, the biggest advantage is the monitor. You can calibrate a computer screen much better than a camera LCD + it has significantly more space. This is why it’s easier to control (out of camera) sharpness and colors. And if you have more than one person on the set (models, photographer, make-up artist, customer) looking at the LCD quickly becomes tiring.

Photographer asks the model “Want to see again?”
Make-up artist: “Let me see something. I think the forehead is shining a bit, right?”
Customer: “A shiny forehead?!?!?! we cannot have this!!!! (grabs the camera)
Make-up artist to the customer: “ We have some powder. Let me put some on so we take a decent picture”
* click *
Customer leans to photographers: “Is it better now?”

The model is probably fell asleep by now…

It took us a while to refine our workflow but now we are pretty streamlined and have already tested it in several shoots. Our philosophy is that the photographer needs to have utter focus on the creative aspect of the shoot: focusing, composition, model direction. This is why the tethering application has 100% control over camera settings. Further, the application also automatically backs up everything, so even if a computer fails, we still have all the photos secured.

From our experience we noticed that:

First of all, we stopped and thought: What do we need, anyway?

Why this setup works for us?

This means that the photographer is distractions-free and does not fumble with camera settings at all. All his attention is directed at the model

The make-up artist can use the iPad at 100% zoom and see where the models has stray hairs, makeup is cracked, eye lashes are not perfectly glued and so on.

The lighting dude can tune the setup precisely and match the camera settings accordingly without harassing the photographer.

The customer can view the images on the iPad directly, pick out his highlights and direct the shooting immediately in a different direction, if necessary – even if he’s not in the studio while shooting.

Accompanying persons may participate in the action from a safe distance and also see what’s going on.

Here is how our setup works:

Not every camera fits for tethered shooting. The popular tethering fit, unfortunately, just the popular Olympus bridge cameras are totally out. But all the newer Canon, Nikon and Sony cameras are ideal for this kind of setup. We have previously worked with the Canon 5D series and the lower ended Canon 550D both of which worked great (with DSLR Assistant). After switching to Nikon we were first sweating pretty hard. This is because Nikon’s proprietary software is even worse than Canon’s. The D800 unfortunately produces massive data which is quite slow to transfer to the computer.  And we want our previews fast!

At Some Point we discovered CamRanger. CamRanger is a little battery powered wireless router that comes with its own special firmware and an iPad app. You can create a similar device with a TPlink 3040 and some open source software at about tenth of the price, but it’s not working quite as well as the original CamRanger. Not to mention the awesome user interface (see this link for installation instructions).

When we were using CamRanger, we found it best to shoot at “small JPG + RAW”. This way the images get to the computer fast while also having a full RAW file in place. This works, of course, until you accidentally press that button that moves quality to “small”. Yes, that happened to me. Once. And that was the last time I ever used the CamRanger until I need to put the camera into fire or access it remote …

But then we were back to using cables again. When we moved to the D800 we were faced with 40MB+ files. USB 3.0 moves those fast enough but we needed a nice long cable. We are using the bright orange USB 3.0 cable from TetherTools. Normally, the images take about 1 second to download. Here is my take on cables: There are many manufacturers and many brands, most are not as expensive as TetherTools, at the end though, they are the best option. They are not cheap and bright orange, but if you have a 5D Mark3 with a 2.8 70-200 you want that bright. You want everyone to see that cable and not trip over it. Come to think about it, compared to the camera and lens, it is not such a costly cable. That specific cable is 4.6 meters long and it is long enough for some spontaneous “around the model” movement.

There are many, MANY options for Tethering software. Almost all manufacturers have something out of the box. We have worked with Helicon Remote, DSLR Assistant, Lightroom, EOS Utility, and a few others. (there is a comparison chart here, albeit a bit old). After checking them all we stuck with Capture One – the possibilities, stability and compatibility of this software is enormous. Incidentally, Capture One is also the best RAW Converter on the market (so we think) and it even beats Adobe Camera Raw and Lightroom.

We talked to the ladies and gentlemen of C1 and have smooth but sent us a 10% coupon code. This is “AMBUDI”. Great! (Though the coupon name is a bit weird)

Capture One provides great tools, presets for export and is absolutely hammer proof: The color editor. This really can conjure up beautiful skin tones. We will certainly bring an extra post for C1.

Of course, Capture One also brings an image database, similar to Lightroom. Images can be marked and tagged. But unlike Lightroom, it all happens in private, physical folders. Those folders can be shifted to external hard drives or moved to other computers and be opened there. Easy.

The requirements form a tethering computer are very straight forward: USB3.0 port, more than 4GB of RAM and ideally an SSD drive. We always use a MacBook Pro for the job. It is beautiful; you can go and eat out after the shoot, throw the laptop in the backpack and pull it out at later at night to click through the pictures for culling. 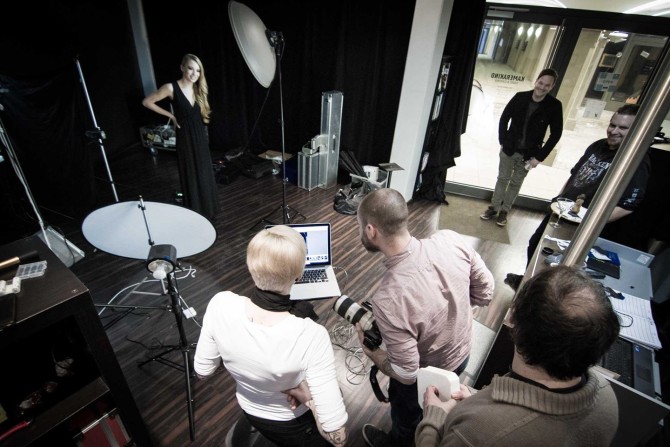 Capture One also has the option to open a viewer. The viewer can then be pushed to an external screen so you can also use a screen which is slightly bigger than the 15″ laptop monitor. Say a 60″ LG IPS panel TV. We opted for the LG because it has color calibration, and the mac has no problem to hold calibration for several screens. (not really sure about windows, but we will find out soon). If you are working with an LG please, PLEASE turn off all automatic settings from “living picture”, “Mega Contrast”, “Perfect Color”, “sharpening” and “Noise Reduction”. This can be a bit frustration because sometimes disabled is represented by 100, sometimes 50, sometimes 0, and sometimes something completely different. Just keep tweaking it until everything works.

Stay away from 4K displays, unless you really have some extra cash to spare. FullHD is good enough, especially if there are also other displays on set. 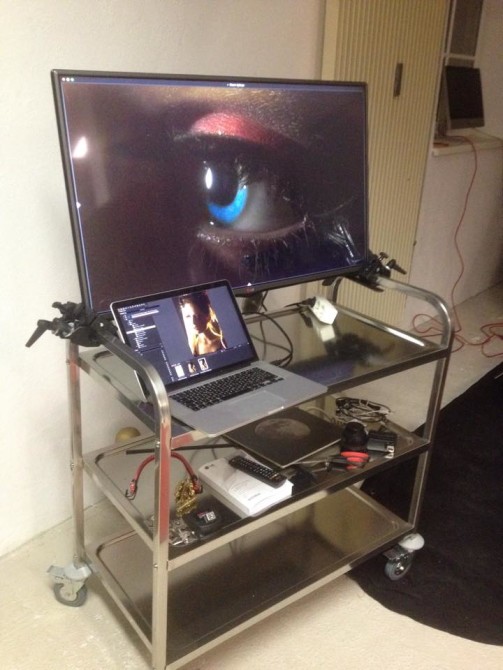 Another great discovery that we made is Capture Pilot. Capture Pilot is Capture One’s app for iPad, and they play beautifully together. One click starts the server on the application side, and a second later any new image is displayed on the iPad. So a client can browse through images and zoom in endlessly. (yes, even with the massive 36 megapixel monsters of the D800 you can zoom in to 100%). What’s even better, you can use the app to rate photos. The rating is then duplicated into other iPads and as well the main computer / (and giant screen). Everything syncs. Wow. We absolutely love this!

There is also a small, In-App purchase then trigger the camera and change most settings (aperture, speed, and ISO), though we would never give this power to a client. You can simply turn it off in Capture One. Brilliant.

All those iPads are running over WiFi. Since both the MacBook and the iPads support fast 5GHz WIFI, we got a 5GHz router. An advantage of this wavelength is that is still under-used so you are less likely to have other interfering networks. The transmission speed for us was faster by about 70% over the 2.4GHz network.

This is the last part of the article, but it is crucial, a good shoot will go horribly wrong if you lose all the photos. Trust me. In the Big Book of NAS, the first rule is that a NAS should only be used for NAS. And we use a Synology DS414 server as our NAS, and love it. (We do break the rules here, however, and we use our Synology station for many-many things, like VPN and such). In the Synology we have four 4TB disks installed and a RAID5 configuration for some redundancy. This While this is not the most fail-safe system, it provides 12TB of and has a good balance between price and safety.

The MacBook runs Hazel (a cool software that monitors folders and can apply automation on them) which automatically copies the files to the raid server for an Extra backup.

This all sounds pretty expensive, I guess, right? It does cost some money, but a) it has grown over the years and b) it is very versatile:

We’ve tested a lot over several years to get to this setup, and maybe a better title would have been: “our journey to perfect tether“, or “tethering market survey” but our last few months got the setup pretty tight and we don’t see anything changing…. for now.

Are you shooting tethered? please share your experience and tips with us in the comments.

« ‘Symmetry Breakfast’ Project Shows off Delicious Breakfasts a Man Makes for His Boyfriend
How To Build A Crazy 1000W, 90,000 Lumens LED Flashlight »