We are big fans of CamRanger, while other options have been around for a while (both DIY and pro) they came up with a well packed product for camera remote control that has all the features you can possibly think about. 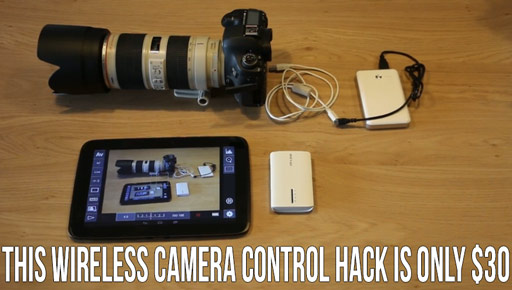 But if you are looking to spend a bit less money, don’t care about appearances and have the extra time to fiddle around, here is an Android driven alternative for $30. This hack from DSLR Film Noob is using an android tablet and a TP-LINK TL-MR3040 wireless router. It does require a bit of firmware hacking, but nothing that exceeds jailbreaking a phone or updating an Xbox.

You would also need a camera controller app for your android, you can use DSLR Controller for Canon and DslrDashboard for Nikon.

For the full instruction and extremely detailed step by step guide head over to DSLR Film Noob. They also have a little tutorial on how to use the tablet s a field monitor here.

Use GoPro parts to build the perfect monitor DSLR mount

« 7 Essential Accessories for Your First DSLR
The Lux Is A Beautiful Waist Level 120 Camera, You Can Build It Too »