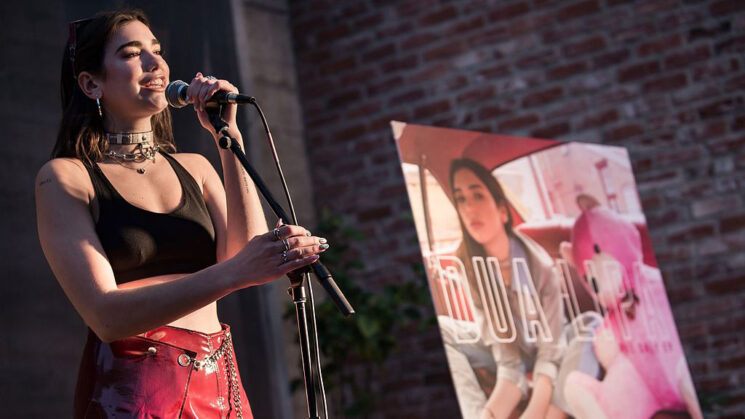 After so many cases of celebrities being sued for sharing photos without permission, you’d think at least some of them would learn a lesson. But I guess that’s not the case. After already ending up in court for sharing a photo of herself, singer Dua Lipa has done it again.

The British singer shared a photo on Instagram without licensing it or asking the photographer for permission. In return, the photographer filed a copyright infringement lawsuit. And while this is not the first time for Dua Lipa, this photographer also fought legal battles over the same issue before.

The photo was taken in New York City in 2018 by the local paparazzi photographer Robert Barbera. It reportedly shows Dua Lipa wearing a black sweater with the word “HEROES” in large capital letters, but it has been removed from her Instagram at the moment of writing this.

Barbera’s attorney Craig Sanders wrote in a complaint that Lipa “volitionally selected, copied, stored and displayed each of Plaintiff’s copyright protected Photographs” without “permission or authorization.” As Billboard reports, Barbera is seeking “actual damages and a disgorgement of all profits attributable to the infringing activity, an order enjoining Lipa from infringing any of his other works, costs of the suit and pre-judgment interest.”

As I already mentioned, both Dua Lipa and Robert Barbera were in similar situations before. Around this time last year, Integral images company sued the pop singer over exactly the same issue. However, the judge dismissed the lawsuit in October 2021 with prejudice, so perhaps that’s what gave Lipa the encouragement to make the same mistake again. We’ll see how the lawsuit will go this time.

When it comes to Barbera, he already sued another pop star for sharing his photos without permission. Twice! The first lawsuit was filed in 2019 and the second one in 2020. As a matter of fact, Barbera has a history of suing celebrities for posting his photos: Justin Bieber, Alexander Wang, Christian Siriano, and Versace are only some of them, according to The Fashion Law.

On the one hand, I rarely side with paparazzi for a number of reasons. But on the other hand, I side with the copyright law which claims that the copyright belongs to the person who took the photo (whether they’re a paparazzi or not). So no, photos of celebrities don’t belong to them, as Snoop Dogg, Gigi Hadid, and apparently, Dua Lipa might think. The copyright to belongs only to the photographer, so he has all the right to sue anyone who use them without buying them or asking for permission.

The experts from image theft protection agency Pixsy have commented on the case and included pointers for what to look out for to avoid copyright infringement:

Here, Pixsy sets out the following commentary about cases like these, and the debate between copyright law and the right to privacy. They have also included pointers for what to look out for to avoid copyright infringement:

“According to US copyright law, a photographer can sue a celebrity over stolen pictures, which they frequently do, as celebrities often post photos of themselves on their social media accounts without permission from the photographer.

Under US copyright law, a person who captures an image in a public setting is the legal owner of an image – not the photographer’s subject. Each finding of infringement can yield damages of $750 to $30,000, with compensation capped at $150,000 for an intentional violation.

On the other side of the coin is the issue of privacy. Famous cases of celebrities suing paparazzi for an invasion of privacy include George and Amal Clooney, Prince William and Kate Middleton, and Adele.

The conflict between the right to privacy and the right to freedom of expression is an ongoing one. In the US, many state bills, such as California’s anti-paparazzi law, aim to protect celebrity privacy, while the First Amendment of the US Constitution protects freedom of the press. Then there’s the matter of public interest to take into account, as privacy laws can exclude situations that may be of public interest, including matters involving celebrities. What constitutes public interest is a gray area, and one that celebrities often battle with.

It’s not just celebrities that can be sued or held accountable for copyright infringements. Members of the public can too.

If you’re wanting to use images from social media or a search engine, remember that the original photographer typically owns the copyright. Locating the copyright owner can be a bit of a minefield; using an image checker will help you verify the source and correctly attribute the image you want to use, but make sure to get familiar with photo copyright laws first.

If you need help finding an image source, check out our guide on verifying images and sourcing the copyright owner.”