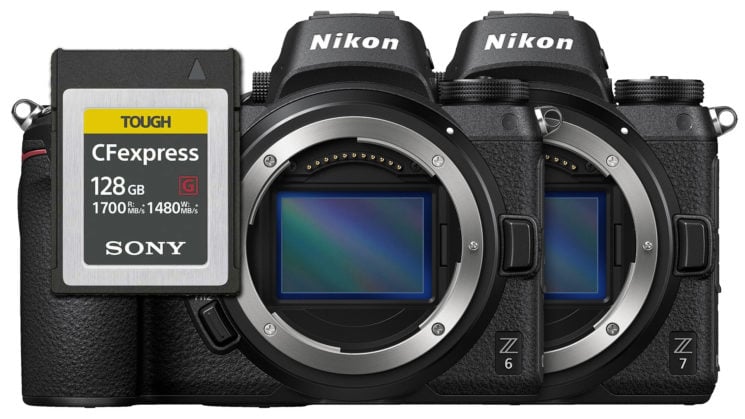 Along with today’s announcement of raw over HDMI for the Nikon Z6 and Z7, Nikon has also announced a downloadable firmware update for the same cameras to provide limited CFexpress support.

Version 2.20 firmware for the Nikon Z6 and Z7 is available to download free of charge and you don’t need to send off your camera to have it implemented, although that support is somewhat limited. It only works for Type B CFexpress cards manufactured by Sony.

CFexpress is the drop-in replacement for XQD, and cards from SanDisk, Sony, Angelbird and ProGrade, are already available to either purchase or pre-order. Some manufacturers, like ProGrade, have said they’ve been holding off even releasing their cards until camera manufacturers like Nikon release their CFexpress firmware updates.

Nikon now joins Panasonic in supporting the new format, although Nikon’s support comes with the limitation of only being for Type B Sony CFexpress cards. Whether this means other cards might work or don’t work at all isn’t clear, although Nikon does say that “Operation is not guaranteed with cards from other manufacturers”. This suggests that cards from other manufacturers might work, they’re just not officially sanctioned by Nikon and they can’t guarantee there won’t be issues.

Initially, only limited CFexpress card types are fully supported and the number of supported cards will continue to expand as additional cards are tested and certified (Type B CFexpress cards manufactured only by Sony Corp. Availability date for the cards may vary by market).

This update doesn’t negate the existing XQD compatibility found on the Z6 and Z7. It simply adds to it and users of those cameras can switch between XQD cards and CFexpress cards at will using the same card slot.

Here is the complete list of changes between Firmware 2.10 to 2.20 for both cameras.

You can download the new firmware at the links below.

CFexpress support still hasn’t been added to the Nikon D500, D850 or D5, although Nikon does mention in the press release that it is still expected to come at some point in the future. It does make you wonder why Nikon announced their own XQD card availability recently.

Panasonic firmware update to add 10-bit 4:2:2 to the G9, CFexpress support to the S1R