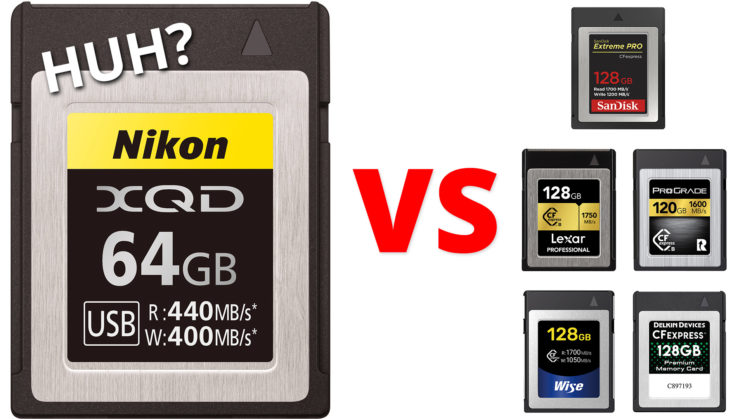 Nikon announced their XQD cards back in August 2018, but they’re now finally in the USA, just in time to become obsoleted by the wave of CFexpress cards being released by everybody else. It only seems to be available in 64GB capacity, and not the 120GB previously reported, but they are showing as available right now to pre-order from B&H for $129.95.

The release comes just at a time when SanDisk, Delkin, ProGrade, Wise and Lexar have just released their CFexpress cards for order (in the case of SanDisk) or pre-order (everybody else), offering 3-4x the speeds of Nikon’s (or anybody else’s) XQD cards.

Nikon’s XQD cards offer read and write speeds of 440MB/sec and 400MB/sec respectively. Their description of the XQD cards goes a little something like this…

Designed for professional photographers and videographers, the 64GB XQD Memory Card from Nikon is made to excel in high-end DSLR and mirrorless cameras, including the Z 7, Z 6, D5, D500, and D850. It offers a storage capacity of up to 64GB. With support for both PCIe 2.0 and USB 3.0 interfaces, this XQD card features read speeds of up to 440 MB/s and write speeds of up to 400 MB/s, allowing it to record 4K video and continuous raw still image bursts. To make this card more durable, Nikon made the contact pins recessed, which helps protect against damage, dust, and electrostatic shock. Also featured is a strong shell strength for use under demanding conditions, and the ability to withstand temperature extremes from -13 to 149°F.

Sales of Nikon’s bleeding-edge memory cards start in January 2020, but they’re currently available in 64GB flavour to pre-order for $129.95, which makes a lot of sense when you can also pre-order a CFexpress card with 128GB capacity boasting more than 3x the read and write speeds (1,700MB/sec & 1,400MB/sec respectively) for as low as $174.99.

CFexpress, for those who still haven’t heard, is the drop-in next-generation successor to Sony’s proprietary XQD tech and is set to be manufactured by at least 14 different memory card companies so far including Delkin, Lexar, ProGrade, SanDisk and Wise mentioned above. But joining them will be Sony, Apacer, Biwin, Adata, Western Digital, Egodisk, Delock, Innodisk and Angelbird.

The only thing stopping CFexpress – which was first shown off way back in April 2018 by ProGrade Digital – from becoming the standard already has been Nikon’s lack of CFexpress support in their camera bodies which contain XQD card slots. All it takes is a firmware update. Until fairly recently, Nikon bodies were pretty much the only things that offered XQD card slots. Now, though, other manufacturers including Panasonic and Phase One have adopted the standard.

I don’t see any logical reason for Nikon to release their XQD card now unless they’re not planning to release the firmware promised almost a year ago anytime soon and want to corner the XQD market. That might make sense in Nikon’s mind now that pretty much nobody else is making them.

If that’s their plan, their market will be quite limited, with Panasonic already having released a firmware patch to upgrade the XQD card slots to CFexpress in their mirrorless bodies. Canon is also expected to house a pair of CFexpress slots in their upcoming 1DX Mark III. I expect many other cameras being announced or released next year will also have ditched formats like CFast 2 to go with CFexpress instead. So, soon, Nikon may once again be the only company using XQD cards.

I can also see some people starting to switch away from Nikon, too, making their market even smaller now that they’ve decided to make repairs even more frustrating than they already were. I’ve even been considering switching, too.

I’ve been a Nikon shooter for the better part of two decades now, and currently have 14 Nikon bodies (9 digital, 5 film) but I just can’t take them seriously as a company anymore. I’ll still keep using the Nikons I own until they die or just can’t give me what I want anymore, but when it’s time to buy again, I’m pretty confident I won’t be buying Nikon again.