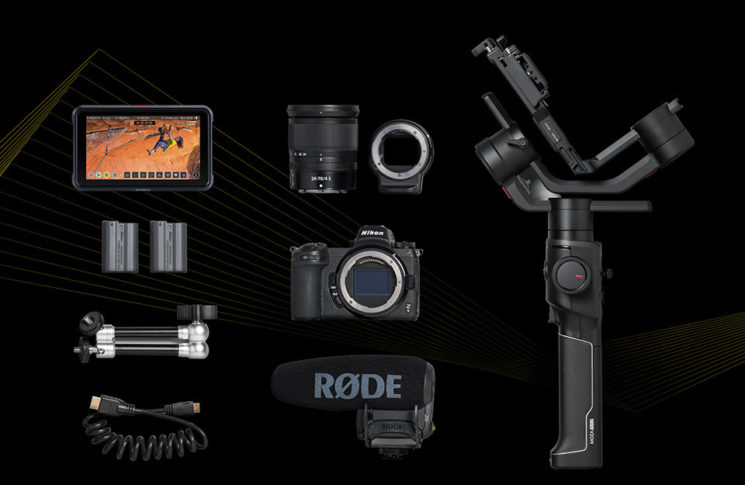 So, it looks like the new Z mount 14-30mm f/4 S lens isn’t the only thing coming out of CES from Nikon today. They’ve also announced that three new pretty major features are coming to Nikon’s Z6 and Z7 mirrorless cameras in a new firmware update. And they’ve announced a filmmaker’s kit to take advantage of one of those features.

Which of these features is the biggest will depend mostly on what you use the camera for. For photographers, you’re getting Eye AF. For filmmakers, The Nikon Z6 and Z7 will soon be able to output ProRes RAW video when recorded externally to the Atomos Ninja V. Finally, Nikon is the first manufacturer to announce future support for the new CFexpress cards.

So, Nikon, the main cheerleader of the XQD memory card format has announced that support for CFexpress is coming. CFexpress is a new format intended to supercede both XQD and CFast 2.0. While it may replace both formats in future camera models, CFexpress is a physical drop-in-replacement for XQD with the same form factor.

So far, the only company that’s teased us with CFexpress is ProGrade Digital, who showed off their 1TB 1400MB/sec CFexpress prototype at NAB last April. There’s been no other word from the usual memory card manufacturers yet as to who exactly will offer CFexpress, but given that Lexar seems to be held up with XQD licensing issues, they may be quick to jump onto CFexpress, too.

Update: ProGrade Digital has been in touch with us to let us know that you can experience the Nikon Z series cameras with ProGrade Digital CFexpress cards in a presentation today (Wednesday, 8th January) at CES in Central Hall 10048.

Next, Eye AF. Yes, that’s right. The feature that everybody was looking for in the Z6 & Z7 announcements is finally coming. Sony’s implementation of Eye AF has spoiled a lot of photographers, and they now expect it as standard from any competitors. There was no mention of it at the Nikon launch, nor when Canon announced the EOS R. But now Nikon is finally implementing it.

Nikon says that it’s still under development. It automatically detects the subject’s eyes to make focusing on them much easier and more accurate. So, portrait, wedding, event and street photographers rejoice!

The exciting one for me, though, is the addition of RAW video support. Again, they say that it’s currently in development, but the Z7 and Z7 will output video in RAW format to the Atomos Ninja V, offering ProRes RAW codec support for your footage. I could be wrong (and please correct me in the comments if I am), but I believe this is the first full frame camera out there to offer any kind of official raw video support (I’m not counting Canons running Magic Lantern), even if it’s not internal.

Given that Sony’s footage is still only 8-Bit, both internally and when recorded externally, this could make a dent in Sony’s dominance over mirrorless video. That being said, Sony is said to be working on sensors which would put up to 8K RAW video into their own cameras, too.

Along with the RAW video output announcement, Nikon has put together a Z6 filmmaker’s kit so that new customers can take advantage of it right away.

The Nikon Z6 filmmaker’s kit is available to pre-order now for $3,996.95 through B&H, and is expected to ship later this month.

It’s nice to see that Nikon seems to finally be taking video seriously.

« New Laowa 9mm f/2.8 is the widest lens for DJI X7 camera yet
How to quickly replace eyes in Photoshop if your focus is slightly missed »