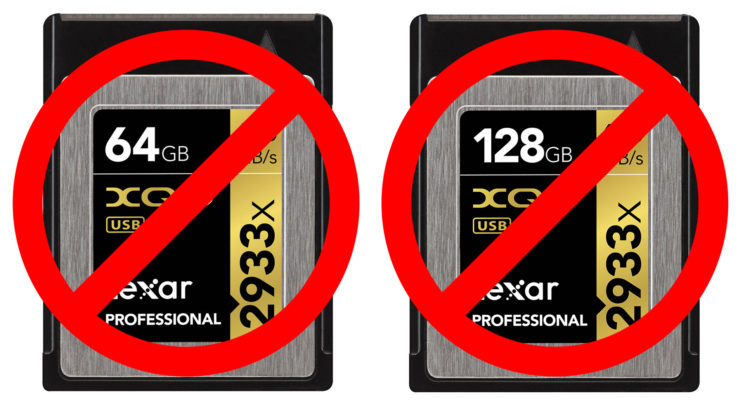 After Lexar’s Polish distributor announced that Lexar will no longer produce XQD cards in order to focus on CFexpress, Lexar has issued a further statement to Nikon Rumors. In the statement, they say that availability of XQD has been “held up by multiple parties”, specifically naming Sony.

While Lexar is eager to pursue the XQD technology, the product availability of XQD has been held up by multiple parties including Sony (who owns the IP) which is preventing us from moving forward. In addition, we are diligently working on future standard of CFexpress through our efforts in the Compact Flash Association and partnerships with key camera manufacturers.

Focusing on CFexpress, well out of Sony’s clutches, definitely seems to be the smart move for memory card manufacturers. Having the same physical dimensions, CFexpress is a drop-in replacement for XQD. And if they don’t have to pay license fees to Sony in order to make them, it may help to drive the cost down once they become available from multiple companies.

But how quickly CFexpress will be adopted once it is available really depends on when the hardware that currently utilises XQD cards will receive firmware upgrades to support the new format.

With Nikon cameras currently being the biggest user of XQD cards and having now announced their own brand of XQD, they may not be in a hurry to provide support for the new format. A format being developed by Nikon’s new memory card competitors, like Lexar and ProGrade Digital. Of course, Nikon could simply be licensing their name to Delkin who strangely announced XQD cards with the same capacities around the same time and don’t really care.

Panasonic has said that their new full-frame mirrorless camera expected early next year will have an XQD card slot (as well as an SD). So, Nikon may be under pressure to adopt CFexpress quickly to keep users if Panasonic chooses to support it early.

The memory card market is starting to get almost as dramatic as the mirrorless market. The next few months are going to be interesting.