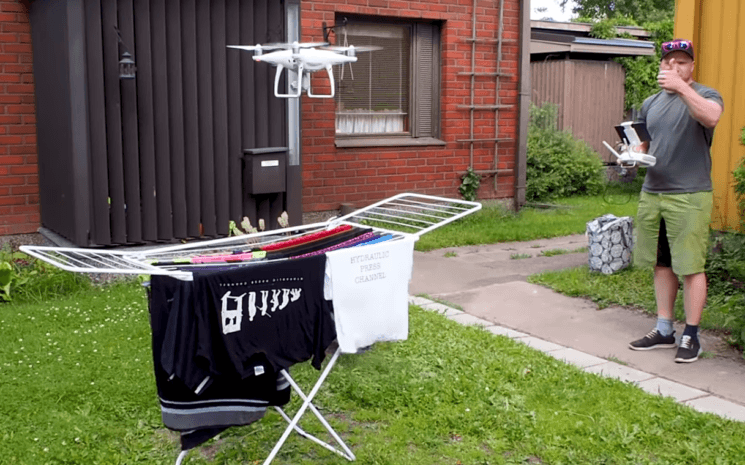 While you can use a drone to take shots and videos (either from the sky or from the ground), there are some alternative uses for it as well. Lauri and Anni Vuohensilta, the couple you may know from the Hydraulic Press Channel, used their DJI Phantom Pro 4 to dry the laundry.

On their other channel Beyond the Press, they published a video demonstrating how the airflow from the hovering DJI Phantom Pro 4 dries the laundry. In the end, they even tape wet boxers to the drone – but it turns out not to be the best idea.

Hydraulic Press channel is one of my favorite YouTube channels. It’s oddly satisfying watching random stuff break in slow-mo (except when it’s a Nikon camera, then it just hurts). Their other channel also features some fun stuff, and this one is so silly that I just had to share it.

While the drone dries the laundry on the clothesline, it looks pretty efficient. Although, I use a $10 Chinese fan for the same purpose. When they tape wet boxers onto the Phantom, it keeps tipping over and doesn’t even manage to take a flight. This is probably better for the drone because otherwise, it might have ended like that Mavic Pro taken down by toilet paper.

This must be the most expensive way of drying the laundry I’ve ever seen. A tumble dryer costs $300-$400 (at least in Serbia), and the Phantom Pro 4 is $1400. Still, if you already own one, this can be an idea how you can use it in addition to shooting photos and videos. Although I’d always rather leave the laundry in front of the fan and take the drone out for some shots.

[Can you Dry your Laundry instantly by using Phantom 4 pro Drone? via Laughing Squid]

« Macphun Luminar for Windows launches with free public beta – wants to take over Lightroom users
A clever trick to tone down reflections in photos: use deodorant »