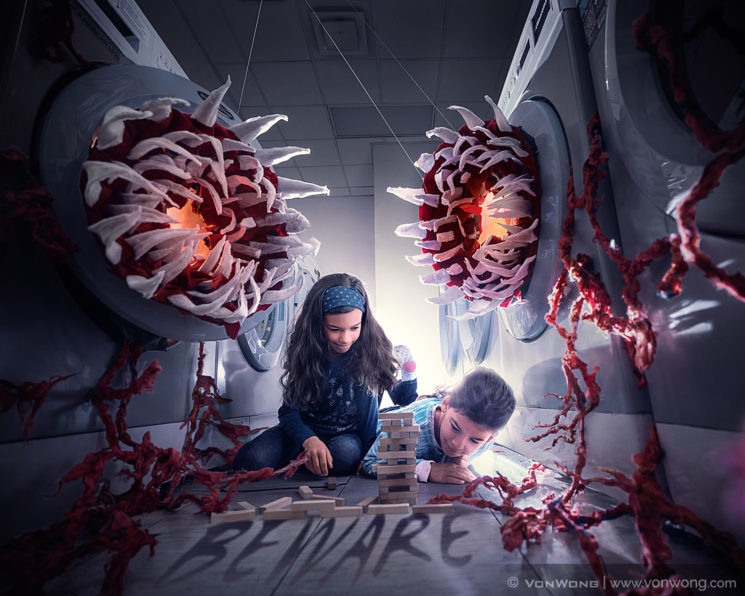 Did you know your laundry is toxic? Tests show that billions of people drink water with plastic fibers, and we can blame our washing machines for it. Photographer Benjamin Von Wong decided to point out to this issue in his usual way – by creating an epic photo project. He aims at raising awareness and hopefully getting electronics companies come up with washing machines which will prevent the pollution.

For his latest project, #FixToxicLaundry, Ben gathered a number of volunteers. Together, they created amazing “laundry monsters” luring from washing machines, representing the “monsters” which pollute our tap water and endanger our health. Their materials were limited, but the efforts were huge. And as a result, Ben ended up with another brilliant set of photos.

As Ben writes on his blog, 94% of Americans drink tap water which contains microscopic plastic fibers. They’re even infiltrated with our salt, seafood, and even beer. The problem is that the wastewater filters can’t capture them, so they end up in our tap water. He learned about a team of young students who created a Fiber Filter. It’s capable of capturing these invisible bits of plastic, and yet – the major washing machine companies still haven’t come up with the solution to do it. Therefore, Ben decided to support the young inventors, but also try and raise awareness using his art.

He gathered a group of volunteers using mainly Facebook, and they built the skeletons of the monsters practically out of nothing – some recycled cardboard, wire, and fishing line. Then, they wrapped the skeletons in clothes to create the monsters crawling out of washing machines. And would you ever say something made of cardboard and clothes could look this scary? 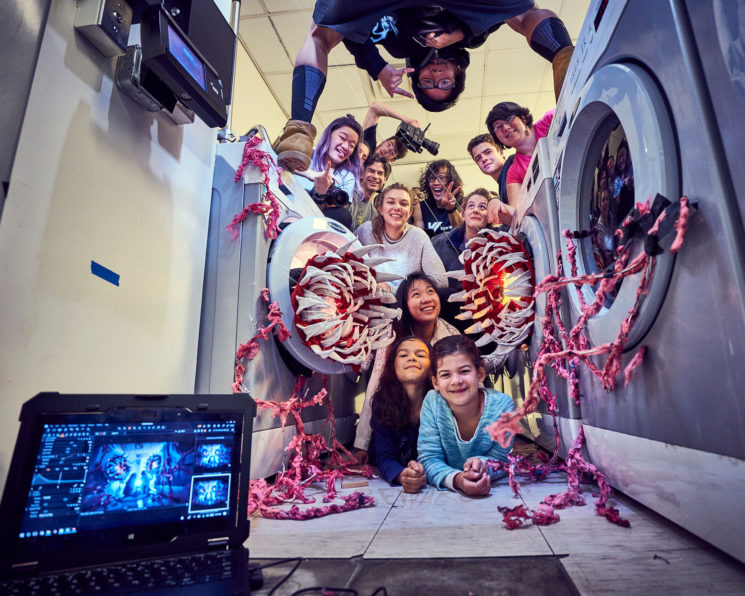 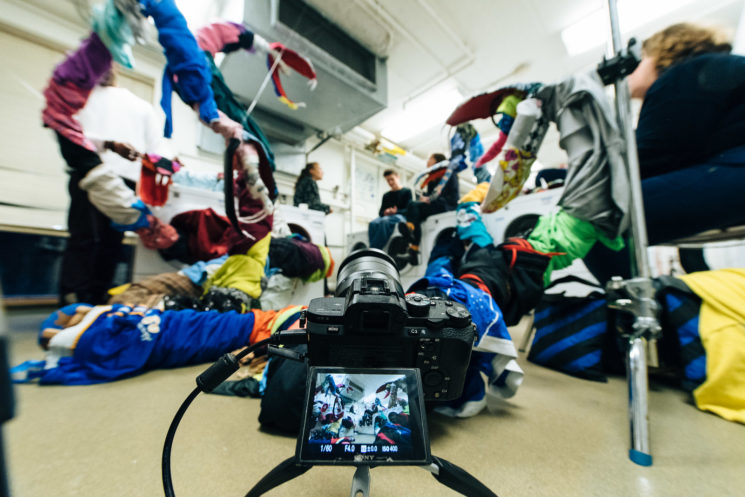 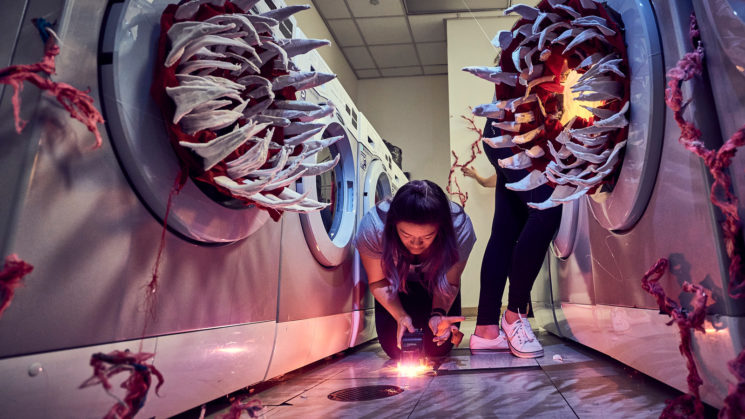 It took hours to set everything up so it looks perfect in-camera. Ben added small flashes inside some of the monsters to give them a glow that would make them even scarier. They look like Demogorgon, so mission accomplished if you ask me. As for those creepy veins – those are just cotton balls dipped in red food coloring and glued to the wire. Still creepy, though. For the word “beware” on the floor, Ben used a pocket projector clamped to the ceiling. It’s a subtle addition to the photo but makes it more obvious to the companies he’s challenging. Take a look at the final images of Ben’s latest project. 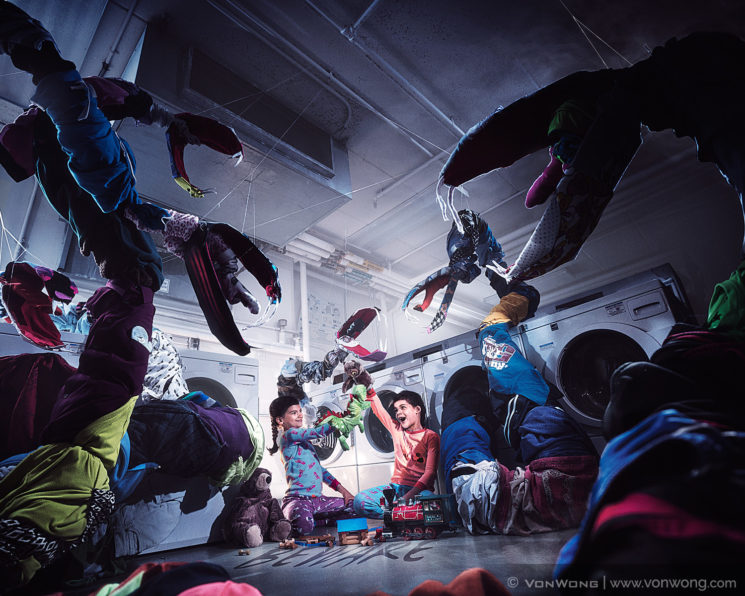 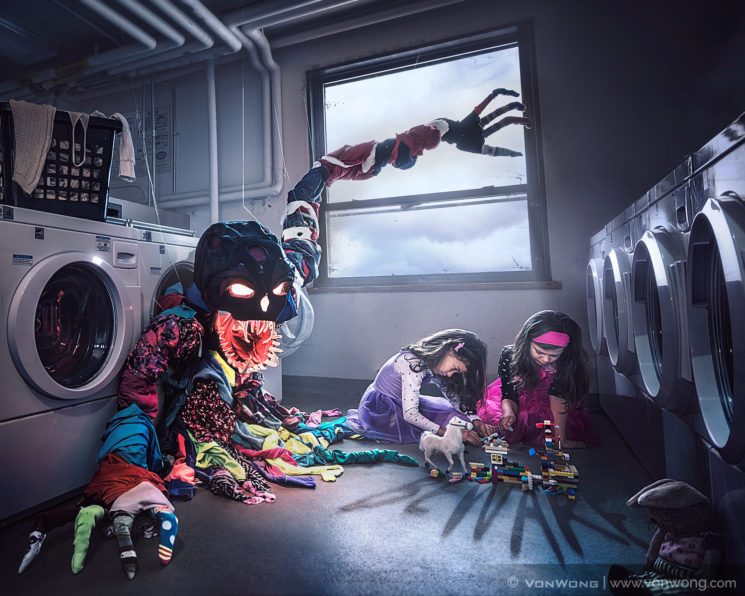 The goal of #FixToxicLaundry is to raise awareness of the issue among the consumers, and challenge companies to come up with a solution. As Ben puts it, “if consumers care, corporations will react and that together, we can come together and make a difference.”

So, if you’d like to make a difference, Ben invites you to join the movement, challenge companies and see who replies first.  Also, learn how to reduce your impact, and spread the word. You can find more about the project on Ben’s blog, and you can check out more of his work on his website, Facebook page and Instagram.