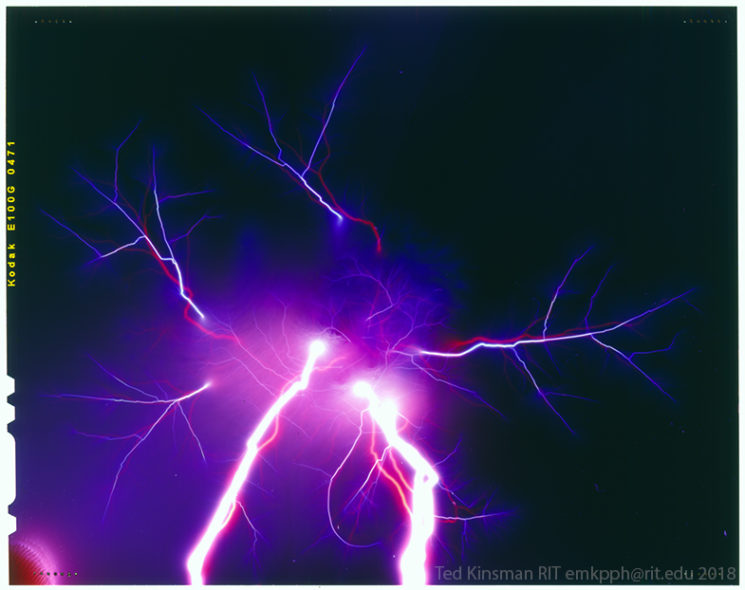 There are still a few very unique and interesting things that can be done with film, but not with a digital camera.  One of these experiments is the recording of sparks on film. Sparks are created when an electrical discharge moves either through or across the surface of the film. I first got interested in this project when I noticed static discharge patterns on x-ray film. Those patterns were due to the charge buildup on the plastic rollers in the auto development machines, but I wondered could I make better patterns in the lab? 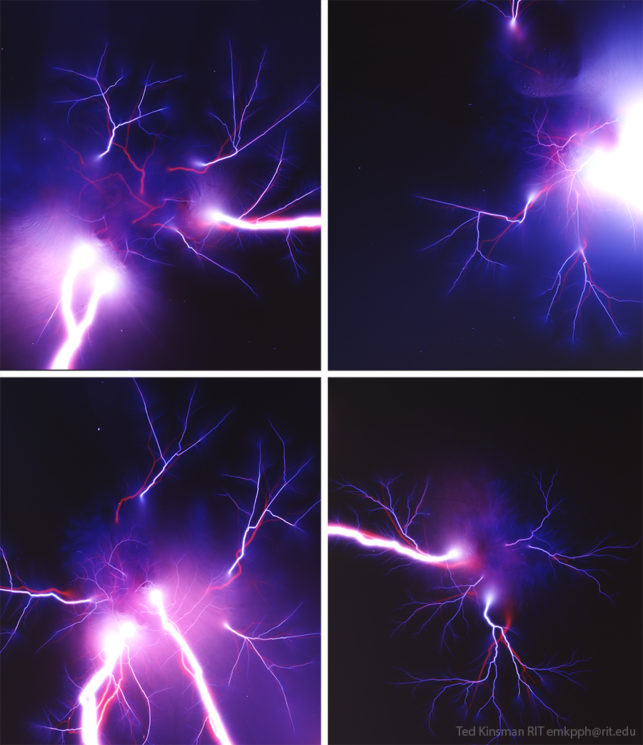 It turns out there is an easy, and relatively safe way to record these patterns by using a demonstration electrostatic generator called a Wimshurst machine. These electrostatic generators were popular around 1900 when they were used to create high voltages. Now these devices are used in the physics classroom to demonstrate static electricity. The Wimshurst machine can generate a voltage in excess of 50,000 volts but the current is very low making it quite safe for a classroom.  The devices can be very expensive, but lately several manufactures have introduced models that are in the 50 dollar range.  This is the perfect device for recording high voltage patterns in a darkroom with no chance of death from high voltage. The experimenter will most likely get a few shocks that are similar to the sparks created by rubbing shoes on a rug.  If the experimenter is careful and holds film with wooden tongs, or places the film in a nonconductive holder there will be few shocks. 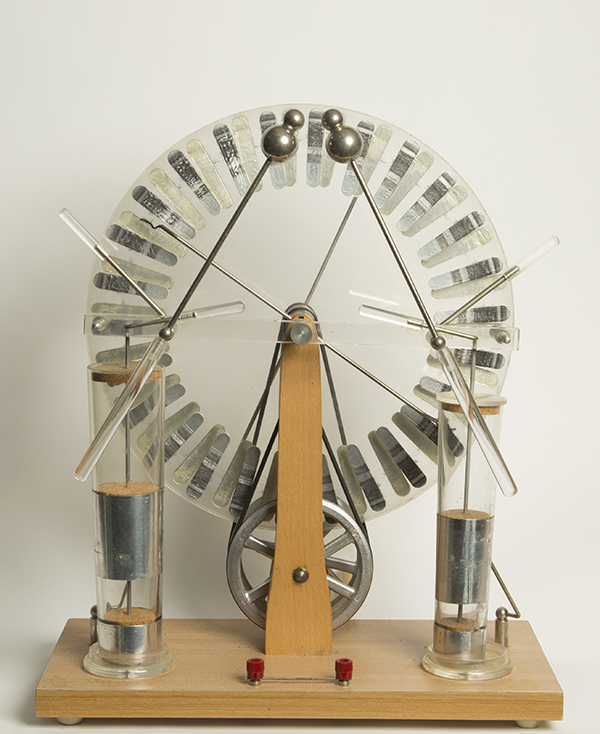 The classic Wimshurst electrostatic generator. This one was built in the mid 1970’s 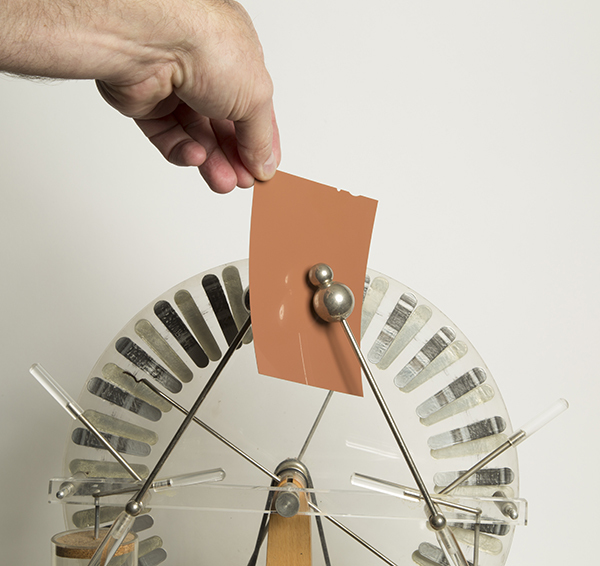 Holding the film. The sparks will arc through or around the film when the potential voltage between the spheres gets large enough. The voltage at which this happens is called the dielectric breakdown voltage.

The dielectric breakdown of the film happens when the film is placed between the electrodes of the Wimshurst machine. The Wimshurst machine is hand cranked so a charge builds up between the two electrodes.  When the charge builds to a point that the film can no longer hold up, the film will breakdown into a conductor and allow the current to pass through. When this happens, there is a large spark created and a loud snapping sound. The film will be exposed by the light generated by the electricity traveling through the air and film.  These fractal patterns of electricity are easiest to recorded in a sheet of film. To test out this process I used both black and white film, x-ray film, and color 4×5 format film.  Different manufactures yield different types of patterns. Fujifilm and Kodak color films show different colors as well as different structures to the sparks.  The different patterns are due to the different manufacturing materials. I used a lot of black and white x-ray film since it was easy and quick to process in the lab. The color film had to be sent to the last local lab for development, a process that took several days. 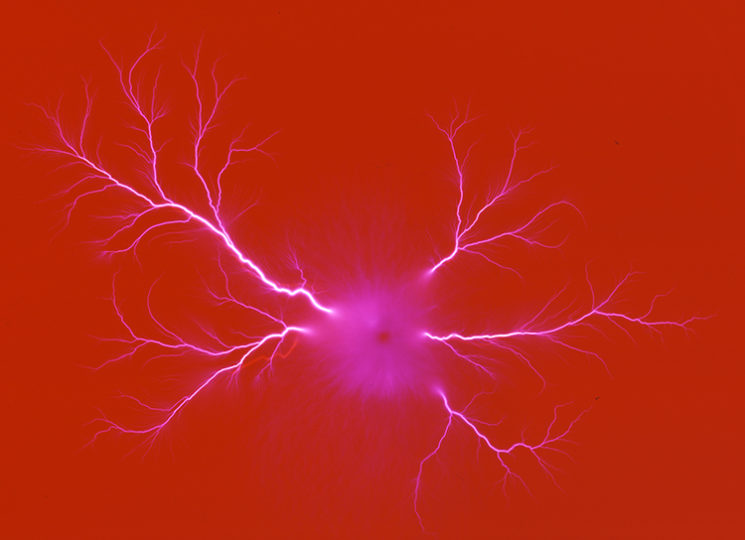 The dielectric breakdown of a Fujichrome Velvia 100 Daylight film yields much different colors than the Kodak film. This is due to different electrical properties and spectral sensitivity of the Fuji film.

The procedure was to hold a sheet of film between the electrodes until there was a big spark then to hang the negative in a dark box for a few hours. This wait time was very important to give any residual charge time to dissipate to the air.  Without this wait time the film would spark as the film was placed into the conductive liquid of the developer. The color film was placed into a box and taken to the development lab. The process of exposing and charge dissipation of the film all needs to take place in the dark.

I hope the reader will give this a try and see what types of patters can be created. Please keep in mind that a hand cranked Wimhurst machine is safe for experimentation, while any other high voltage source can be lethal. 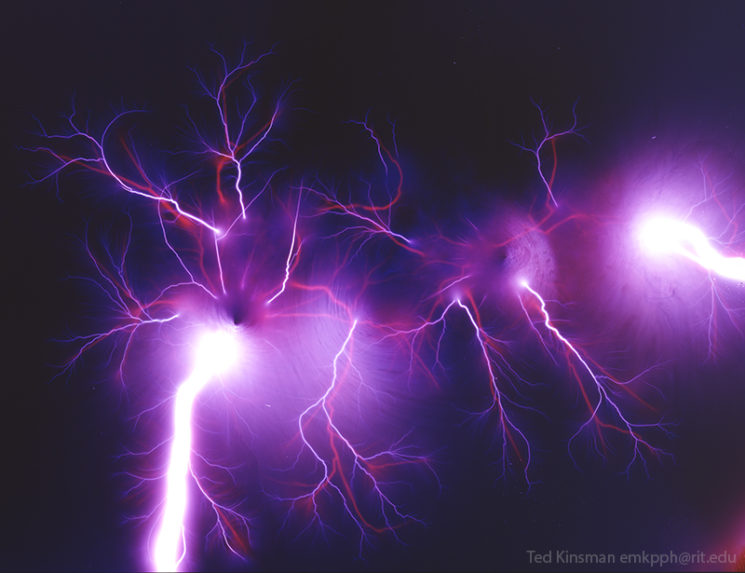 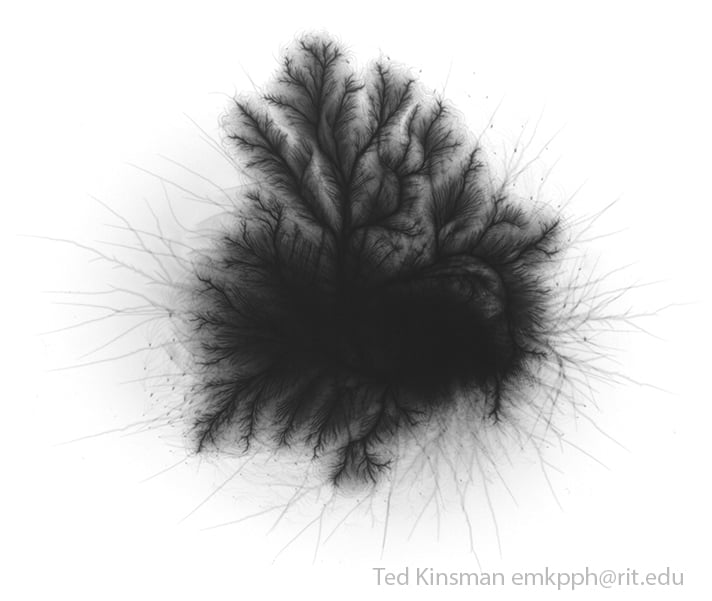 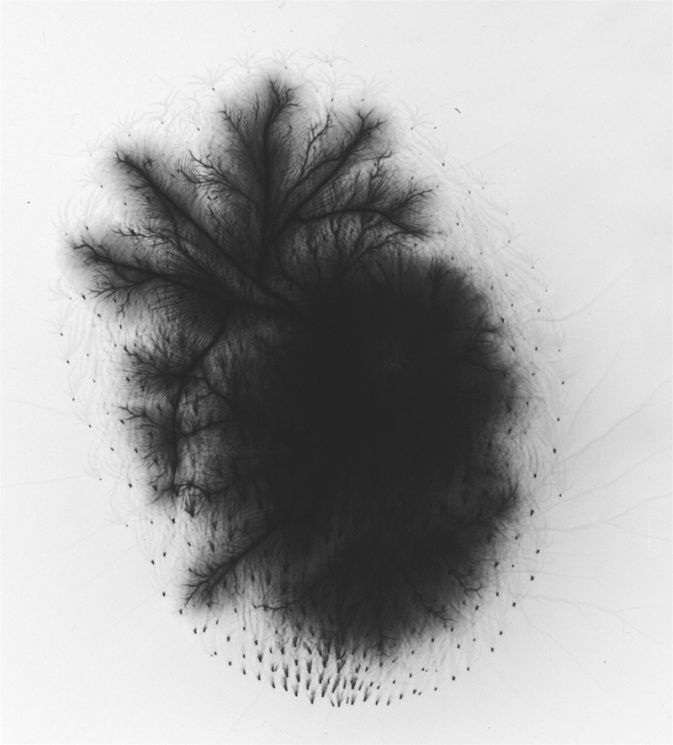 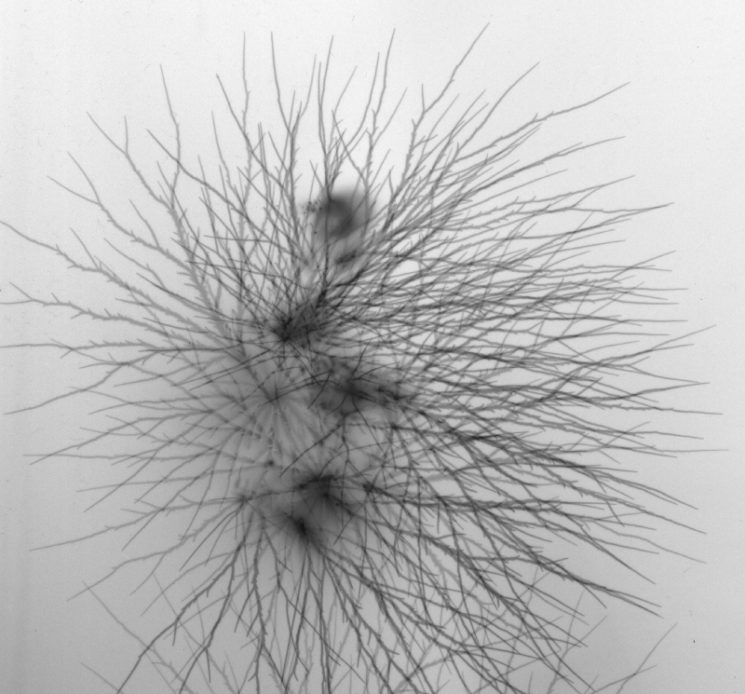 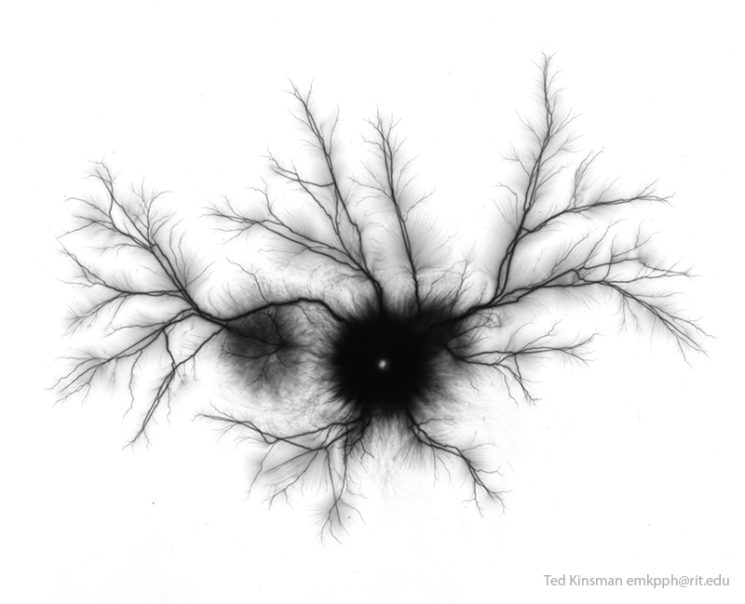 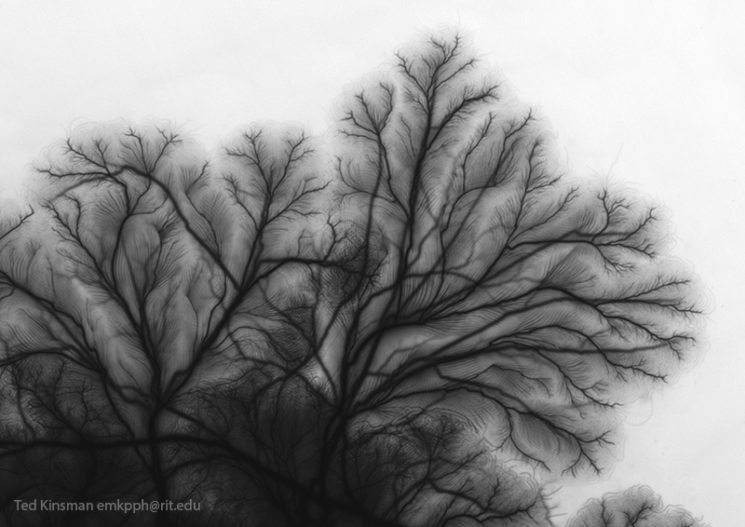 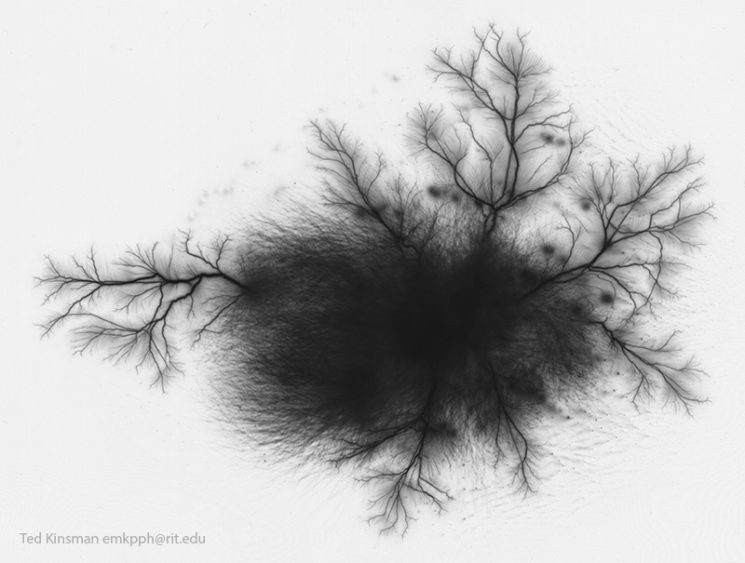 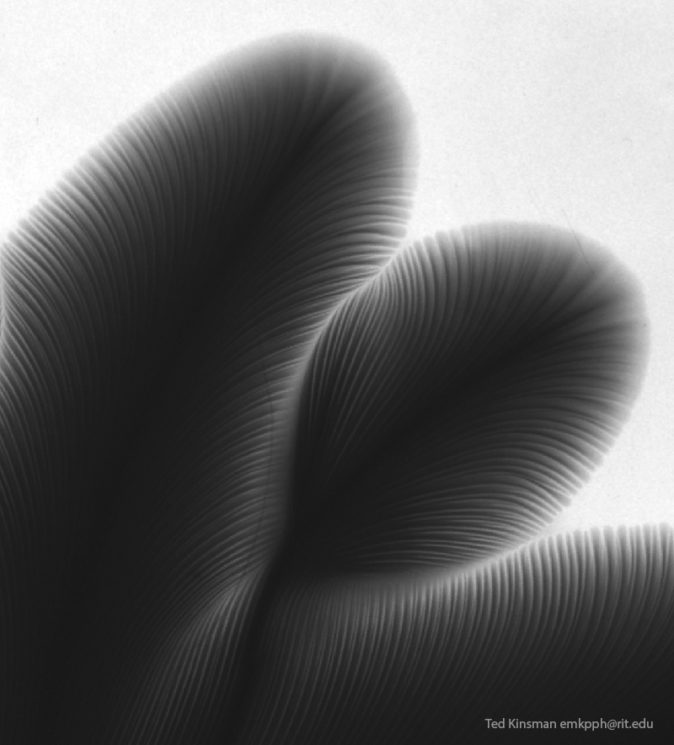 This is a close-up crop of an electrical discharge. Fujifilm X-ray film

In this experiment, the film was slowly pulled between the contacts of the Wimhurst electrostatic generator. Kodak Min-R X-ray film. 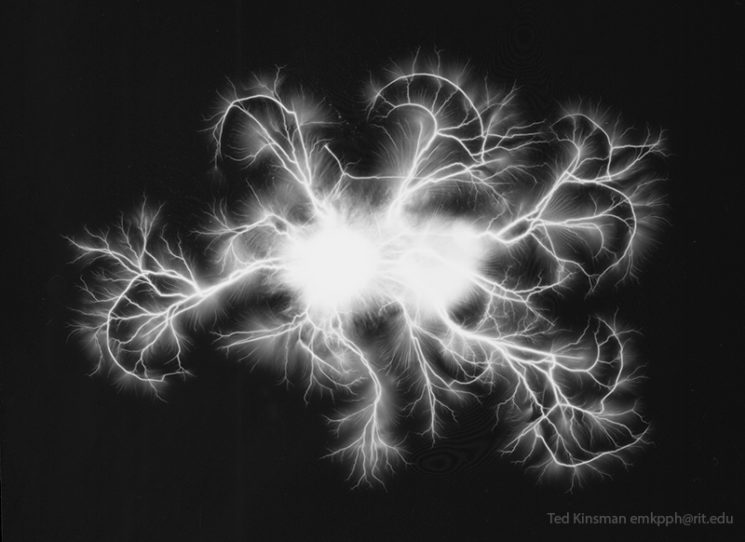 A spark pattern on x-ray film. The image is inverted to show the sparks as white. 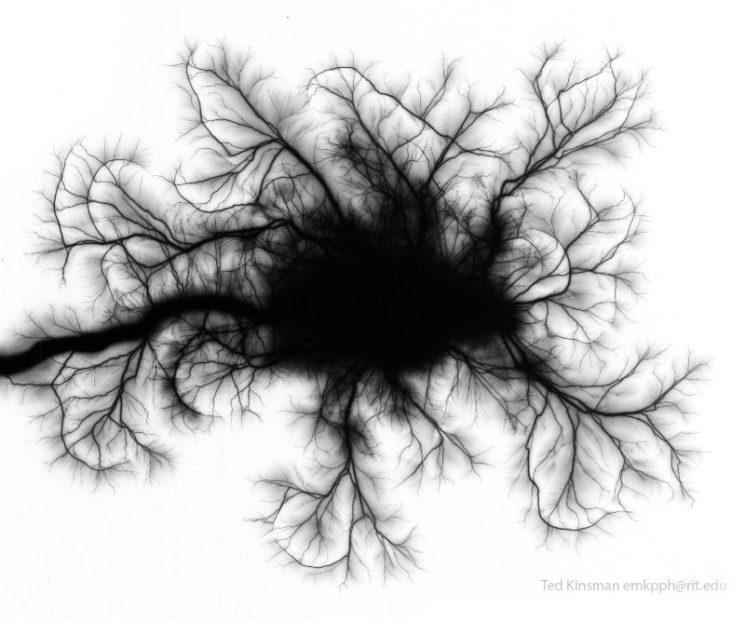 Ted Kinsman has worked as an optical engineer, a physicist, and a physics instructor before joining RIT to teach the technical side of imaging. Kinsman teaches classes in photographic instrumentation where students control cameras with micro-processors, a high-speed imaging class where students photograph bullets in flight, and a class on scanning electron microscopes. He has published numerous articles and books. His most recent book is Cannabis: Marijuana under the microscope. A book dedicated to scanning electron imagery. This book will be published in May, 2018 by Schiffer Publishing.

How to add glow to sparks in Photoshop

How I Took These Photos Of Electric Capoeira Fighters