I have used an electric cigarette as a small smoke machine. My first version was bit and pieces glued together but that wasn’t very robust and broke. No that I have a 3D printer I wanted to revisit this project and make it properly.

Smokers can suck smoke to their lungs and blow big clouds of smoke. I’m not a smoker myself so that will only end up in coughing. So I wanted to reverse the operation and directly blow air into the cigarette and get smoke out directly. This way I also get great precision where the smoke goes, much more than with traditional smoke machines.

Disclaimer: I don’t use any nicotine or any additives that are harmful to your health, only pure vegetable glycerine. Studies that I have read say that nicotine and heavy metals are the ones causing trouble, not VG. And by blowing the air I won’t get my lungs full of it. So personally, I don’t consider this to be more harmful to me than bigger smoke machines. 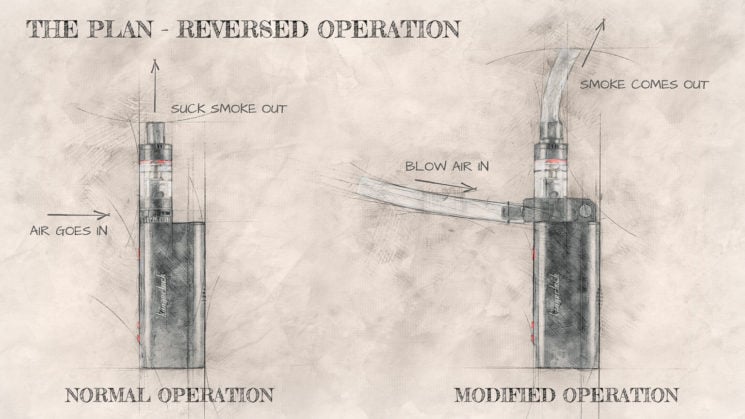 I designed the reverse ring in Fusion 360 which is pretty easy to use 3D cad program. The plastic ring encapsulates the air intakes in the e-cigarette so air can be blown in. After the design was ready I then printed it with PLA plastic. I added a short tube to blow side and longer on the smoke side so I can control more the smoke precisely. You can find the STL file here and Fusion360 archive here. 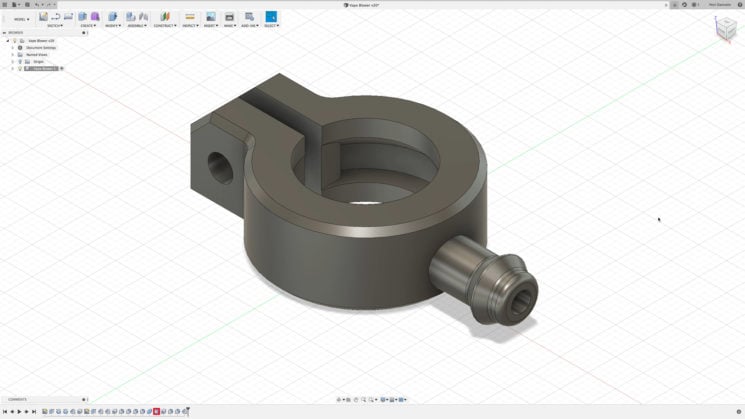 I made headstone and coffin props from XPS foam (more detailed story here) that were suitable to test with smoke. I build the set in my home studio and used 2 x Godox AD200 and one Yongnuo Speedlite for this setup. I had a tube and radio remote in my right hand and an e-cigarette on the left. This way I could do all this by myself. I took several shots blowing smoke to different parts of the setup planning to combine them in photoshop. This was way easier than trying to cover the whole setup in smoke for one shot. I was able to blow smoke than lingered on the tabletop and looked like mist. I was really happy with the results. 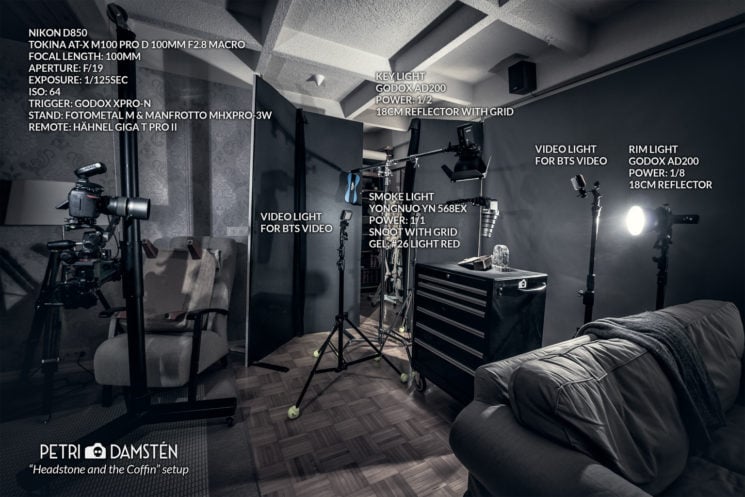 I loaded all the shots in photoshop, aligned the layers, and put them in lighten blend mode. I then added masks to the layers to pick just the parts I wanted. I added a stone wall to the background and blurred it to give the image some depth. After that, it was business as usual. Color Efex Pro, dodge & burn, light effects, color grading, and sharpening. 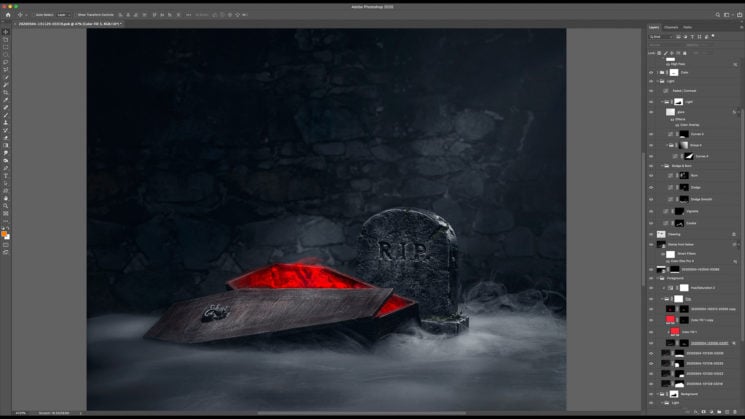 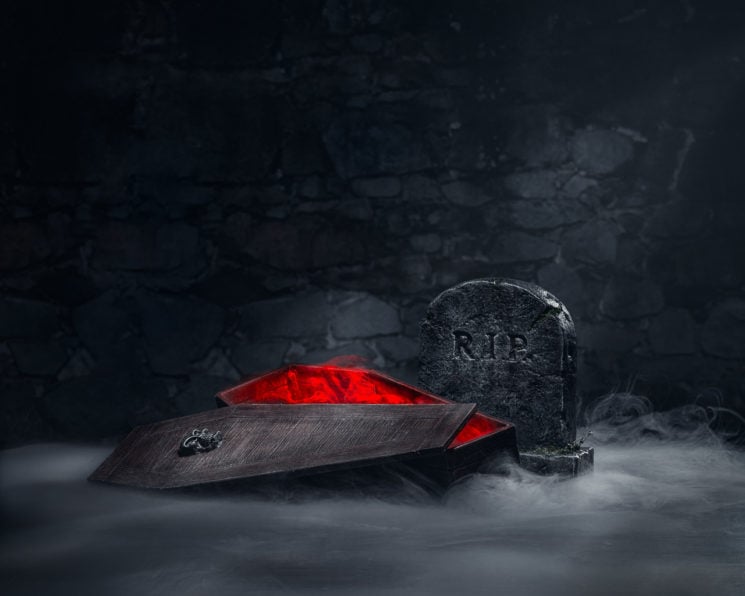 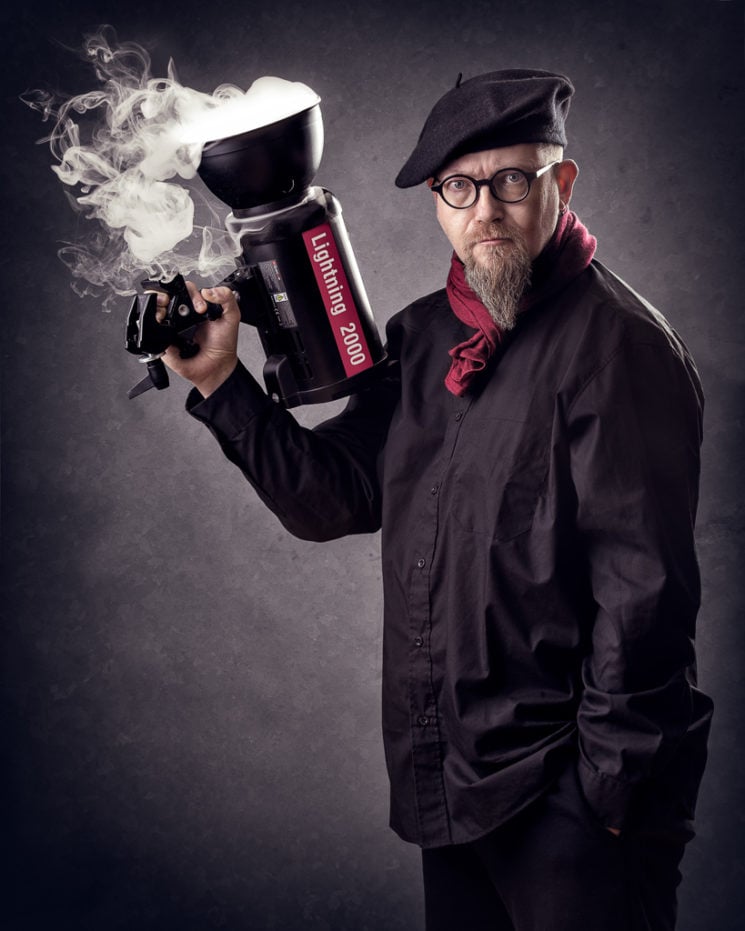 Petri Damstén is a fine art photographer from Kuopio, Finland. Photography plays two roles in his life. It’s a passion that started after his retirement from his day job as a software engineer in which he has a BSc degree. For him, the picture making is also a very therapeutic process to handle feelings and thoughts in a creative way. You can see Pertri’s work on his website, and be sure to follow him on Instagram, Facebook, Behance, YouTube and Twitter. This article was also published here and shared with permission.