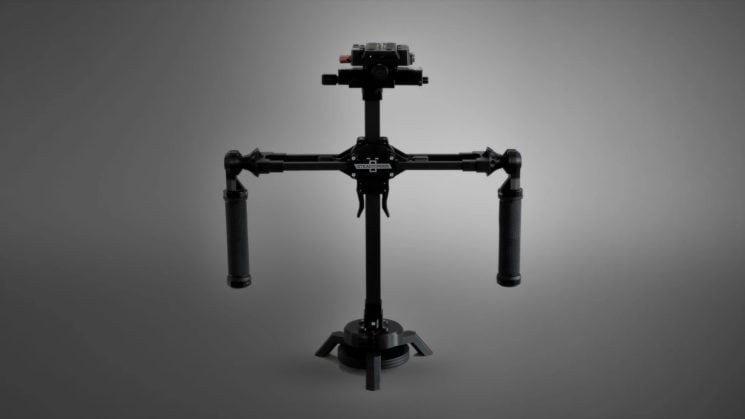 Gimbals have become one of the most commonly used camera accessories when filming video. And for the most part, there have been two very different types. Gravity stabilisers, like the Glidecam, and motorised 3-axis gimbals, like the Zhiyun Weebill Lab and Crane 2. The SteadyCross seems to be something sort of in between.

It’s a 3-axis gimbal, however, it’s not powered by motors & electronics. Nor is it simply another gravity stabiliser. The SteadyCross keeps its level using magnets. It’s made using 3D printing with TitanX ABS engineering filament, and complete gimbals are currently available to backers through Indiegogo.

The SteadyCross gimbal will take a load up to 3.5lbs, and contains no electronics or batteries. It features a patent pending rotor, ergonomic rubber grips, a compact three-legged base, is water & dust resistant, and can be disassembled for travel.

That it contains no electronics at all means you never have to worry about batteries running out. You also don’t have to worry about firmware updates, mobile apps, or compatibility issues. Instead, the SteadyCross uses Eddy Current to help with stabilisation, using an aluminium ring with an array of neodymium magnets. 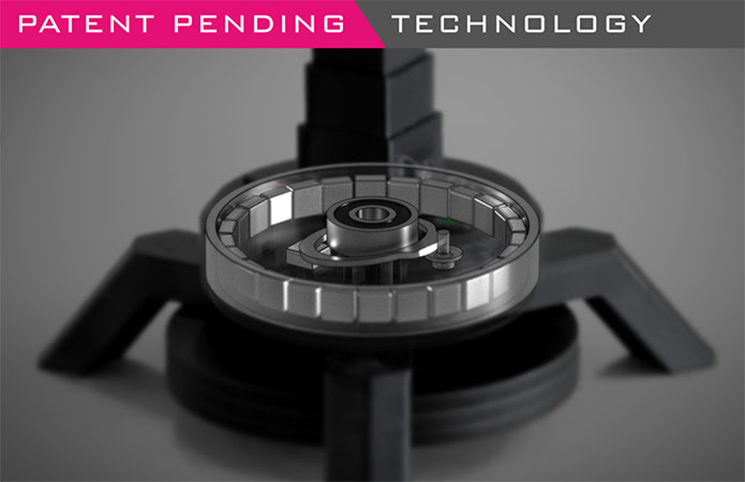 It also features a frictionless rotational damping system, working on the same principle as the braking systems in high-speed trains and roller coasters to create smooth transitions between movements or when coming to a stop. And they say that a torsion limiter almost completely eliminates the pendulum effect often seen with gravity-based stabilisers.

The total weight of the gimbal is 2.2kg, and it can carry a total load of around 1.6kg. So, for a dual handle system, this isn’t all that heavy at all. The Zhiyun Crane 3 LAB weighs a little less, at around 1.9kg, but that bit of difference between the two isn’t terribly significant. 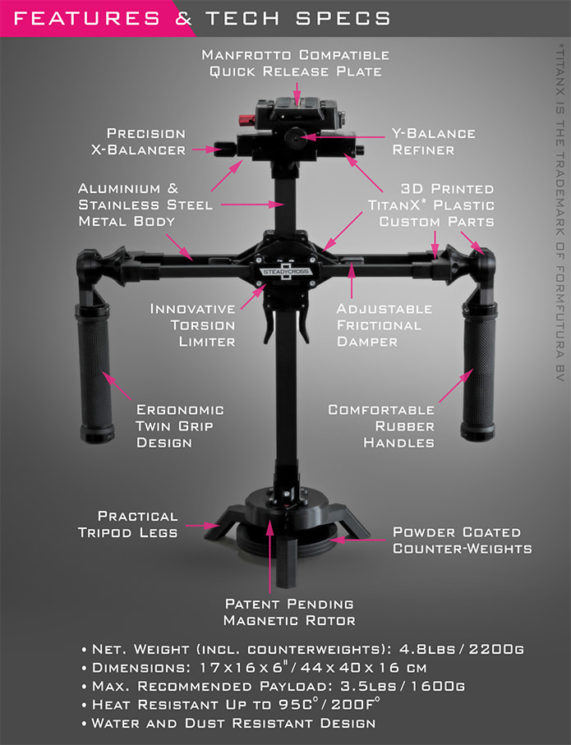 The example footage in their promo looks quite good. But, being a completely new concept for the mechanics and physics of gimbals, it will be interesting to see how it performs in the real world, and how it compares to both gravity-based and motorised 3-axis gimbals.

One thing that annoys me a little, though, is the selling of 3D printed products in this way. And I get it, I really do. I’ve been getting heavily into 3D printing over the last year, and it’s fantastic to be able to just design something, print it, and it works well. I’ve got a bunch of 3D printed items here that I’ve made and use regularly. But I know that if they fail, then I can just load up the file, print off another, and I’m good to go. Because prints generally do eventually fail with the stresses that these kinds of applications apply to the parts.

I just feel like, unless you’re planning to release it as an open source project, where people can print their own replacement parts, as is happening with the Standard 4×5, then 3D printing should just be used for the prototypes to prove the concept works. But then when you start asking the public for funding, it should go towards creating the tooling for much stronger, injection moulded parts.

If it’s to stand up to the types of rigours of daily use a gimbal typically receives, then I’m dubious whether 3D printed parts will cut it in the long rung. Until we see these things in the real world, it’s impossible to know how well the parts will stand up. Or, if they will fail, how will they fail? And will it send your expensive camera rig crashing to the ground? It does put me off a little from wanting to back the project myself.

To be clear, I’m not saying that 3D printed parts will break. Just that they generally do when put under continuous strain or load. I’d love to be proven wrong.

All that being said, if something does break, and assuming they don’t release the STLs so you can just make your own spare parts, then a replacement part can be printed up and shipped out to you the next day, in theory. The words “not in stock” should never be in their vocabulary. You’ll still have to deal with shipping times, but you’d have to deal with that for injection moulded parts, too.

3D printed parts also means that as changes and design upgrades come in the future, you can just buy those upgrade kits to easily retrofit to the gimbal you already own. And it means those upgrades can come at a much lower cost because injection moulding for a small run is very cost-prohibitive. The Prusa i3 3D printers are built and sold on this principle, with regular updates and upgrades being released – of course, Prusa printers are also open source.

I’m quite happy with my current gimbal situation, although I am curious how this one compares in real-world use to something like the Crane 2 or Crane 3 LAB. Because when it comes to the price, there’s no comparison. The SteadyCross is the clear winner. I wonder if there’ll be one at The Photography Show in March that I can play with and find out?

The regular retail price on the SteadyCross will be $399, although you can pick it up for $249 if you back through their Indiegogo project right now. There are 96 left at that price, and 200 at $299, with shipping expected in May and June respectively for the two different price points. And you can find out more on the SteadyCross website.

This action camera comes with a built in 3-axis gimbal

Build your own 3-axis gimbal