I first saw Zhiyun’s Weebill LAB gimbal at IBC 2018 and then two weeks later in Photokina. When I saw it first, it was alongside the Crane 3 LAB, and I thought that the two shared a pretty weird design.  I asked Zhiyun if I can review a kit, they kindly agreed. I was blown away.

So before diving into the specs and features, there is a funny misunderstanding to share. The WEEBILL was standing alongside the bigger brother Crane 3, and at first, I thought that the exhibitor was trying to explain that the smaller gimbal costs less than the Crane 3, resulting in a Wee Bill. ($599 vs. $899) Boy, do I feel stupid now. Anyways, turns out that the Weebill is Australia’s smallest bird, a name that was chosen to emphasize the gimbal’s small dimensions and lightweight. LAB, stands for Zhiyun’s premium line, hence the combination WEEBILL LAB. Read on for a full review. 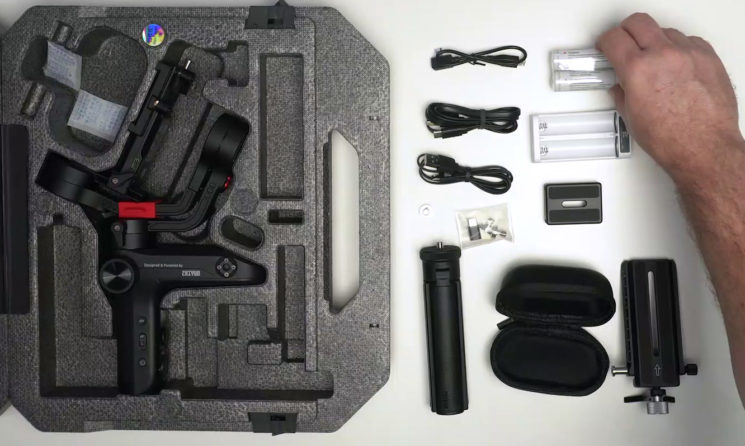 The weebill lab comes fully equipped and is (almost*) ready to run out of the box. Here is what you get:

One thing that I liked here is the new case. Unlike the previous Crane 2 case, the Weebill case is a 100% foam case that felt more compact, while also providing better protection to the gimbal. 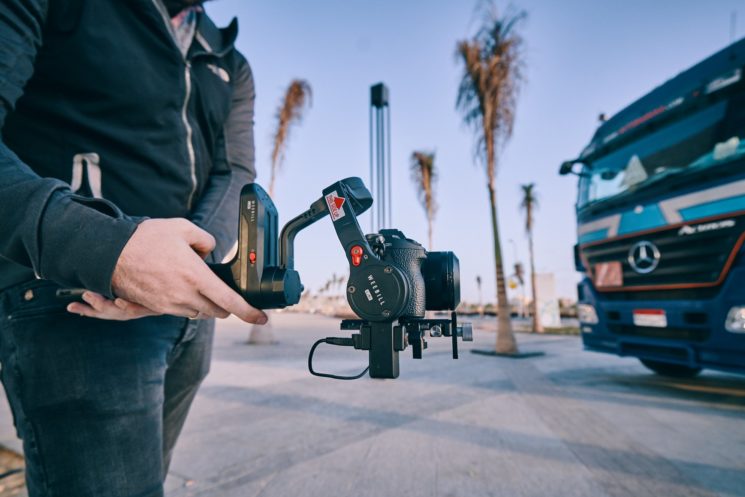 I have been using the Crane 2 for a while, and this iteration (while for smaller cameras) seems like Zhiyun took all the feedback from customers like me and implemented it into the Weebill (and probably the Crane 3 as well).  One of the first things you’ll notice is that the Weebill is not a stick with a gimbal head, but a reversed L that can accept a small tripod in one of two sockets.

The first socket is placed at the bottom of the handle, and when you connect the tripod to it, you get the regular “stick” shaped gimbal. In this mode, the Tripod opens so you can rest the gimbal on a table or any other surface. 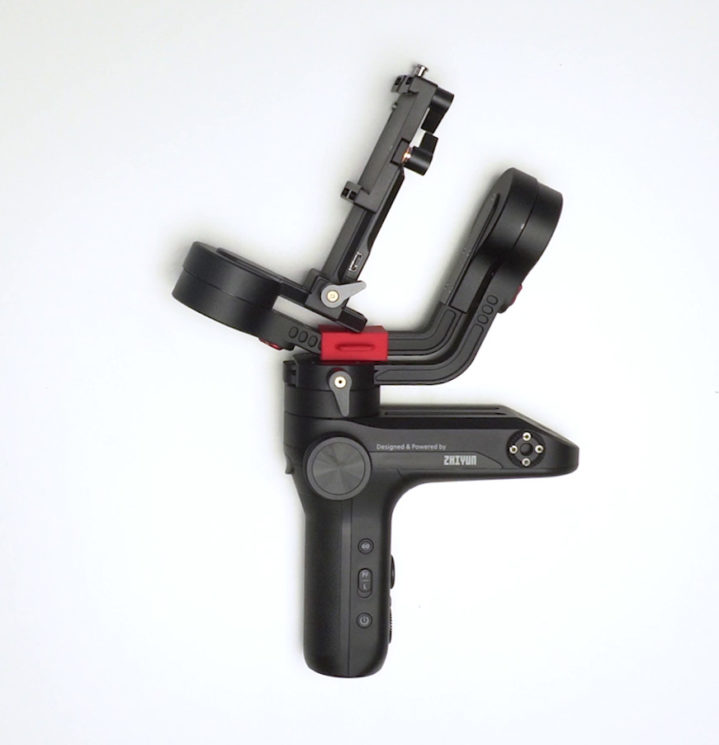 The magic happens, though, when you connect the handle to the upper port. Then you get a gimbal that is perfect to be used underslung for low angle shots. The handle is built in a way that took all the strain out of my wrist and was extremely comfortable to carry for long durations.

The handle is made from a combination of plastic on the front and some sort of softer rubber on the back (where the thumb and the forefinger meet). It felt very natural on my hand. Remember that reversed L shape? When holding the gimbal in the “stick” form, it provides a little more rest on your forearm, taking away a bit of the strain.

I did find my hand pressing the joystick when I went low, and the solution is to place youer hands at the tripod part of the gimbal.

Lastly, there is the weight of the gimbal. If you’ve dealt with other gimbals, you’d be surprised at how light this gimbal is. Allowing for a 3kg (6.61 lb) is quite unusual for this small of a package. 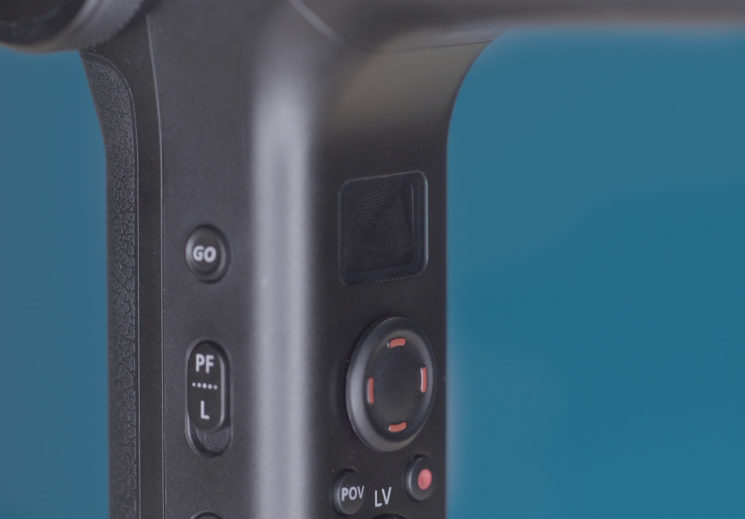 The Weebill is controlled via four main areas:

On the “back” of the gimbal – the side that is facing you – there are two big buttons, a joystick to control the gimbal movement, and a disc to navigate the menus. This area is also where they put the little OLED. I love how the buttons are separate and that you no longer need to remember sequences of buttons to change some settings. (remember the quadruple press from the Crane 2?).

The OLED monitor could have a better placement. The little reverse L hides the OLED monitor on some positions, and I would love to see that OLED move to be above the top tripod port. This would make it visible in more use cases.

A third control is placed where you would usually put a “trigger”. It changes the “follow mode” of the gimbal for the time the trigger is pressed. It took some getting used to vs. how it is done in the older Crane 2,  but once I got used to it, it felt more intuitive than how it was done on the older gimbals via the menus. I think that if this is your first gimbal, it would feel very natural. A double-click on the trigger also resets the gimbal to the initial position. This was very easy once the gimbal got “confused” or just needed a quick reset.

One thing worth noting on the trigger mechanism is that there is no way of locking the gimbal in follow mode. It’s all well if you’re only filming in pan-follow mode. But if you want to add pitch as well, you can’t do it in low-mode (no trigger access). For me, it’s a shortcoming, because it takes away the ability to shoot dolly moves with a tilt in underslung mode.

The fourth and last control group is found on the left side of the handle. There is a small switch (thank god for the mechanical switch) to toggle between L and PV modes. And there is a small button to trigger the PhoneGo mode, which I would probably relabel as action mode where the gimbal simply follow your movements if you need to track something fast.

There is another big wheel used for pulling focus if you have the follow focus module, we dd not get one and did not test this function. 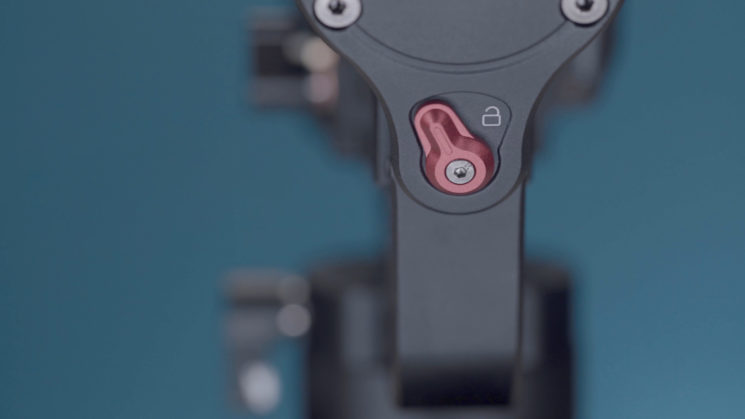 Each axis can be individually locked which means that you can calibrate each axis separately while locking down the two other axes. I love this feature, and it does make calibrating easier.

The other clever mechanism is the double quick release plate. Imagine a plate that is sliced into two thin plates. The top part always staus with the camera and the bottom-part stays with the gimbal. You calibrate the camera by attaching the two halves together and locking a small lever. If you take your camera off the gimbal, the bottom part of the plate stays on which means that you don’t need to recalibrate when you lock the camera on the gimbal again.

A nice side effect of the locking latches is that its now easier to carry the gimbal outside of its case. It stays locked and behaves nicely while being moved around. 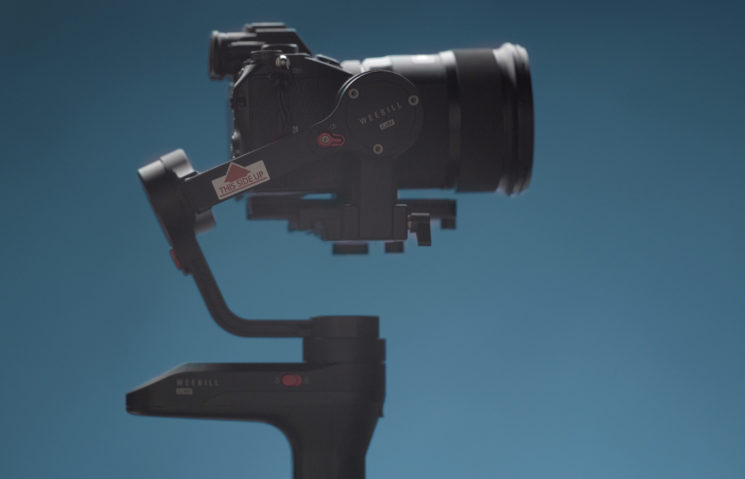 The motors on the Weebill LAB are strong but not as strong as its bigger “crane” brother. This is understandable with the weebill aimed at mirrorless cameras. We tested with a Sony A7III and a  Samyang 35 T1.5. We had to put the motors on “medium” settings. (with the Crane 2, we used the “low” setting for the same combo). On the other hand, we never needed to get to “high” settings.

You will know that you need to adjust the motor strength settings because you will get a nasty vibration on some angles. The A7III (700 g) and the  35mm Samyang (720 g) weigh about 1.4 kilos, and they balanced well. With the  50mm canon art lens  (815g)  and an MC11 adapter (~400g) we were scratching two kilos and had to set the motors on high. While on the spec the gimbal supports three kilos, our 2 kilos put it on its highest setting. This could be relevant to how the weight is distributed. Maybe more compact three-kilos setups will work, but I would not recommend using the gimbal with non-native lenses.

We did do a quick test with the Sony RX-100 and even with the included riser balancing was not trivial. I guess it’s just too small.

The footage using the medium setting was just as smooth as we expected, even when running with the gimbal. See the video for some test shots.

The Gimbal can connect to some cameras. After fiddling with the Sony for a bit we found out that for the gimbal to connect to the camera you need to set the following (I am putting these here so you don’t have to go through the same excruciating process of trial and error that we did):

We used an iPhone 7  for controlling the gimbal. And magic happens. You can start and stop recording from the phone or the handle, see your framing, and control various settings. One feature that the team liked is the ability to see helper grids.

The phone holder does not come with the Weelbill by default (why?) and you’d have to get it separately for $30. I did not get the phone holder, so I cobbled something together from a small ball head and a phone selfie adapter. 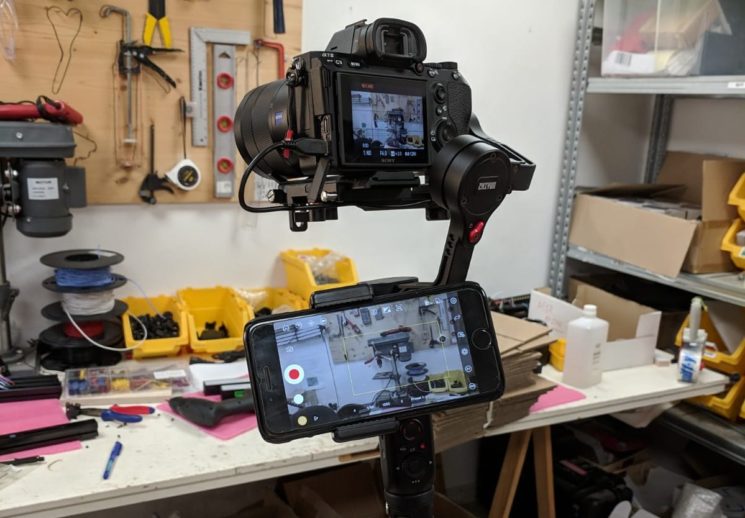 The experience or using a phone as an external monitor is something I am familiar with and for small setups, it works quite well. Most modern phones can handle quite a bit of sunlight and they are always with you. You would want to go go to airplane mode and only open Bluetooth and wifi to avoid any incoming calls. There is a bit of a delay when using a smartphone tough, so it is not as smooth as using an external monitor.  In the end, the choice to use a phone (cheap bright, always with you) or an external monitor (brighter, more to carry, no delay) is a personal and budgetary preference.

The app worked great when it worked, but it did crash a few times. I hope as time goes by, Zyhun will have a few stability releases.

Here are the links for the app: Android, Apple

This is something that we did not test ourselves, but we did look at the documentation. And it looks like the WEEBILL is compatible with most cameras that you would want to use it with. The list includes most Sonys: A9, A7III, A7RIII, A7RII, A7SII, A6500, A6300, A6000. I wish the older A7II was in that list as well. On the Panasonic front, it includes the GH5, GH5S.

Each camera supports various lenses and you can see the full compatibility guide here (December 2018).

Other things worth mentioning 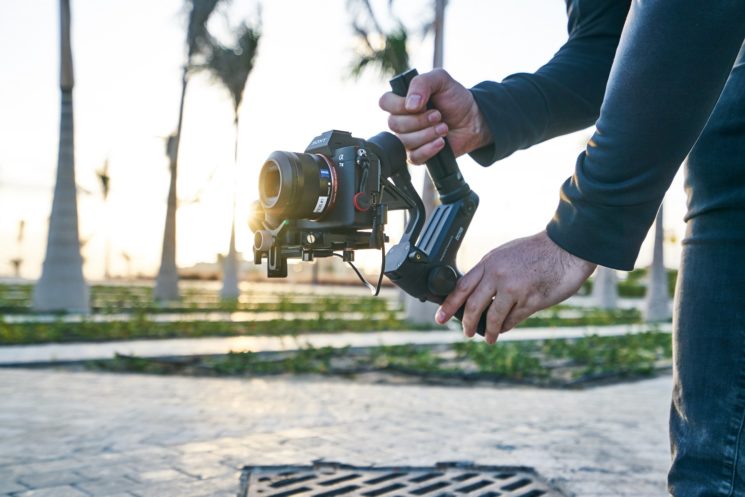 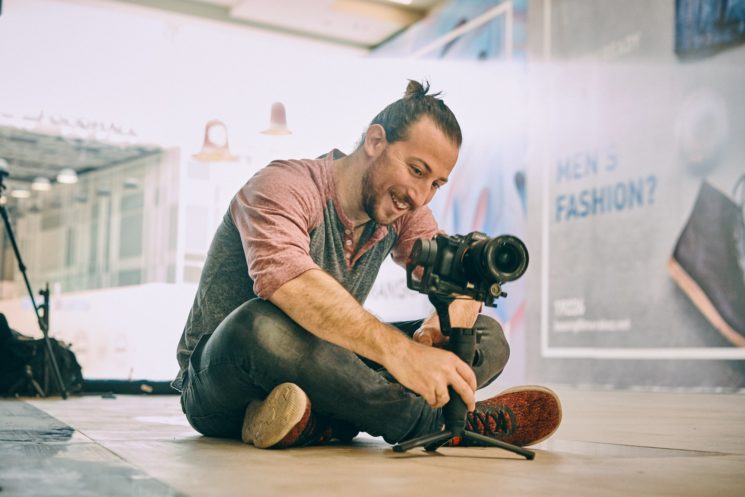 If ten years ago someone told me that in 2018 I will be holding a super accurate stabilization device for under $600 I would have laughed in their face. Boy! Did tech advance!. I love the Weebill LAB for its form factor, smooth operation, phone compatibility, weight and price point. I would love to see some improvements to the OLED location and app stability, but those are not deal breakers for me. I think that for small mirrorless cameras the Weebill provide excellent value and I recommend it over the bigger gimbals for anyone using a mirrorless camera and native lenses.

« How I used a portable image projector to create an 80s themed photo
Are these photographers cheating or does reality not matter anymore? »