Ever since I got to play with the original Zhiyun Crane at Photokina 2016 I’ve wanted to put one of these things to work and see how it handles. I’ve used a number of smaller gimbals for phones, but the ability to load up a DSLR or mirrorless camera offers huge benefits. I almost never invest in the first generation of anything, but then they released the Zhiyun Crane 2.

GearBest got in touch with us to see if we wanted to check one out for ourselves and how it might help with the content we create here on DIYP. With The Photography Show and other events coming up where we need to shoot video, it seemed like a great opportunity to give it a good workout and really put it through its paces. But it’s quickly become one of my favourite video creation tools.

As I mentioned, I’ve used several other smaller gimbals in the past, including Zhiyun’s own Smooth-C. So, I already had some idea of how to work with a gimbal for my own style and workflow. But when stepping up to something as beefy as the Zhiyun Crane 2 I had to relearn it all over again.

This is mostly down to the weight of the entire system. The Zhiyun Crane 2 has a load capacity of 3.2kg (7lbs), and the unit itself weighs a further 1kg. And you might have a microphone, external monitor, follow focus unit, or other things on top of this. So, while the theory of using is the same as those smaller gimbals, the weight increase means it’s not quite as easy to work with. One has to adapt.

You have to have a much stronger grip on the gimbal, which can transfer more vibration and movement to the camera than you’d like. The Crane 2 compensates well for that vibration, but the movement is something you can only fix with practice. And that added weight means that using it can get much more tiring more quickly, too. The dual handle grip can help to ease both of these issues, though. And the supplied tabletop tripod makes it very easy to set the gimbal down in between takes.

Another thing you can do to help ease the load a little is to mount it to a monopod. Underneath the gimbal handle is a 3/8-16″ socket with a 1/4-20″ adapter (for the tabletop tripod supplied with the Crane 2). This way, instead of having to hold it all the time, you can transfer the load to the ground and you’re just holding it upright. 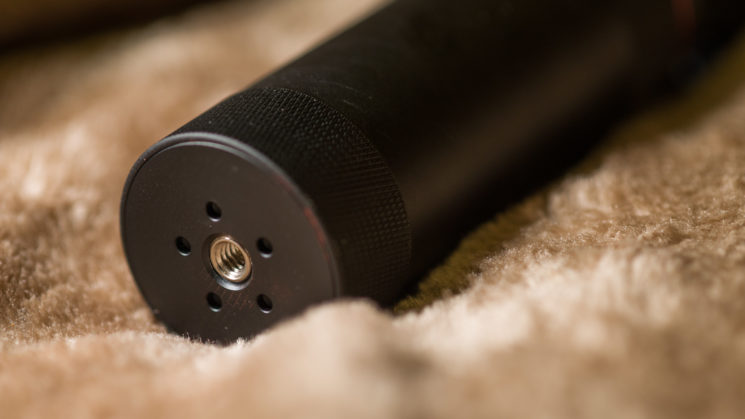 One of the great things about the Crane 2, though, is the battery life. So, if you start the day with a fully charged set of batteries and you do have to set it down regularly, then it’s not going to die quickly. It’s powered by three 18650 batteries which Zhiyun say offer up to 18 hours of continuous use. This will, obviously, depend on the weight of your camera and how well it’s balanced. 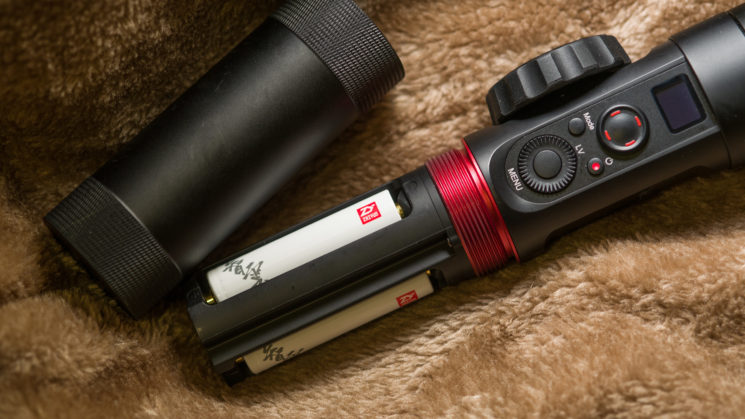 If you want to make life a little easier for yourself, I’d suggest getting the dual handle grip I mentioned earlier. This allows you to more easily smooth out your movements, as well as to better spread the load over both arms, making it easier to handle and get longer shots. 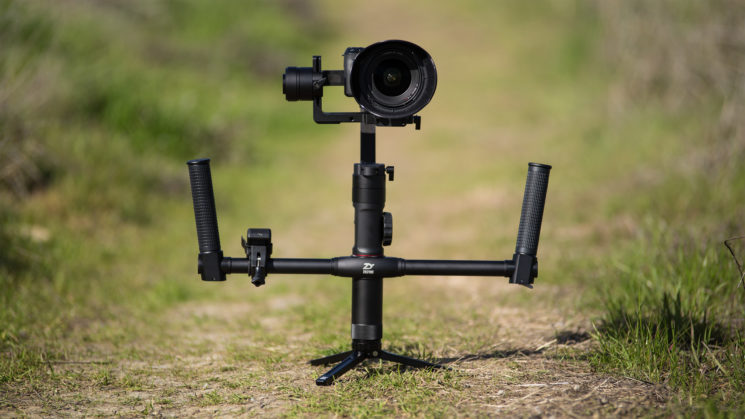 Many thanks to Michael Pohl for the use of this photo.

As well as more battery power the Crane 2 has stronger motors than its predecessor, capable of holding up to 3.2kg (7lbs). Zhiyun claim they have 50% more torque with less noise. For most of us, that capacity will more than satisfy our needs. I’ve typically been using it with a Nikon D800 and 28-70mm f/2.8 lens. It’s a decent weight, but nowhere near the Crane 2’s capacity, so it had no problem handling it.

The Crane 2 can also handle relatively light systems, too. I also use the Crane 2 quite often with a small Nikon D5300 and 18-55mm kit lens in order to shoot b-roll as it shoots 1080p at 60 frames per second for a little slow motion. Some Sony users have reported that you need to add some extra weight when using such small cameras, but I had no issues with that on the D5300 and it was extremely easy to balance. You will need to adjust the motor power to account for your camera weight in the menus, though. 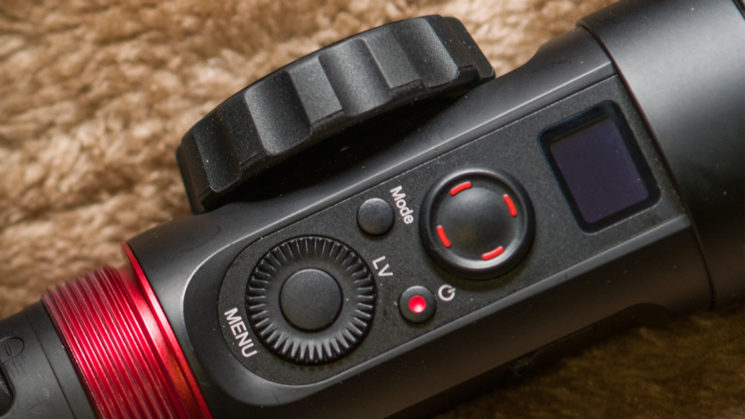 When using it, there’s an OLED on the front of the handle to show you the mode it’s currently in. And there are three of those. You’ve got follow, pan follow and lock mode. More modes, such as the new POV mode on the Crane Plus may be added in the future through firmware updates. This OLED also shows exposure information with Canon cameras. There’s no connectivity at all with my Nikons, and it doesn’t show exposure settings with Panasonic cameras. I haven’t had the chance to test Sony yet. It will let you stop and start recording via the handle’s UI with Canon, Panasonic and Sony, though. 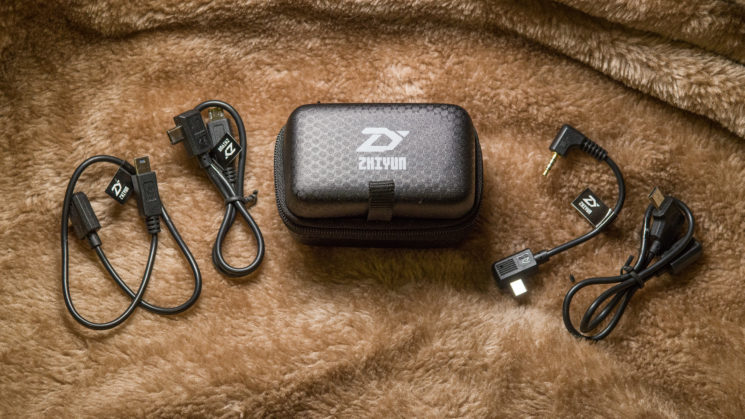 Also with Canon, you get to use the follow focus wheel. This is supported natively in the camera through Canon’s USB protocol. I tried this with the 5D Mark IIII briefly and it works very well. With Panasonic, Sony, Sigma and other camera brands (or when using manual focus lenses), the wheel will talk to Zhiyun’s new follow focus unit. I don’t have this, but I will definitely be adding it to the kit in the coming weeks.

The Crane 2 also offers Bluetooth connectivity to your phone or tablet. Personally, I’ve had mixed experiences with this. As firmware and apps update, things can break or be fixed on any given day. And sometimes certain features will work through the Android app but not the iOS app. At other times, it’s the opposite.

So, I’d say if you have a device that’s giving you the features you need with the app & firmware version you’ve got, don’t update right away when new ones come out. Wait and see if people complain about it in the Zhiyun Crane Facebook Group first. When it works, though, the remote control features, especially for timelapse, are extremely useful. And you will want to fire up the app at least once to fine-tune the speed settings when you first get it. This way, when you’re working in follow or pan follow mode you can get the smoothest results.

But even without the timelapse and other features of the app, and even without camera control to my Nikon cameras, the Crane 2 is an absolute joy to use. As with other types of motion control systems like sliders, or with other stabilisers, there is the risk of going overboard with it and shooting everything with it. But as long as you can keep that balance between gimbal, tripod, slider and other shots, it’s a very valuable tool to add to your arsenal. 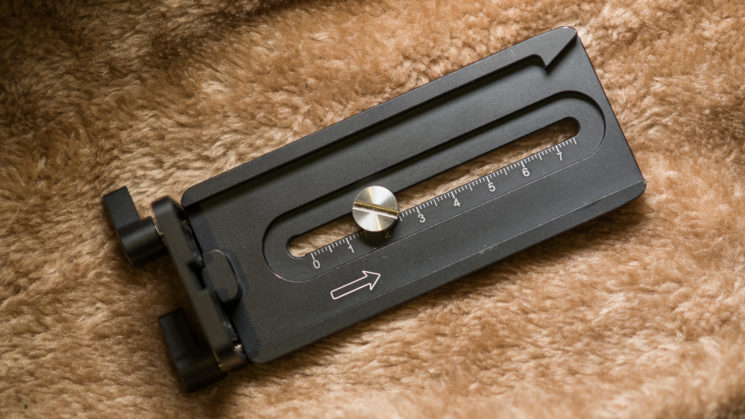 It’s also, somewhat, compatible with many other items one might find in their video arsenal, too. The camera mounts to the Crane 2 using a standard Manfrotto video plate. During The Photography Show, the video tripod I was using was also a Manfrotto. So, I had the plates from the tripod and the gimbal on the underside of two cameras and could freely switch either of them between tripod, slider and gimbal without any messing around switching plates.

And that’s been the biggest thing for me with the Crane 2. The time it saves. Not just switching out the camera to other devices, but to prevent the need for them all together. It allows me to get a pan of a scene, so there’s no need to even switch to a tripod. And it can even simulate a slider move with a little practice. That means less time spent, and it also means less gear I have to carry to a location.

That last con isn’t actually as bad as I initially thought, really. I got to have a brief look at a prototype of DJI’s new Ronin-S at The Photography Show last weekend, and overall it felt much heavier than the Crane 2. So, despite the weight, the Crane 2 may ultimately turn out to be the lightest handheld gimbal that can handle this kind of load capacity.

Thanks again to GearBest for sending this for us to check out. The Zhiyun Crane 2 is available to buy now for $749, and they have others available, too. but for this kind of load capacity and responsiveness, especially with the OLED display, the Crane 2 may be the only one you want to look at. It’s come with me on every video shoot I’ve done since I received it, and it’s become an extremely valuable tool in my kit.

Ultimately, though, whether you need a gimbal is up to you and your needs. But if you do need one, the Crane 2 is an amazing option – if you can live with the iffy firmware and mobile app updates.