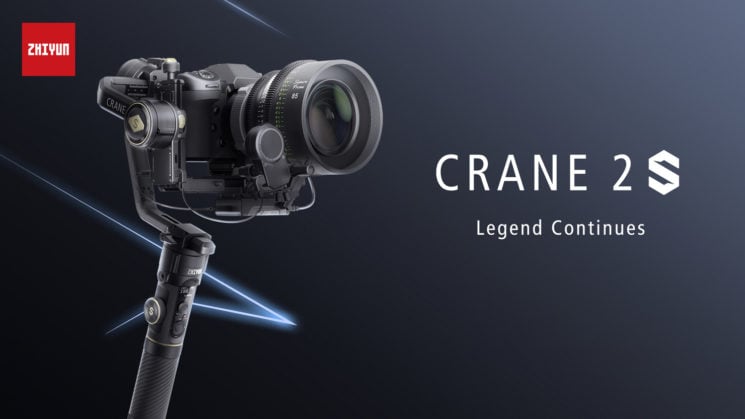 Zhiyun has today announced an update to their ever-popular Crane 2 gimbal. Not surprisingly, it comes in the form of the Zhiyun Crane 2S. Over the original, it offers increased load capacity, a more extensive camera compatibility list, axis locks, an improved follow focus wheel, larger OLED screen, more shooting modes to match the rest of the gimbals in Zhiyun’s current lineup and greater accessory connectivity.

I’ve had one here to play with for a couple of days so far, and we’ll have a much more extensive review coming in the near future, but here are some of its major features and differences over the original Zhiyun Crane 2.

As well as today’s announcement, Zhiyun will be hosting a live stream for the launch tomorrow (August 21st) on both Facebook and YouTube. It’s going live at noon GMT, so around 5am Pacific, 8am Eastern, 1pm UK time.

The Crane 2 has remained a staple amongst many filmmakers, despite the release of the heavy-duty Crane 3 LAB (review) and Crane 3S (review). The simplicity of the more traditional gimbal design means you can pack much lighter and is often easier to control in many circumstances. It’s three years since the original Crane 2 was released, though, and a lot has moved on in that time.

The Crane 2S features Zhiyun’s latest 9th generation Instune Algorithm to help ensure smooth and reliable performance for a more stable shot in a wider array of circumstances. It has all of the expected shooting modes, such as Follow, Pan Follow, Lock, Full-Range POV, Vortex and Go as well as panoramic, timelapse, motion lapse and long exposure timelapse modes through the ZY Play smartphone app.

It uses newer, more optimised motors to handle larger cameras and offers without the need for cages or offset plates to make wide cameras like the Pocket 4K fit onto the gimbal head a wider range of balancing movements to help you balance them. And, yes, the Crane 2S will even let you mount your camera vertically for when you want to get serious about your Snapchat, TikTok or Instagram Stories. 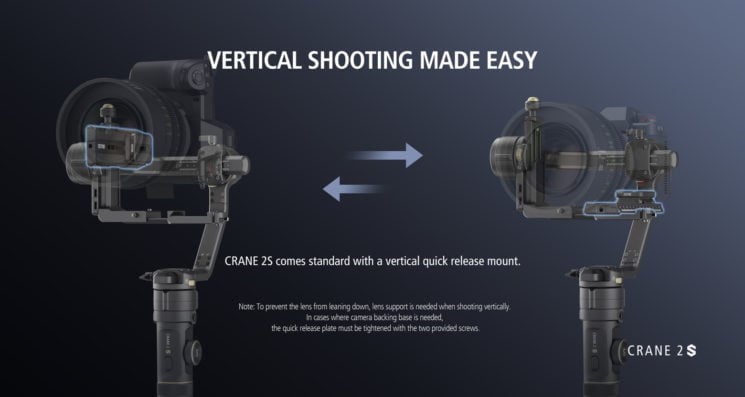 To see how small a camera I could balance on the Crane 2S, I mounted the Panasonic G80 with the 12-60mm kit lens vertically. It needed the assistance of the Godox XPro trigger to act as a counterbalance and give it a bit more weight on the left side, but it balanced flawlessly and handled rather well in my brief test. 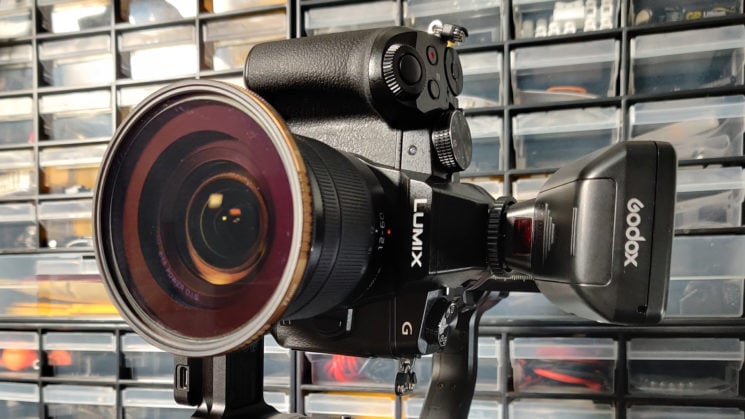 While the form factor of the Crane 2S remains largely the same as the original, it does have some notable differences. For a start, the metal handle that covers the battery compartment has been switched from metal to carbon fibre. This helps to reduce the weight a little, but it also means it won’t turn to ice when you’re shooting out in cold weather conditions. 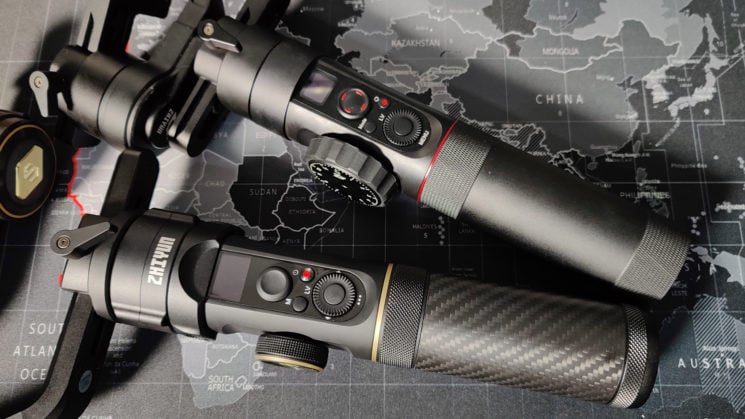 The Crane 2S has a new 0.96″ OLED display to help show information back to the operator more clearly and a new, smaller wheel on the side for adjusting your focus or zoom. It rotates much more firmly than the giant wheel on the original Crane 2 for smoother and more purposeful movements. Each of the axes now has a 2-way locking system, which lets you either move the arms freely during operation or lock each tight during balancing or transportation. 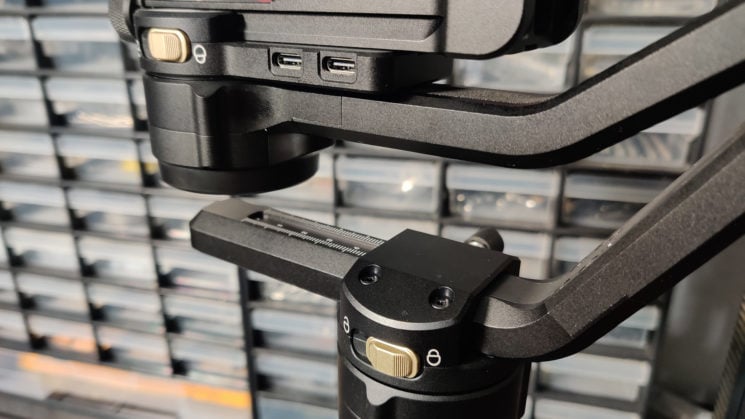 As well as new locking mechanisms for each axis, the mount to which you attach your camera has also seen a pretty significant redesign. Gone is the thumbscrew, replaced with the one-touch quick release lever that’s also present on the Zhiyun Crane 3S. The quick-release lever is also adjustable via a lock button underneath. So, if it’s a little too loose or a little too tight, you can quickly and easily adjust it. 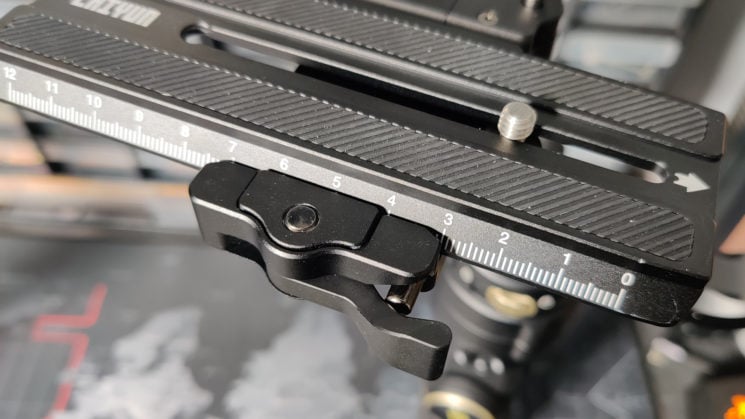 As well as allowing for wider cameras, the entire assembly carriage can even be completely removed from the gimbal. This allows you to quickly and easily shift your camera from the gimbal to a tripod or slider and then back to the gimbal without having to rebalance every time. The carriage contains a number of 1/4-20″ sockets underneath to which you can attach a second mounting plate for your tripod head. 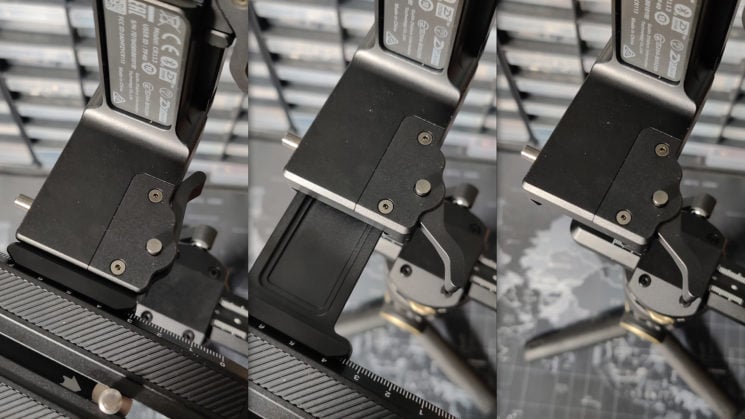 As well as wider cameras, the Crane 2S can take larger cameras in all three dimensions. You can see here with the Panasonic G80 balanced on the gimbal, just how much more room there is to slide in both horizontal and vertical axes. to accommodate larger cameras or for more easily balancing front-heavy rigs with longer and heavier lenses. 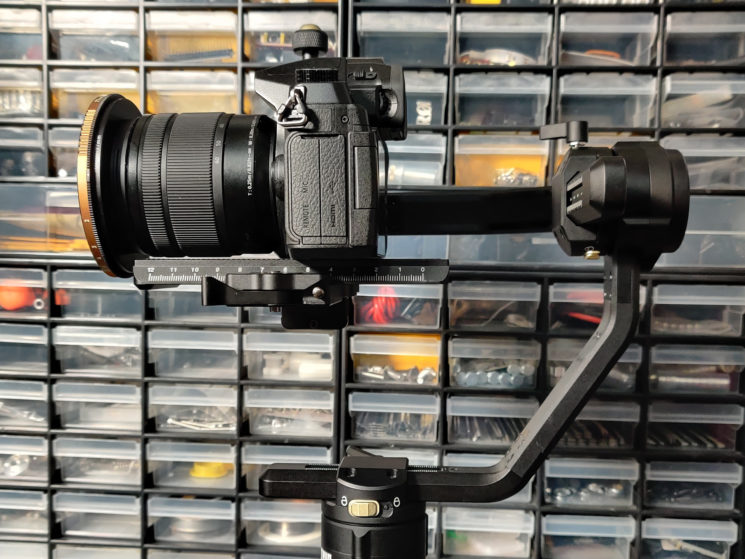 On the handle, there are also a pair of 1/4-20″ mounting sockets – one on each side. These allow you to connect other items, like a monitor or smartphone mount or a microphone (although it’s pretty easy to balance an on-camera mic with this, too). 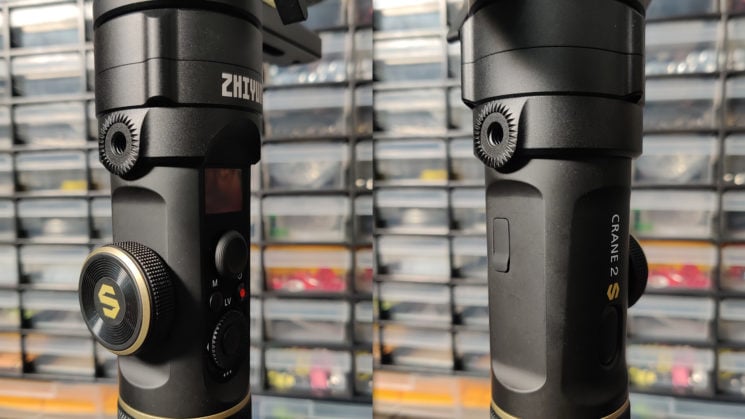 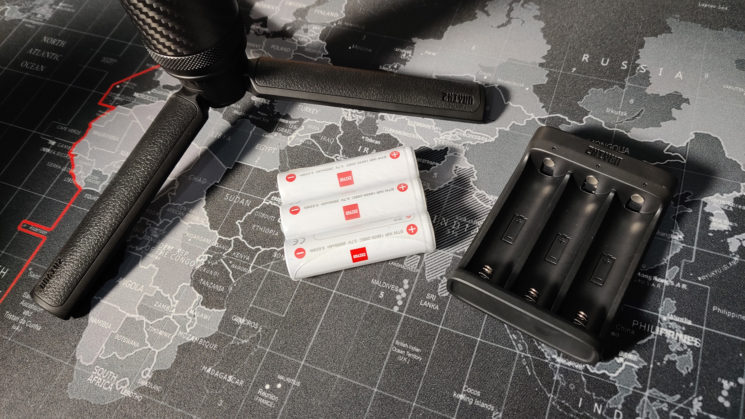 The Crane 2S does come with a bit of a weight increase over the Crane 2, coming in at 1,880g. But the payload capacity has also been increased. The Crane 2 could hold up to 3.2kg whereas the Crane 2S should hold up to about 4.5kg. While you might not need this extra load capacity, it does mean that at lower weights, the motors are running more efficiently which should prolong battery life – which is around 12 hours under normal use.

When it comes to camera connectivity, the list is about what we’d expect from this level of gimbal today. You can see the complete list here, but there are some notable inclusions (although capability does vary)…

Some newer mirrorless camera releases like the Sony A7S III, Canon EOS R5 and EOS R6 are not currently included in the list, but that does not necessarily mean won’t be compatible, just that they haven’t been tested yet. The new Nikon Z5 is on the list, as are the Nikon Z6 and Nikon Z7. The Panasonic GH5, GH5S, G9, S1 and S1H are also all listed.

As I mentioned earlier, I’ve only had this for a couple of days so far and I’ve been testing it with the Panasonic G80. But so far it feels like a pretty solid upgrade over the original Crane 2 so far. It has a higher max payload, it still handles pretty lightweight loads, it offers vertical shooting modes for social media and the workflow to mount, unmount and balance your camera is much easier.

Handling is pretty similar to the original Crane 2, although the new shooting modes offer a lot more options when it comes to what types of shot you can get, and I’m looking forward to see what I can get out of this in the coming days and weeks.

One thing to note is that the Crane 2S requires activation before you can use it. You need to do this through the ZY Play smartphone app for Android or iOS. This has started to become more common on gimbals these days, not just those from Zhiyun, but the process is quick and simple. It took me about 5 seconds to do. 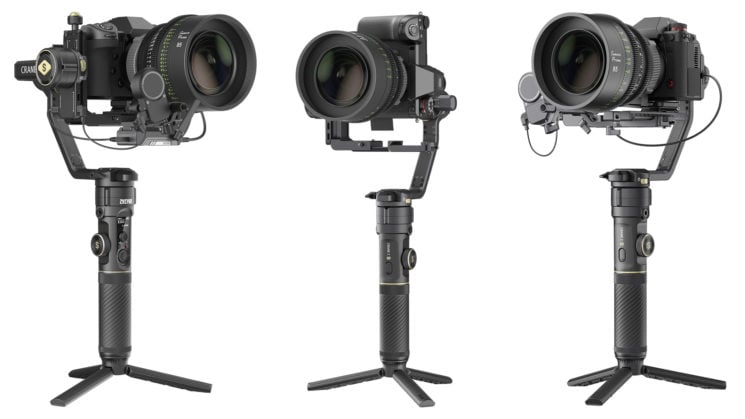 The Zhiyun Crane 2S will come in three packages. There is the Standard package with the mini tripod which is available to buy now for $599, the Combo package which includes the tripod, three extra batteries and the TransMount mini dual handle at $649 and there’s a Pro package coming that will be launched at the end of August. Zhiyun hasn’t told us what’s expected in the Pro package, but given the Crane 3S package, I think we can probably expect it to include the new focus and zoom motors.

We’ll have a full review coming soon, but for now, if you want to find out more about the Zhiyun Crane 2S, head on over to the Zhiyun Website.

And don’t forget to tune into that live stream tomorrow. You might see a familiar face.