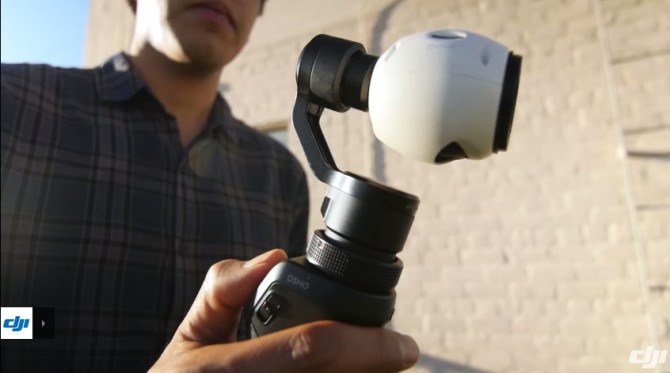 If you are following DJI, this will not come as a shock for you, and it is pretty much the obvious evolution in the company’s road-map. Today DJI announced that they are taking the camera off the drone and putting it in your hands. They announced the DJI Osmo.

The Osmo is an integrated device – a 4K camera permanently mounted on a 3-Axis Gimbal.

Here is the thing though, this is not a really a new product. DJI was making this (or similar) gimbals for the Inspire one for quite a while now, so moving the gimbal from the drone to your hands is a very easy (and very clever) integration to extend the product line.

As far as features, the basic unit comes with the same camera that the inspire 1 comes with – a 1/2.3 crop sensor that can shoot 4K. But the good news is that the Osmo can take the new Zenmuse cameras which are equivalent to 4/3 cameras like the GH4. This also mean that is you bought a Zenmuse for your inspire, it now can double as a hand held camera bringing more value to the gear.

Another big thing is the Osmo integration with a smartphone. When using the Osmo hand-held a smartphone acts as a monitor. But this is not all that a phone can do. To DJI GO app enables taking timelapses and hyper lapses, tripod-less ling exposure, or simply controlling the camera for a panorama. Here are the videos showing some of the features:

The Osmo is available for presale over at B&H for $649.00 and estimated to start shipping at the end of the month.

« The Social Media Fallacy – Does Social Media Generate Business Income?
This Timelapse Shows How A Gigantic 787-9 Dreamliner Airplane Is Built in 3 Minutes »