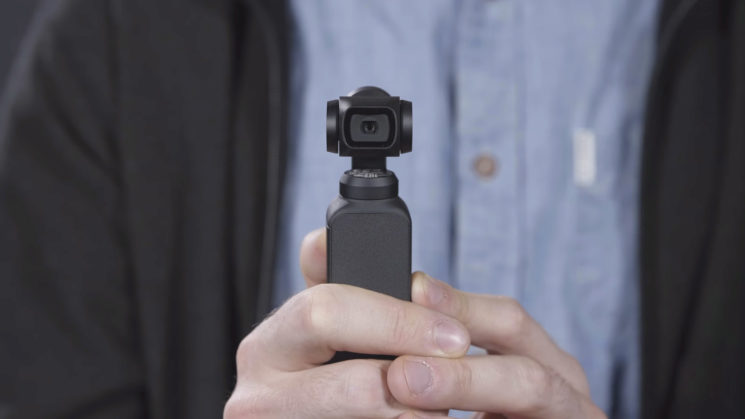 You might think that it looks like DJI just announced what is essentially their Mavic gimbal on a stick. And you’d be right, it does look a bit like that. But there’s a bit more to it than that. Yes, it’s a tiny 3-axis motorised gimbal, but this is no ordinary stick. This is the new DJI Osmo Pocket. A teeny tiny handheld 3-axis gimbal that shoots 4K 60fps video.

Its small stature means that it’s definitely not just pocket in name. It literally will fit right in your pocket. It’s only 4.8″ high and weighs a mere 4.1oz (116g), so it’s not going to be killing your arm on a long day’s shooting.

It has a built in LCD so that you can actually see what it’s pointed at, although you can plug your phone into the side of it for a larger display. And don’t be fooled by the Lightning plug in the YouTube title image above, it also comes with a Type-C adapter for the Android users. But it also offers WiFi and Bluetooth monitoring.

It features all the modes one would expect from a modern gimbal, including POV, ActiveTrack & FaceTrack modes, standard timelapse and motion lapse, as well as NigtShot and panoramic shooting modes. And a “Pro” mode enables you to manually adjust the camera’s ISO and exposure settings. The motors will pan from -230° to +50°, tilt from -95° to +50° and roll +/- 45°.

The DJI Osmo Pocket has a passive cooling system, so you don’t have fans to deal with being picked up by your microphone. Rechargeable batteries offer up to 140 minutes of record time when shooting 1080p (no word on 4K lifespan yet).

Obviously taking aim at the GoPro Hero7 Black, the DJI Osmo Pocket actually comes in a little cheaper. No electronic stabilisation here. It’s all mechanical. You can find out more on the DJI website, and pre-order the DJI Osmo Pocket now for $349, and ships in mid-December.