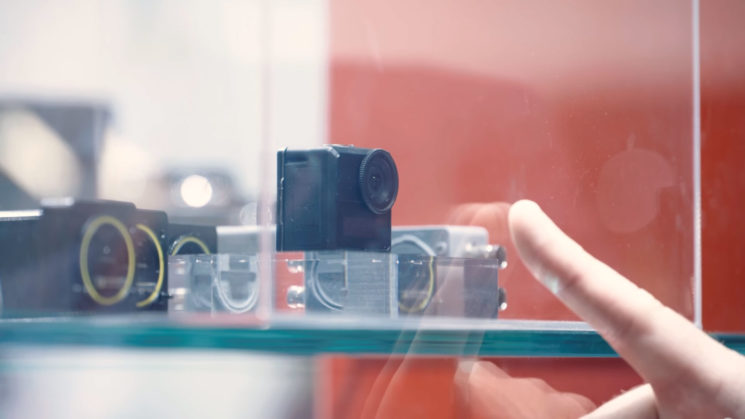 The idea of a modular camera isn’t all that new. And I don’t just mean being able to bolt on a microphone or a lens. Pretty much all of RED’s cameras are modular. You buy a “brain” and then you get all the associated bits and attachments to actually be able to shoot with it.

Now it looks like Canon are getting in on the modular action, although in a different sector of the market. In this short interview at IBC2017, Cinema5D talk with Marcel Hess from Canon Germany. They ask about some odd looking devices contained within a glass cabinet. It turns out that it’s a rather intriguing new camera. Well, parts of one.

It’s a tiny camera. A 4x4cm square from the front, which is only 2cm thick. The specs seem quite vague at the moment, and it looks like the announcement now is more of a fact finding mission to see what users really want.

But, the modules shown alongside the camera unit itself include two battery packs, SDI connector and network connector. Housed in 3D printed units, the modules don’t exactly look high end, but a great proof of concept.

From the video it seems that the market for these kinds of cameras is police and surveillance. Keeping things modular so that they can be reconfigured for specific needs is a great idea. Small systems like this also offer great options for wearability as body cams. And all you need to get started would be the camera module, a battery module and a microSD card.

Being modular, Hess says, means that it’s not limited to such tasks, though. The SDI connector suggests it’s also being aimed at higher end video than a simple body cam. That being said, it’s a fixed wide angle lens system. It’s splash proof and dust proof, but you can’t swap it out for something else.

Beyond that, there’s not really any information. No word on resolution, frame rates, bitrate, or anything like that. But, Canon may be setting their sights on the new Sony RX0.

It’s an interesting move. Normally Canon (and most other manufacturers) just say “Hey, here’s a new product”. But, here they are putting prototypes on display and actually asking people what they want.

I don’t know how much use this particular system might offer professional photo & video guys, but it’s an intriguing little camera. I see talk of “modular DSLRs” regularly popping up on the web every few weeks, something akin to medium format, or some of Nikon’s 35mm SLRs. So, I’d be curious to see if the idea of a modular camera eventually scales up to the world of DSLRs and mirrorless.

It looks like Canon is bringing IBIS to its DSLRs, too