The finalists of this year’s Wildlife Photographer of the Year contest include some really striking photos. But one of them illustrates how deep in trouble nature is. Justin Hofman took a sad photo which caused many reactions, and which will stick in our minds for a long time.

The photo features a tiny seahorse tightly grasping a pink, plastic cotton swab in the waters near Indonesian island Sumbawa. This poor animal, and many others, swim and drift surrounded b the enormous amount of trash and sewage.

Justin took the photo last year and recently posted it on his Instagram account. As he describes it, it’s a photo that “he wishes wish didn’t exist but now that it does [he] wants everyone to see it:”

What started as an opportunity to photograph a cute little sea horse turned into one of frustration and sadness as the incoming tide brought with it countless pieces of trash and sewage. This sea horse drifts long with the trash day in and day out as it rides the currents that flow along the Indonesian archipelago. This photo serves as an allegory for the current and future state of our oceans. What sort of future are we creating? How can your actions shape our planet?

As Justin explains, seahorses ride the currents by grabbing floating objects such as seaweed with their prehensile tails. This tiny creature was grabbing one piece of natural debris after the next, but everything changed when the tide came. This is when more and more unnatural objects started to emerge, such as plastic bags and other bits of plastic. At this point, the seahorse grabbed a long piece of clear plastic. From there, he went to grab the pink Q-Tip, which is when Justin took the photo.

Other than plastic, the sea was covered with a film of sewage sludge. As Justin, the seahorse and the Q-tip swam together, Justin got some water in the snorkel. As a result, he felt ill the following day.

As Justin explains, Indonesia has the world’s highest levels of marine biodiversity. However, at the same time, it’s second only to China as a contributor to marine plastic debris. The scary forecast is that this debris will outweigh fish in the ocean by 2050. But, the country has pledged to reduce by 70 percent the amount of waste it discharges into the ocean.

This photo Justin took has made me sad and worried.  I’m trying my best to contribute to the cleaner environment, but seeing this is a reminder how much more we all need to try. If you’d like to learn how to make a difference, visit SeaLegacy. For more of Justin’s work, visit his website and Instagram profile, and for more details about the contest, visit Natural History Museum’s website. 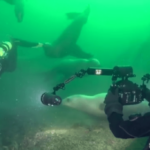 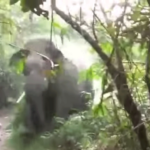