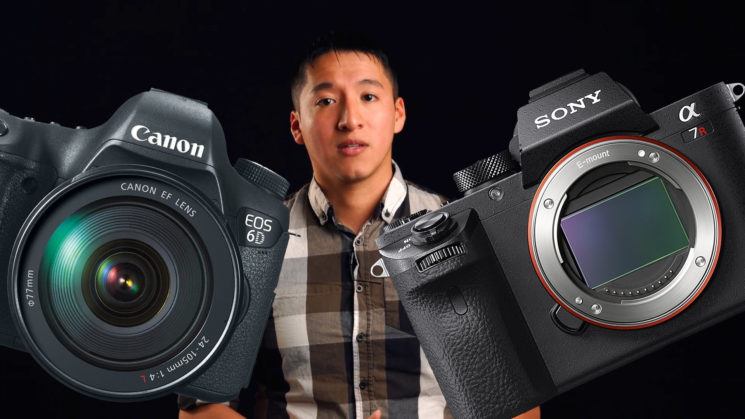 I know, I get it, you’re sick of all the “why I switched” posts, already. But, photographer Francisco Hernandez has some pretty compelling reasons for his switch from the Canon 6D to the Sony A7RII. Of course, the reason why anybody switches to or even initially chooses a particular brand or body are often personal reasons. They don’t apply to everybody.

So it follows then that some of Francisco’s reasons won’t apply to you, either. But, they’re still valid points. If they are things that you’ve been concerned about with your current system, such videos help you make decisions. No matter what camera system you might consider buying into, it’s a big expense. So, it’s a topic that one really can’t see too many opinions on.

While some of the features have made it into DSLRs and other non-Sony cameras, they’re not exactly coming at rapid pace. And some manufacturers have only included certain features (like tilt & flippy out LCDs) in their lower end models. Some other features, that have proven invaluable to Sony shooters don’t exist in other systems at all.

Sony’s eye autofocus, for example. The camera goes one step beyond the basic facial recognition to determine what are your subject’s eyes. it then tracks and focuses specifically on those eyes. For portrait shooters, this can be a huge time saver vs focusing and recomposing, or trusting your outlying autofocus points. Especially if you shoot lenses with super wide f/1.4 or f/1.2 apertures.

Adaptablity’s a big one, but it does depend on your needs. If you have a big stock of lenses already for a particular system, it’s always nice of you can still use them on a new one. Sony’s mount being so close to the sensor means that you have more options than almost any other system when it comes to using lenses from other systems. Sure, you can do it with Micro Four Thirds, too, but then you’re dealing with a 2x crop.

EVFs never really appealed to me, personally, not in the slightest. I can see why some see it as an advantage, but it’s just not for me. Same with the size/weight argument. After shooting big medium format and large format film cameras, I’ve yet to find a 35mm or smaller system that really annoys me when it comes to weight. Same goes for the in-body stabilisation and clear image zoom. They don’t really sway me. But, again, it’s a personal subjective thing.

4K video is basically the standard now, even though many manufacturers are still bringing out new cameras capable of only 1080p. But, there are other systems that possibly even exceed Sony when it comes to 4K video quality. Panasonic’s upcoming GH5, for example offers full 10Bit 4:2:2. An extremely welcome addition for many filmmakers. But, again, you’re dealing with a 2x crop.

The last point’s an interesting one. I don’t think Sony are perfect, by any means. But they do seem to bring out a lot of cool new toys. Even if they don’t always work as intended right away, they seem to fix it in the end.

The future of cameras from some companies doesn’t really seem all that certain. With the possible exception of the Nikon D500, it’s generally minor increments from one generation to the next. It seems like they’re almost afraid to do too much to new cameras, in case they run out of things to add.

Personally, I’m happy with my Nikons. I shoot Sony when I’m forced to, but they don’t really offer me anything I need over what I can already do. Switching to Sony or any other brand wouldn’t make my life any easier. And I think those are the most important factors when choosing to either buy into or switch to a particular brand.

Is it going to make your life easier? Is it going to let you do something you need that you can’t already do? If the answer to both of those questions is “no”, then don’t worry about it.

For Francisco, the answer to both questions is a resounding “yes”. For you, it might not be. There’s no point obsessing over what other gear might offer that you’d never utilise anyway. There’s certainly no point spending money on it.

Why the godfather of sports photography switched from Olympus to Canon. In 1976

« Your photos will get stolen. And what will you do then?
the most talented photographers talk about industry secrets for free »