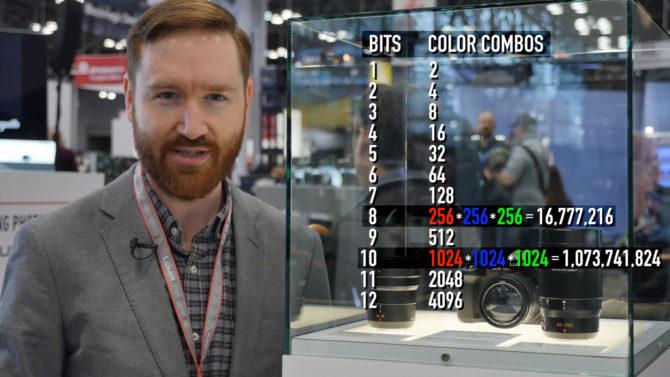 The new Panasonic Lumix GH5 will record 10Bit 4:2:2 video internally, but what exactly does that mean? how will it benefit you? Isn’t video just video? Why is this such a big deal? No, video isn’t just video, and it means quite a great deal.

The way most current DSLRs work is that they capture 8Bit 4:2:0 footage. This means for every group of 4 horizontal x 2 vertical pixels, it records colour from two of the top row, and zero from the second row. These colour pixels are then expanded to fill in the gaps.

10Bit 4:2:2 means that for each 4×2 pixel grid, 2 colour pixels are recorded from the first row, as well as 2 from the second row. This results in much cleaner footage for things like green screening. The colour around edges is more defined. The extra 2 Bits of data bump the number of possible colours each of those pixels can be from 1 in 16.7 million to 1 in over 1 billion possible colours.

The best possible amount of information 4:4:4 footage. This means that every single pixel in each 4×2 pixel grid of a sensor records its own unique colour information.

Do you really need it? Well, the answer is largely that “it depends”. If you’re basically shooting, editing and rendering straight back out with no colour correction or grading and no fancy special effects, then probably not. If you need to start doing chroma key, or colour grading, then it will make a big difference.

It’s a little bit like the difference between JPG and RAW (although 10Bit 4:2:2 still isn’t raw video). Sure, you can get a fantastic shot from a JPG if your camera’s set just right. But, if you decide you want to make changes to it in post, the information can degrade very quickly if you’re not careful.

A RAW file, on the other hand, contains so much “hidden” information that your monitor can’t display that pushing and prodding pixels in different directions doesn’t have as much of a negative effect. 10Bit 4:2:2 just gives you a lot more latitude in post to retain detail in the extremes, and more accurate colour information.

Previously, you’d need clean HDMI output from your camera to external recorders like the Atomos Ninja to get this sort of information. And still, most DSLRs would only output 8Bit. It was still better than recording internally to 8Bit 4:2:0, but nowhere near as good as 10Bit 4:2:2. At least, not from a post processing perspective.

Even if you decide that the GH5 isn’t the camera for your next video project, the fact that it offers 10Bit 4:2:2 internal recording is fantastic. It means that the other big players will hopefully also start to include it in their future generation of cameras.

What do you think? Has this got you excited for the GH5? Will you be considering adding one to your arsenal now? Had you already decided this was the next camera for you? Or are you holding out hope that your preferred manufacturer will now incorporate this in future models, too? Let us know in the comments.