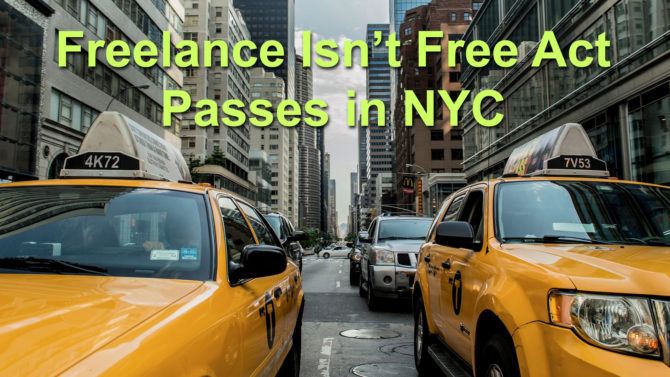 This has been a long battle, one that freelancers throughout the world can relate to. Late and non-payment from clients. The Freelancers Union estimates that there are around 55 million Americans freelancing across the country, that’s around a fifth of the adult workforce. New York City presents an even higher ratio. It is said that 38% of NYC workers are freelance with each losing $6,000 a year on average to delinquent clients. That adds up to a whole lot of money. As much as $4.7 billion.

Today, the first major victory in this battle has been won. the Freelance Isn’t Free Act has passed in NYC with a unanimous 51-0 votes. In short, what this means is tougher penalties for clients who pay late or don’t pay at all. There’s also more legal recourse for freelancers trying to recover payment. This is huge news, not just for NYC, but the whole country as other locations push for similar laws.

Personally, despite always having contracts, I have a policy of delivering nothing until I’m paid. I’ve worked as a freelancer in several industries over the years with this principle, and it’s mostly how I still work today. Late and non-payment was an issue for myself until I took the “no money, no delivery” stance.

Not all freelancers are in such a position to be able to do that. Many feel pressured into delivering for deadlines before payment is received, or they’re simply conned by fast talking clients. For some they believe it’s simply the way the industry works because it’s what they’ve always known. These new rules should help to raise standards, and ensure freelancers aren’t being screwed over. At least, in NYC.

This is what the Freelance Isn’t Free Act essentially means for NYC freelancers.

For those employers who are in breach of the new law, there are new remedies available to freelancers

It will be interesting to see how certain industries respond to these new regulations, where late payments are commonplace. Especially things like editorial and commercial photography where the freelancer may be at the end of a long chain of people through which money has to pass before it reaches them.

Congratulations to NYC freelancers on this one. Hopefully it’ll start to spread.

You can read the full Act and see the path it’s taken here.

What do you think? It’s great news for NYC, but will it help other areas with a high freelancer population? Will this spread to other cities, or is NYC a special case? Are you considering moving your freelance business to NYC for the extra protection now offered? Let us know and tell us your thoughts in the comments.

« This is what 10Bit 4:2:2 video actually means
Travelling with a light footprint »