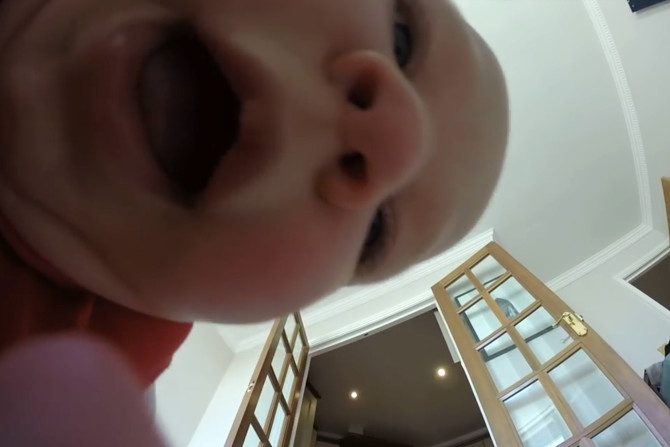 GoPro takes great pride in the durability of its cameras, which enables them to go to places where no camera has gone before.

When in the standard housing the GoPro is waterproof to 40 meters (131’) and while I don’t know of any official numbers, the camera is also incredibly shockproof.

We’ve seen it fall from insane heights, with or without a protective housing, and somehow survive.

Granted, though, most users aren’t all that into extreme sports and jumping out of space, so here’s a more ‘real-life’ durability test: a baby trying to eat a GoPro.

Personally this comes right on time for me as I’m about to become an uncle and need to know which of my camera gear is baby-proof.

Watch Jack Heyman‘s video as they baby eagerly crawls over to the GoPro HERO3+ to get a taste of it. The footage doesn’t show how it ended, but rumor has it the camera survived.

As mentioned, we’ve seen GoPros make it through some ridiculous situations such as a pack of annoyed lions, a fall from 3,000 meters, the scorching flames of a failed rocket test and even and 80,000 ft drop:

That being said, the action camera has met a few rivals it was unable to take on. A volcano is one of them.

Also, before you go and drop your unprotected GoPro from 80,000’, bear in mind that the ‘survivors’ you’ve seen above are most likely the exception rather than the rule.

Ever since it was launched, the GoPro has pretty much dominated the action-camera market, but Xiaomi’s Yi action cam has been getting a lot of attention due to its impressive specs and low price. In order to get a better understanding of how well these two cameras match up, I think the baby test should be added to the GoPro vs Xiaomi comparison.

Are Pentax Cameras *That* Weather Proof?