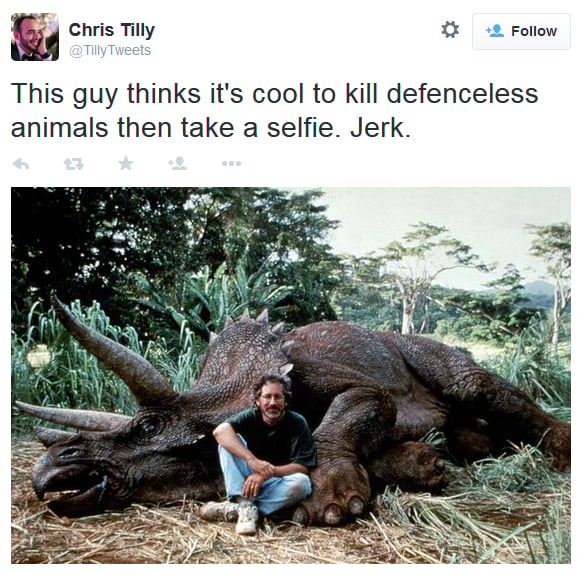 We’ve seen this before; hunters kill helpless animals and then hurry to have a photo taken with their ‘trophy’. Sometimes an unlucky hunter’s photo gets shared enough that it gains the internet’s attention and all hell breaks loose.

The bigger and more endangered the animal, the more respected these hunters are among their scumbag peers; but the criticism and hate messages they receive increase as well.

Keeping that in mind, imagine what happened when Chris Tilly jokingly posted a photo of Steven Spielberg next to a triceratops prop and blamed him for killing the ‘defenceless animal’.

This guy thinks it's cool to kill defenceless animals then take a selfie. Jerk. pic.twitter.com/WbgMklrd9u

When Tilly tweeted the rather famous photo from the 1993 Jurassic Park movie set, I assume he was just looking to have some fun ahead of the release of the latest installment in the series.

Little did he know that many people (and I mean waaay too many) would entirely miss out on the joke and really believe Spielberg just slaughtered the gorgeous creature a mere 65 million years, give or take a few million, after it went extinct.

Tilly shared the response below as one of his favorites:

Among the many tweets name-calling Spielberg (I like to think they didn’t recognize him) and calling BS on the animal being defenseless with those “giant horns and a beak”, was one in particular that is either very funny or very sad:

So barbaric that this should still be allowed… No conservation laws in effect wherever this is? https://t.co/hgavm9IBaM

For those who don’t recognize the name, Joyce Carol Oates is an award-winning author and was nominated twice for the Pulitzer Prize. The jury is still out on whether or not she was joking, but it doesn’t seem like she was.

Not willing to allow Spielberg to get away with some of his other cruel activities, photos from the Jaws movie set and E.T. have since showed up as well.

With his tweet going viral, Tilly has received every kind of response possible: some against the killing of extinct dinosaurs, some against the dumb people who believe Spielberg killed the animal and some actually explaining to him that it’s just a movie prop, in case he was unaware of the fact.

“I now no longer know if I’m being trolled, if people are in on the joke, if it’s causing genuine anger, or if society is simply doomed”, he later wrote.

William Jersey commented that “its the perfect example of how quick people are to outrage versus research”, and generally I’d agree; we often see misinformed outrage over the internet. On the other hand, should people really have to research anything to know that dinosaurs haven’t been here for quite a while now?

“The outrage here should be the misuse of the word “selfie””, said Tråvīšßäxtęr, and while that was my initial thought as well, I can’t help but wonder if the education system hasn’t become extinct as well.

By the way, obviously I don’t believe that the triceratops is real and that Spielberg actually killed it, but did you notice that there are no triceratopses in the Jurassic World trailer?

« A Nifty Cabinet To Hold Your Photography Gear
Tried and Tested: GoPro Cameras are Baby-Proof »