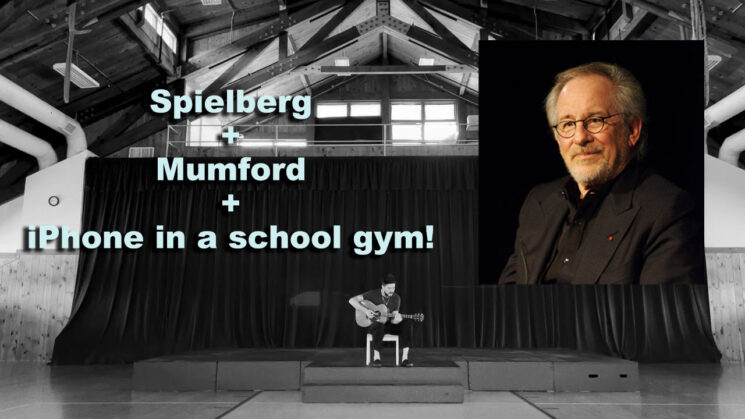 What happens when an award-winning director and a musician get together in a school gym with an iPhone? Well, from the looks of this latest music video released by Mumford of his song ‘Cannibal’, you get a pretty slick yet incredibly low-budget music video!

Steven Spielberg directed and filmed his first ever music video with Marcus Mumford. It was filmed and released just this month, and it’s honestly both pretty great and also quite reassuring at the same time! It’s also a one-take video, which is awesome.

I’ve been fascinated with one-take videos and scenes ever since seeing Justin Timberlake and La Blogotheque’s video for the song ‘Say Something‘. There is something theatrical and seemingly simple about them, however, the reality is incredibly technical and complicated. Usually.

Not so with Spielberg’s latest offering. It has the feel of being quite improvised, however, still works tightly with the highs and lows of the music. And of course, it was all filmed on ‘just’ and iPhone.

Now it just goes to show what can be achieved with very few tools these days. We have some incredible creative power in our pockets, and to create something beautiful and memorable doesn’t need to have huge production costs.

The video was all shot in a school gym, in a very mundane ordinary setting. Mumford is seated on a stage with just an acoustic guitar. The camera is closeup filming the fingers on the guitar’s neck, and then travels up towards the singer’s face.

There are admittedly a few jerky moments with zooming in and out which I admittedly don’t love. Presumably, these are the fault of the phone. From the images posted on Twitter, it looks as though Spielberg was just handholding the phone and using an office chair on wheels for the dolly zooms in and out! That’s my kind of dolly!

On Sunday 3rd July in a high school gym in New York, Steven Spielberg directed his first music video, in one shot, on his phone. Kate Capshaw was the almighty dolly grip. pic.twitter.com/9KUvONG4u3

The camera continues a steady zoom out until we see more of the room, with chairs stacked up on tables to each side. When the musical climax enters Spielberg rushes forwards and we are back to some great close-ups of the singer’s face, riding out the energy and emotion until the final chords die away.

I can’t believe this is Spielberg’s first music video, although maybe he’s been too busy with huge-budget Hollywood movies to pay much attention to the likes of music videos. But it’s a really interesting example and something that proves that we shouldn’t shy away from creating purely because we don’t have a large budget, epic locations, lots of gear and a large crew.

What do you think of Spielberg’s first music video? Is it a yay or a nay?

Photographer claims Gorillaz ripped off his idea for their music video

« How to shoot and produce a video series (almost) entirely on phone cameras
Publishing a photo book part one: The basics »