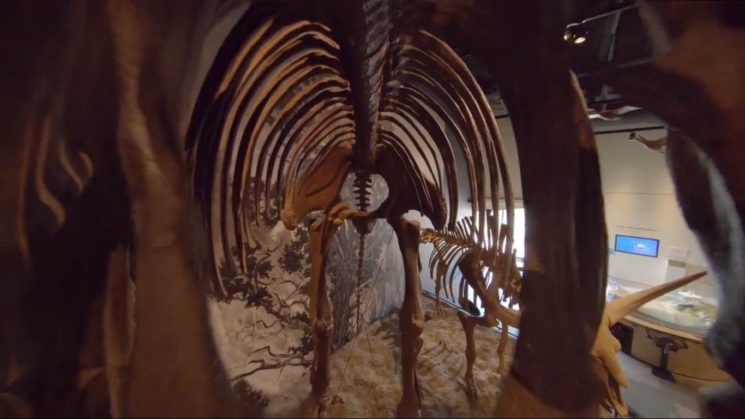 When you film even the most ordinary stuff with a drone, it gives them a completely new perspective. And sometimes, we see drone footage that combines this new perspective with both unusual subjects and a whole new level of skill. The latest work by filmmaker Robert McIntosh is exactly like that! Using one of his custom-made tiny drones, Robert takes you through dinosaur skeletons in this mesmerizing video from a Natural History Museum of Utah.

Perhaps you’ve seen some of Robert’s earlier projects here on DIYP. He’s a darn good pilot, he’s made his own drones before, and he has shot some awesome videos with them. This time, he’s made a drone tiny and lightweight enough so it can pass through dinosaur skeletons without hitting and damaging them. It probably goes without saying that he had permission from the museum to fly through its collection.

Robert used four small, lightweight propellers and added them a low-quality streaming camera. This camera allowed him to pilot the aircraft from a first-person perspective using a pair of video goggles. To shoot the video, the drone packs a modified GoPro HERO 6. Robert stripped it down to its basic electronic and power components in order to further reduce its weight and size.

Just like with his previous videos, Robert reversed the footage. He used ReelSteady to stabilize it in post, but he shared the raw version as well so you can see what it looks like unstabilized:

This video gives us an opportunity to see dinosaur skeletons from a totally unusual perspective, which is why I find it stunning. Plus, I’m impressed by Robert’s mad piloting skills, although, I must admit I was holding my breath while watching.

Photographer painted 20 models like skeletons to tell a story of love, just in time for Halloween

« Porsche: lighting and photographing the racing icons
These light painting celebrity portraits were created in a single take »